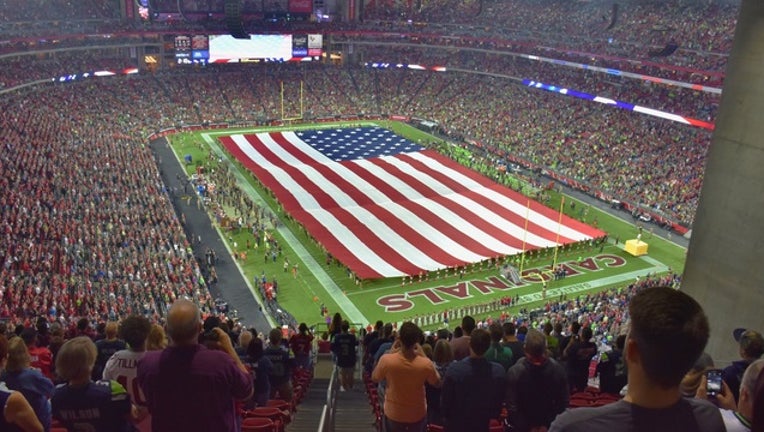 The proposed ad, which would have been printed in the official Super Bowl LII program, featured a color guard holding the American flag with a call to donate to AMVETS.

The NFL told Fox News they objected to the words "Please Stand" due to its political nature. The decision comes amid the controversy surrounding NFL players kneeling during the National Anthem, sparked by San Francisco 49ers quarterback Colin Kaepernick last season.

"The Super Bowl game program is designed for fans to commemorate and celebrate the game, players, teams and the Super Bowl. It’s never been a place for advertising that could be considered by some as a political statement," NFL spokesman Brian McCarthy told Fox News.

Dan Gainor, vice president of business and culture at the Media Research Center, told Fox News the NFL "has become too politically correct for its own good."

"It wouldn't let the Dallas Cowboys honor the slain police officers who died defending its citizens, but it bends over backward to support the anthem protests," Gainor told Fox News. "Now it won't even allow a fantastic organization to call for fans to stand up for our veterans. It turns out the NFL has been lying to us for years. It doesn't represent patriotic Americans. It doesn't represent veterans. It is simply a sport for whiny millionaires."

The NFL did not take issue with what some deemed a political Budweiser commercial that aired in the 2017 Super Bowl. That ad featured the story of the brand’s immigrant co-founder, Adolphus Busch, and his journey in the 1850s from Germany to the U.S., where locals tell him he should "go back home" and that he doesn't "look like you're from around here."

Budweiser Vice President Richard Marques said at the time it would be "foolish" to think the current political environment isn't fueling attention for the ad. Marques added that Budweiser, as a beer brand, is inherently bipartisan.

According to AMVETS, the ad was accepted by the NHL and the NBA.

McCarthy told Fox News that the NFL asked AMVETs to consider using the words "Please Honor our Veterans" or "Please Stand for Our Veterans" instead. The group rejected the suggested alteration. McCarthy said the back-and forth caused a production delay which resulted in a missed deadline for ad submissions.