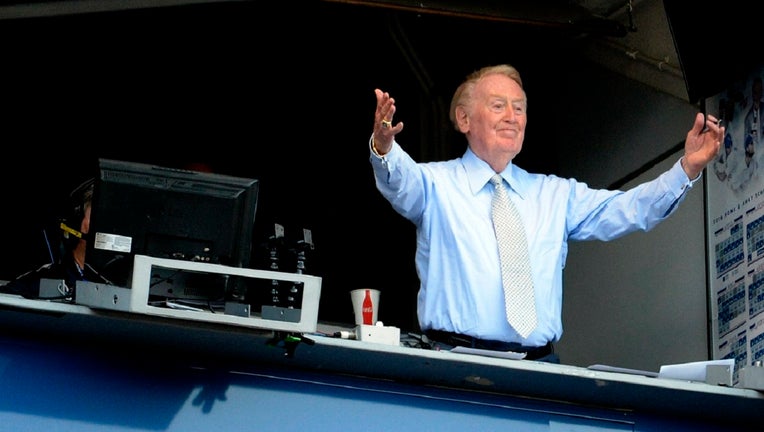 ATLANTA - It is not just fans of the Los Angeles Dodgers who are mourning the loss of legendary broadcaster Vin Scully, but all of baseball. Scully's 67-year run as the voice of Los Angeles baseball has had him cross paths with all of Major League Baseball, including the Atlanta Braves.

During his nearly seven-decade career, Scully would call countless home runs. For Dodgers fans, they may consider Kirk Gibson's two-run walk-off home run in Game 1 of the 1988 World Series his most iconic, but it was a game in Atlanta against the Braves where he said he would call the most important home run in history.

"I was so happy for him when he did it on our air, that at least we had the chance," Scully told Braves broadcaster Chip Caray in an interview shortly before his retirement in 2016.

"Fastball... It's a high fly to the deep left center field. Buckner goes back to the fence... It is gone!" Scully could be heard saying that night, but it might be what he didn't say that also had a tremendous impact. It was the half-minute of silence.

"And Henry's home run, Gibson's home run, all throughout my career, I like to call a play and then shut up because for a brief moment, I'm 8 years old again," Scully said. "I'm listening to the crowd."

Filling the void were the cheers of the crowd and the fireworks shooting off overhead.

"That's when I let it go for however long, and I stood there thinking about the impact, and the more I thought about it... That's what I said when the crowd died down, about what a great moment not just Henry, not just for the Braves, not just for baseball, this was the greatest impact at home run, sociologically," Scully said. "I mean, here is a Black man in the Deep South getting an absolute love ovation for breaking the record of a white icon. To me, that's what made that home run the most important home run that I ever called."

Scully would insert a little silence 21 years later on a crisp fall day in Atlanta. On Oct. 28, 1995, during Game 6 of the World Series, Scully would paint the picture of Atlanta–Fulton County Stadium on the radio that Atlanta Braves fans had waited 30 years to see.

"And the Atlanta Braves are the champions of the World!" Scully proclaimed. "And they are going wild!"

Scully told Caray why he chose to insert those dramatic pauses.

"It started when I was 8 years old growing up in New York and there wasn't very much around those times, maybe a Saturday afternoon college football game and I would crawl under a radio and listen to the game and it had no meaning to me, Tennessee-Alabama, but the crowd would roar and that crowd noise just absolutely intoxicated me. And so, I've always kept it," he said.

Scully said the thing he would miss the most during his retirement is the sound of the crowd, but whether Scully knew it or not, the crowd would miss his voice in equal measure.