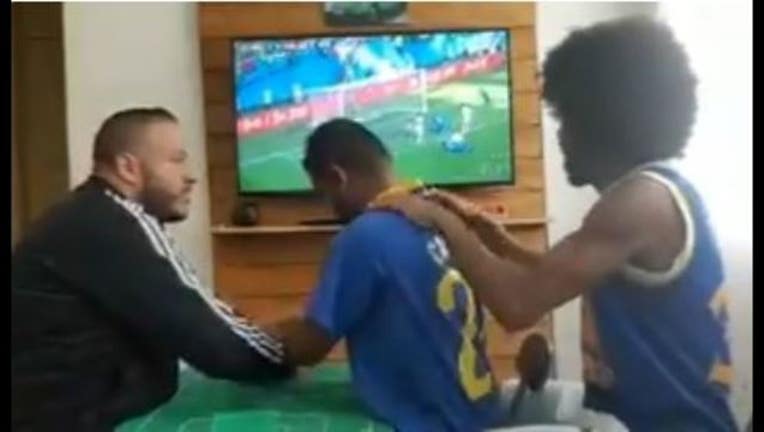 (WJBK) - A heartwarming video of a blind-deaf man celebrating a Brazil goal is inspiring thousands across the globe, illustrating the FIFA World Cup is bigger than just a tournament.

In the clip, massive Brazilian fan Carlos has his hands on top of another man's as he's signaling what's happening during the game on a model pitch, while another man is tapping signals on Carlos' back.

Carlos was born deaf and was diagnosed with Usher syndrome at just 14 years old, a rare genetic disorder that damaged his vision and ability to hear, according to sportbible.com. Though not completely blind, he has trouble seeing the TV — but that hasn't changed his love for football.

Back in 2014, Brazilian sign language instructor Hélio Fonseca de Araújo just wanted to watch the FIFA World Cup with his friend, so he researched the measurements of a football pitch and created a hand-made miniature model.

During a match, he places the model between himself and Carlos uses it to signal what's going on. This is Carlos and his friends watching Brazil take on Croatia during the 2014 tournament:

Hélio writes under the video that he uses Libras-Tactile sign language. Libras is another term for Brazilian Sign Language, and tactile signing is a type of communication using touch.

They signaled information during the game including fouls, cards, times, and numbers of the players.

The power of sports and friendship. Is somebody chopping onions in here?