Why did the sky turn orange?

After some dark skies and storms moved through Minnesota on Tuesday, you might have noticed a orangish tint in the sky.

(FOX 9) - After some dark skies and storms moved through Minnesota on Tuesday, you might have noticed an orangish tint in the sky.

Multiple viewers sent FOX 9 photos of the orange sky and we saw it ourselves as the skies outside our station in Eden Prairie turned an unusual color. 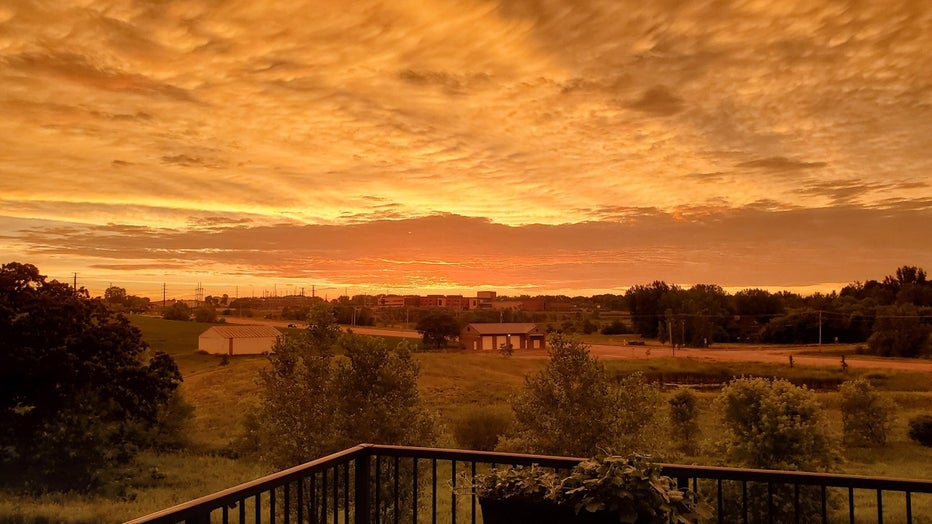 FOX 9's Ian Leonard explained the phenomenon during our newscast: "As scattered showers came through, we had an awful lot of moisture particulate matter suspended in the atmosphere. So, as the sun's angle begins to drop, instead of coming straight through the clouds, it's coming across the clouds. So you end up with the yellow, the orange, and, for a spell, an entire sky that was almost entirely bright gold. It was a very cool effect but has nothing to do with storms."

In a tweet, the National Weather Service for the Twin Cities added a little more detail.

"Behind thunderstorms in the evening, high clouds remain," the tweet reads. "The setting sun emits light that is bent with longer wavelengths. While the blue (shorter) wavelengths are scattered out, the yellow-orange-red part of the spectrum remain, thus producing the sky we're seeing tonight."

The golden skies in the Twin Cities weren't the only strange colors seen on Tuesday. The derecho that moved through South Dakota turned skies green for a brief period.