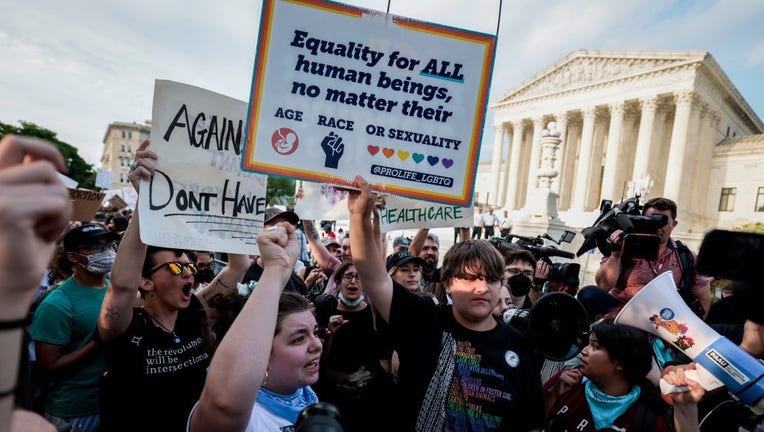 Anti-abortion rights demonstrators protest in front of the U.S. Supreme Court Building on May 03, 2022 in Washington, DC. (Anna Moneymaker/Getty Images)

WASHINGTON - The Supreme Court’s decision to overturn Roe v. Wade is expected to lead to abortion bans in roughly half the states.

But a recent poll of 1,000 registered voters conducted between June 12-15 — before the ruling but after the leaked draft opinion — shows that the abortion issue would not influence them when they cast their ballots in midterm elections this fall.

Where do people stand on the abortion issue?

The USA Today/Suffolk University poll found that Americans who oppose abortion rights said, by a 2-1 margin (59% to 29%), that the economy is a more important issue to them. Seven in 10 people said the Supreme Court’s ruling wouldn't impact their decision to vote.

The poll also found that 16% of people who opposed overturning Roe v. Wade said abortion was the most important issue for casting their vote, which is the same percentage of individuals who support overturning the ruling.

Thirty-nine percent of people in favor of Roe v. Wade said they would vote for a candidate they disagree with on abortion if they agreed with that individual on other issues. However, 45% of respondents to this question disagreed.

Most independents (64% to 23%) in the poll support abortion rights. However, a slightly wider margin (67% to 20%) said their attention is more on the economy than abortion. Seventy-four percent of this group said that the Supreme Court’s decision wouldn’t impact them heading to the polls for midterm elections, but 21% said the abortion issue would make them more likely to vote.

Twenty-six percent of respondents who support Roe v. Wade said they would be more likely to vote if the Supreme Court reversed the ruling.

Respondents also shared their personal experiences of knowing someone who’s had an abortion. A majority of people (58%-38%) said they knew someone in their family or a friend who had an abortion.

The U.S. Supreme Court has overturned the landmark 1973 Roe v. Wade case that legalized abortion nationwide, letting the states have the final say, according to the final opinion that was previously leaked but finally issued Friday.

The ruling on a case known as Dobbs v. Jackson Women’s Health Organization sets in motion a series of events that will likely lead to abortion being banned or severely restricted in roughly half of the 50 states.

The liberal justices on the high court, Stephen Breyer, Elena Kagan and Sonia Sotomayor, all dissented.

What does the reversal of Roe v. Wade mean for states?

Some states had already been preparing for the potential that the high court would weaken or overturn Roe, giving the states the power to decide the legality of abortion.

Twenty-two states, largely in the South and Midwest, already have total or near-total bans on the books, according to the abortion-rights think tank Guttmacher Institute. Aside from Texas, all had been blocked in court because of Roe.
Thirteen states have so-called trigger laws, which immediately ban abortion with Roe being overturned and presumably go into effect following the ruling.

US abortions rise: 1 in 5 pregnancies terminated in 2020

The number and rate of U.S. abortions increased from 2017 to 2020 after a long decline, according to new figures released last week by the Guttmacher Institute, a research group that supports abortion rights. The institute found that one in five pregnancies ended in abortion in 2020.

Texas saw a 2% decrease between 2019 and 2020, coinciding with pandemic-related abortion restrictions in the state.

Yet, abortions already were inching upward before the coronavirus upended people's lives. One contributing factor: Some states expanded Medicaid access to abortion.

Illinois, for example, began allowing state Medicaid funds to pay for abortions starting in January 2018. The state saw abortions increase 25% between 2017 and 2020.

In neighboring Missouri, abortions decreased substantially, but the number of Missouri residents traveling to Illinois for abortions increased to more than 6,500.

FOX 13 Tampa Bay, FOX 29 Philadelphia, and the Associated Press contributed to this story. This story was reported from Washington, D.C.