During a media briefing to update the status of NASA's Artemis I launch status on Tuesday, it was announced the relaunch date has been rescheduled for Saturday, Sept. 4 to give engineers time to address leakage issues.

All eyes are on Florida's Space Coast to see history in the making Saturday as NASA attempts to launch a mega moon rocket on a 37-day mission that will orbit the moon and return back to Earth.

The window for the second launch attempt of the Space System Rocket and Orion Spacecraft is expected to open at 2:17 p.m. on September 3.

"We are preceding into our Saturday launch attempt. We are comfortable with our risk posture. That said there is no guarantee that we are going to get off on Saturday, but we are going to try," Artemis mission manager Mike Sarafin said Thursday evening. "The technical teams have put in a tremendous amount of work in a very short amount of time to get us here."

Weather officers with the Space Force's 45th Weather Squadron continue to monitor a easterly flow off the Atlantic, which is expected to produce scattered showers and thunderstorms but the majority of the activity will be inland.

"The weather looks good. I wouldn't be shocked if there were periods where we are technically red for weather, but the bottom line is that I don't expect weather to be a show-stopper," Melody Lovin, weather officer with U.S. Space Force's Space Launch 45 group, told reporters. 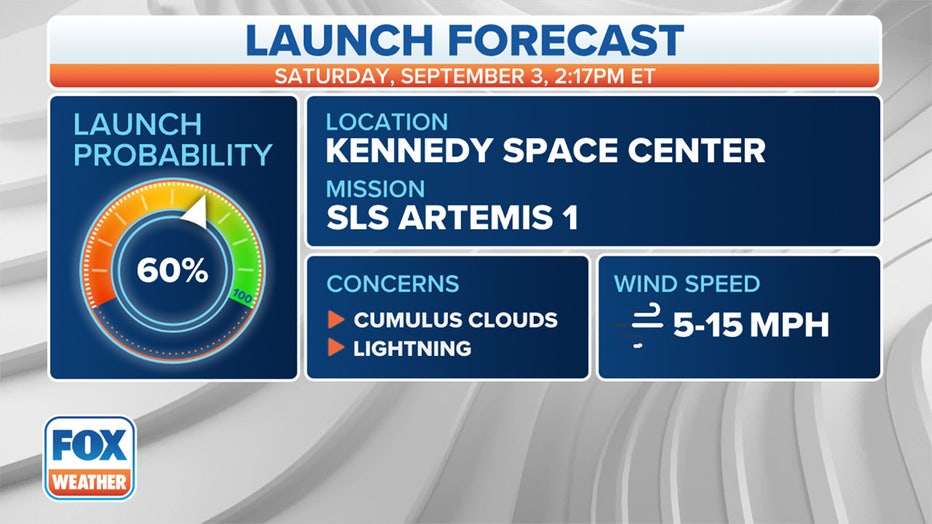 Forecasters believe cumulus clouds, rain and lightning could still be a threat and have given the rocket a 60% launch probability.

If the launch scrubs on Saturday, depending on the reason for the delay, NASA could try again Monday at 5:12 p.m.

Weather officers forecast the conditions will improve slightly for that two-hour window to 70% favorable. Cumulus clouds and lightning will again be the primary concerns.

"The later timing of the launch window Monday should allow a decent period of favorable weather as the Spaceport basks in the subsidence behind the departed sea-breeze boundary," according to the 45th Weather Squadron's latest forecast.

HERE'S WHY THE ARTEMIS 1 LAUNCH WAS SCRUBBED MONDAY

NASA’s first attempt to launch the Artemis 1 moon rocket from Kennedy Space Center in Florida on Monday hit a few snags during the countdown that caused the launch director to scrub the lift-off until a bleed issue with a rocket engine can be addressed and fixed.

A close lightning strike to the launch pad on Saturday did cause NASA teams to review systems for any potential damage. So far, the examination has come up clean, meaning the countdown continues.

WHAT IS NASA'S ARTEMIS 1 MISSION GOING TO DO?

It is summer in Florida, and any storms that roll in create increased cloud coverage, rain and lightning. This is problematic for the Space Launch System rocket which cannot fly through rain or clouds. Launch weather officers will be looking to thread the needle for the launch. 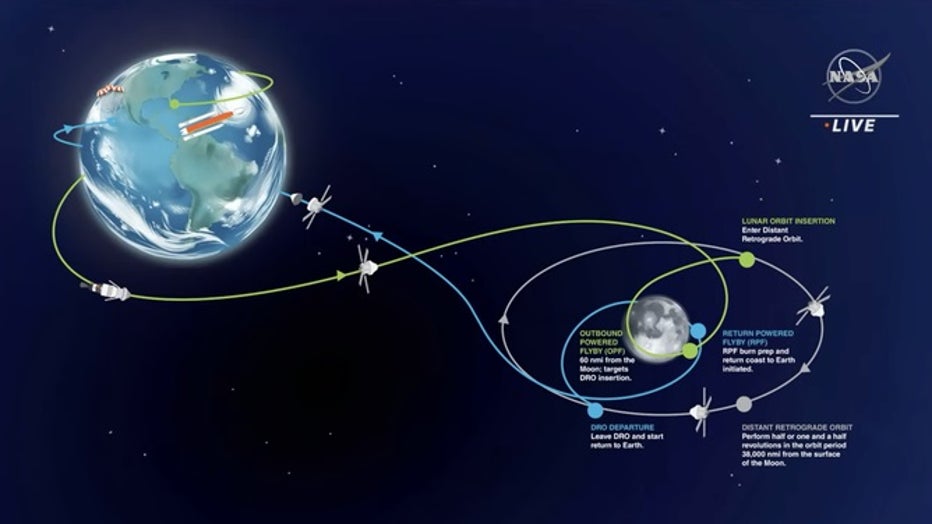 The SLS can only launch under specific weather criteria, including constraints regarding temperature, wind, rain, cloud cover and lightning.

The 322-foot-tall rocket requires more than 700,000 gallons of cryogenic fuel. Teams will not begin tanking the rocket with fuel if the temperature is more than 94.5 degrees Fahrenheit above 132.5 feet. Tanking cannot start under 41.4 degrees, but that won't be a problem for this August launch window.

Upper-level winds are also a factor. The rocket will not launch if mission managers believe winds could create a problem for the launch vehicle during ascent.

Cumulus cloud cover within a 10 nautical mile range could also delay the launch, depending on the clouds' type, distance and height. The launch director will not allow the countdown to continue if the SLS flight path is within 3 nautical miles of a thunderstorm debris cloud.

The launch complex must also be lightning-free for 30 minutes after lightning within 10 nautical miles is observed.

Lightning near the Kennedy Space Center delayed the SLS rollout to the launchpad last week. After it cleared, teams completed the 4-mile journey to launchpad 39B.

This story will be updated with new forecasts daily leading up to the Sept. 3 Artemis 1 launch.