Watch 16-year-old Oliver Shane Hawkins play with his late father’s band at a tribute concert for Taylor Hawkins in London.

Dave Grohl broke down in tears on stage while singing "Times Like These" at the Taylor Hawkins Tribute concert at London’s Wembley Stadium on Saturday.

The 53-year-old Foo Fighters frontman was performing with his band at the star-studded event that honored their late bandmate, who died unexpectedly in March at the age of 50.

"It's times like these you learn to live again," Grohl sang, clinging to the microphone as tears poured down his face. 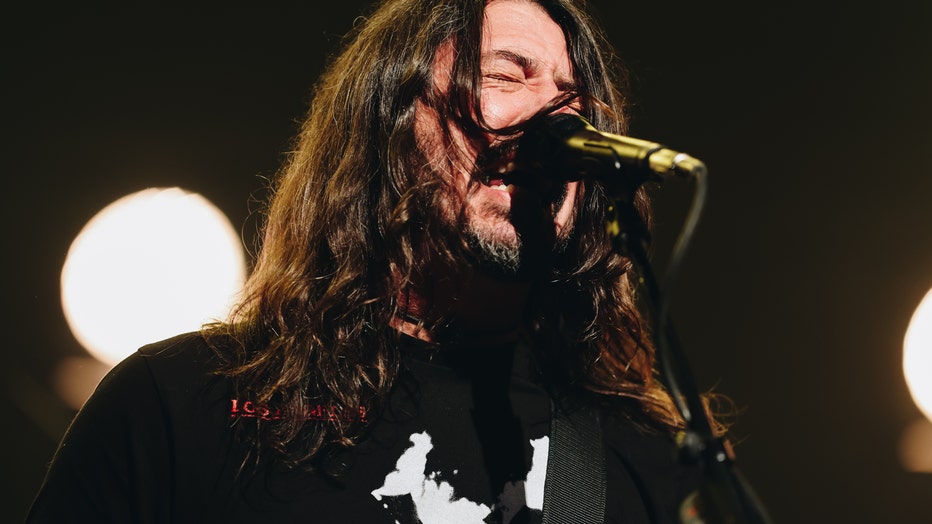 Dave Grohl of Foo Fighters performs onstage at the after party for the Los Angeles premiere of "Studio 666" at the Fonda Theatre on February 16, 2022 in Hollywood, California. (Photo by Rich Fury/Getty Images)

"It's times like these you give and give again," he continued, with his voice cracking on the last two words of the lyric.

The 18-time Grammy Award winner paused and wiped his face as the audience erupted in cheers of support. For a few moments, he struggled to continue with the performance before resting his forehead on the microphone and shaking his head.

Grohl gathered himself, though he was visibly overcome with emotion. He began singing again before launching into the next uptempo part of the 2002 hit as he rocked out with his bandmates. The poignant moment was quickly shared in clips that fans posted on Twitter. 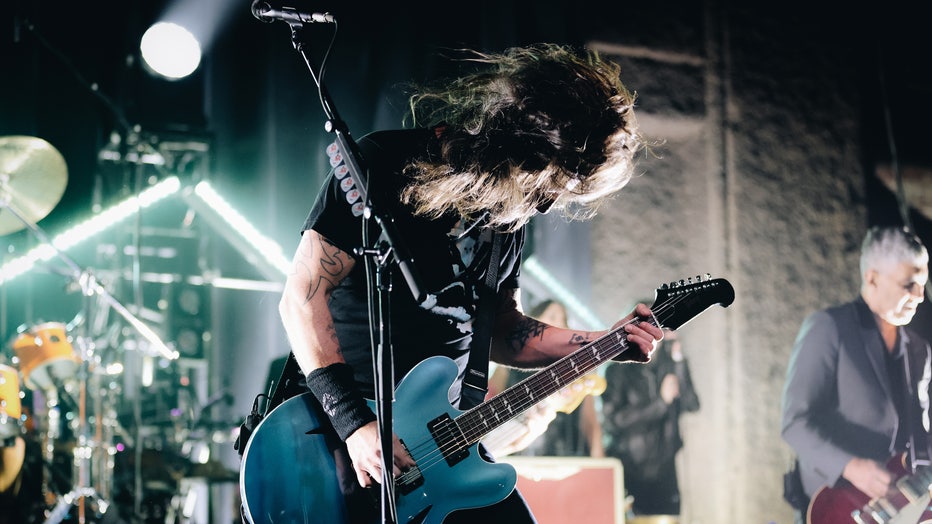 Dave Grohl of Foo Fighters performs onstage at the after party for the Los Angeles premiere of "Studio 666" at the Fonda Theatre on February 16, 2022 in Hollywood, California. (Photo by Rich Fury/Getty Images)

Saturday's six-hour-long concert featured an all-star line-up that included Dave Chappelle, Elton John, Paul McCartney, Jason Sudeikis, Liam Gallagher and Travis Barker, among others, as some of music's biggest names gathered to celebrate the life of the late drummer.

It was the first of two tribute concerts that the band's surviving members and Hawkins' family have planned to honor him. The second concert will take place on Sept. 27 at Los Angeles’ Kia Forum. Proceeds from both concerts will be donated to the charities Music Support and MusiCares. 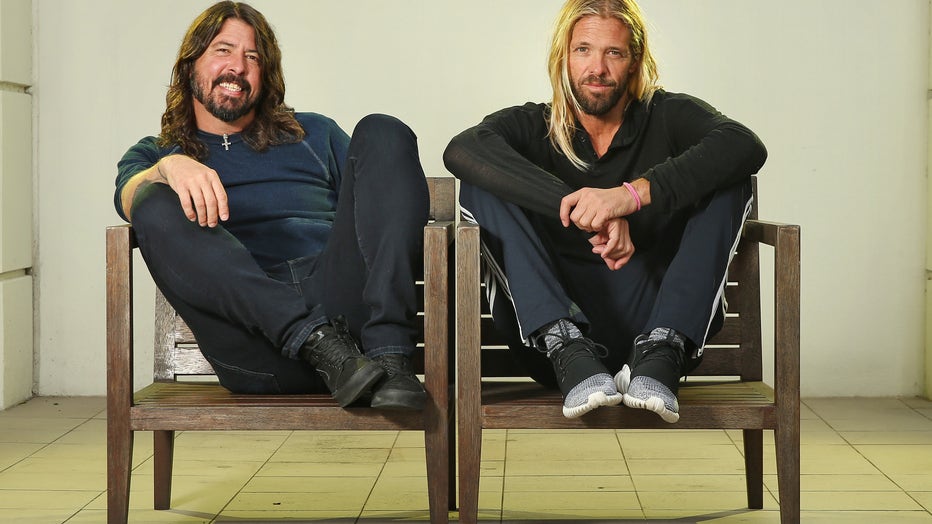 According to NME, Grohl kicked off the night with an emotional speech after the audience began chanting Hawkins' name, telling the crowd, "Ladies and gentlemen, tonight we've gathered here to celebrate the life, the music, and the love of our dear friend, our bandmate, our brother Taylor Hawkins."

"For those of you who knew him personally, you know that no one else could make you smile or laugh or dance or sing like he could," the hitmaker continued. "And for those of you that admired him from afar, I'm sure you've all felt the same thing."

Hawkins died on March 25 at the Four Seasons Casa Medina hotel in Bogotá, Colombia, hours before the Foo Fighters' scheduled performance at the Estéreo Picnic Festival. Emergency services were called to the hotel after he began experiencing chest pains. He was found unresponsive when they arrived and declared dead on the scene. 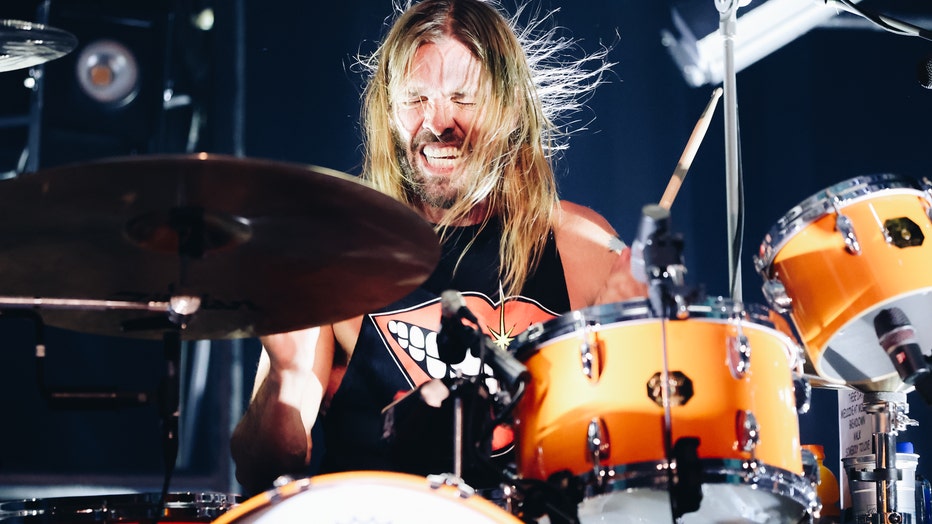 HOLLYWOOD, CALIFORNIA - FEBRUARY 16: Taylor Hawkins of Foo Fighters performs onstage at the after party for the Los Angeles premiere of "Studio 666" at the Fonda Theatre on February 16, 2022 in Hollywood, California. (Photo by Rich Fury/Getty Images)

The Attorney General's Office of Colombia announced the next day that ten different substances were found in a preliminary urine toxicology test, including opioids, benzodiazepines, THC and tricyclic antidepressants. An official cause of death has yet to be released.

In addition to being bandmates, Grohl and Hawkins shared an extremely close friendship. The musician referred to Hawkins as "my brother from another mother, my best friend, a man for whom I would take a bullet," in his 2021 memoir "The Storyteller".

After his death, the band released a statement on Twitter that read, "The Foo Fighters family is devastated by the tragic and untimely loss of our beloved Taylor Hawkins."

"His musical spirit and infectious laughter will live on with all of us forever. Our hearts go out to his wife, children and family, and we ask that their privacy be treated with the utmost respect in this unimaginably difficult time."

The band subsequently canceled all scheduled concerts in order to grieve the loss of Hawkins. Saturday's concert marked the Foo Fighters' first performance since Hawkins' death.