President Joe Biden, on the anniversary of the January 6 Capitol Riot in Washington, D.C., spoke about the insurrection, noting it was the first time a president who just lost an election tried to prevent the peaceful transfer of power. Biden says the rioters were looking to subvert the constitution and "they failed."

WASHINGTON - Rioters who smashed their way into the U.S. Capitol on Jan. 6, 2021, succeeded — at least temporarily — in delaying the certification of Joe Biden’s election to the White House.

Hours before, Rep. Jim Jordan had been trying to achieve the same thing.

Texting with then-White House chief of staff Mark Meadows, a close ally and friend, at nearly midnight on Jan. 5, Jordan offered a legal rationale for what President Donald Trump was publicly demanding — that Vice President Mike Pence, in his ceremonial role presiding over the electoral count, somehow assert the authority to reject electors from Biden-won states.

"I have pushed for this," Meadows replied. "Not sure it is going to happen."

The text exchange, in an April 22 court filing from the congressional panel investigating the Jan. 6 riot, is in a batch of startling evidence that shows the deep involvement of some House Republicans in Trump’s desperate attempt to stay in power. A review of the evidence finds new details about how, long before the attack on the Capitol unfolded, several GOP lawmakers were participating directly in Trump's campaign to reverse the results of a free and fair election. 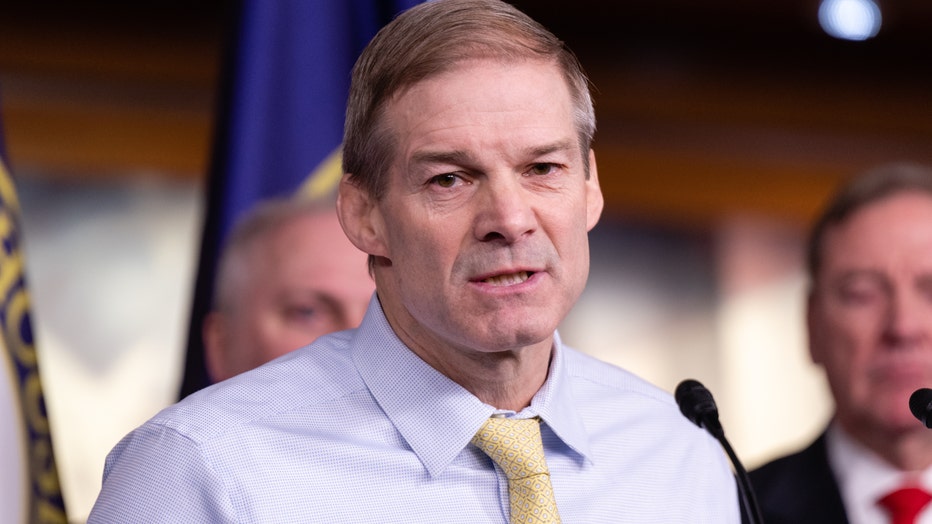 Representative Jim Jordan, a Republican from Ohio, speaks during a news conference at the U.S. Capitol in Washington, D.C., U.S., on Wednesday, Jan. 19, 2022. Photographer: Eric Lee/Bloomberg via Getty Images

It's a connection that members of the House Jan. 6 committee are making explicit as they prepare to launch public hearings in June. The Republicans plotting with Trump and the rioters who attacked the Capitol were aligned in their goals, if not the mob's violent tactics, creating a convergence that nearly upended the nation's peaceful transfer of power.

"It appears that a significant number of House members and a few senators had more than just a passing role in what went on," Rep. Bennie Thompson, the Democratic chairman of the Jan. 6 committee, told The Associated Press last week.

Since launching its investigation last summer, the Jan. 6 panel has been slowly gaining new details about what lawmakers said and did in the weeks before the insurrection. Members have asked three GOP lawmakers — Jordan of Ohio, Rep. Scott Perry of Pennsylvania and House Minority Leader Kevin McCarthy of California — to testify voluntarily. All have refused. Other lawmakers could be called in the coming days.

So far, the Jan. 6 committee has refrained from issuing subpoenas to lawmakers, fearing the repercussions of such an extraordinary step. But the lack of cooperation from lawmakers hasn't prevented the panel from obtaining new information about their actions.

The latest court document, submitted in response to a lawsuit from Meadows, contained excerpts from just a handful of the more than 930 interviews the Jan. 6 panel has conducted. It includes information on several high-level meetings nearly a dozen House Republicans attended where Trump's allies flirted with ways to give him another term.

The efforts started in the weeks after The Associated Press declared Biden president-elect. 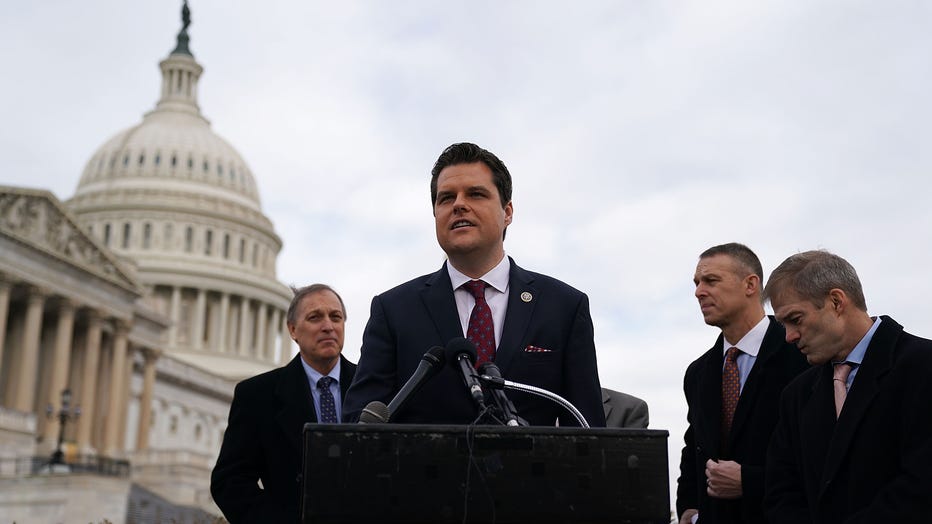 In early December 2020, several lawmakers attended a meeting in the White House counsel's office where attorneys for the president advised them that a plan to put up an alternate slate of electors declaring Trump the winner was not "legally sound." One lawmaker, Rep. Scott Perry of Pennsylvania, pushed back on that position. So did GOP Reps. Matt Gaetz of Florida and Louie Gohmert of Texas, according to testimony from Cassidy Hutchinson, a former special assistant in the Trump White House.

Despite the warning from the counsel's office, Trump's allies moved forward. On Dec. 14, 2020, as rightly chosen Democratic electors in seven states — Arizona, Georgia, Michigan, New Mexico, Nevada, Pennsylvania and Wisconsin — met at their seat of state government to cast their votes, the fake electors gathered as well.

They declared themselves the rightful electors and submitted false Electoral College certificates declaring Trump the true winner of the presidential election in their states.

Those certificates from the "alternate electors" were then sent to Congress, where they were ignored.

The majority of the lawmakers have since denied their involvement in these efforts.

Rep. Marjorie Taylor Greene of Georgia testified in a hearing in April that she does not recall conversations she had with the White House or the texts she sent to Meadows about Trump invoking martial law.

Gohmert told AP he also does not recall being involved and that he is not sure he could be helpful to the committee’s investigation. Rep. Jody Hice of Georgia played down his actions, saying it is routine for members of the president’s party to be going in and out of the White House to speak about a number of topics. Hice is now running for secretary of state in Georgia, a position responsible for the state's elections.

In a statement Saturday, Rep. Paul Gosar of Arizona reiterated his "serious" concerns about the 2020 election. "Discussions about the Electoral Count Act were appropriate, necessary and warranted," he added.

Requests for comment from the other lawmakers were not immediately returned.

Less than a week later after the early December meeting at the White House, another plan emerged. In a meeting with House Freedom Caucus members and Trump White House officials, the discussion turned to the decisive action they believed that Pence could take on Jan. 6.

Those in attendance virtually and in-person, according to committee testimony, were Hice, Biggs, Gosar, Reps. Perry, Gaetz, Jordan, Gohmert, Mo Brooks of Alabama, Debbie Lesko of Arizona, and Greene, then a congresswoman-elect.

"What was the conversation like?" the committee asked Hutchinson, who was a frequent presence in the meetings that took place in December 2020 and January 2021. 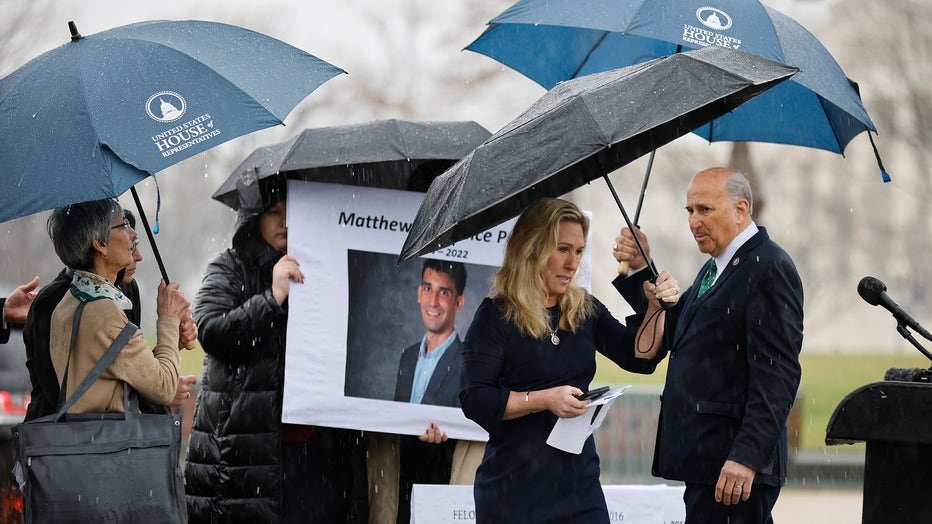 WASHINGTON, DC - MARCH 17: Rep. Louie Gohmert (R-TX) (R) and Rep. Marjorie Taylor Greene (R-GA) (C) hold a news conference in the rain outside of the U.S. Capitol on March 17, 2022 in Washington, DC. The conservative members of Congress used the news

"They felt that he had the authority to, pardon me if my phrasing isn’t correct on this, but — send votes back to the States or the electors back to the states," Hutchinson said, referring to Pence.

When asked if any of the lawmakers disagreed with the idea that the vice president had such authority, Hutchinson said there was no objection from any of the Republican lawmakers.

In another meeting about Pence's potential role, Trump lawyers Rudy Giuliani, Sidney Powell and Jenna Ellis were joined again by Perry and Jordan as well as Greene and Lauren Boebert, a Republican who had also just been elected to the House from Colorado.

Communication between lawmakers and the White House didn't let up as Jan. 6 drew closer. The day after Christmas — more than two months after the election was called for Biden — Perry texted Meadows with a countdown.

"11 days to 1/6 and 25 days to inauguration," the text read. "We gotta get going!" Perry urged Meadows to call Jeffrey Clark, an assistant attorney general who championed Trump's efforts to challenge the election results. Perry has acknowledged introducing Clark to Trump.

Clark clashed with Justice Department superiors over his plan to send a letter to Georgia and other battleground states questioning the election results and urging their state legislatures to investigate. It all culminated in a dramatic White House meeting at which Trump considered elevating Clark to attorney general, only to back down after top Justice Department officials made clear they would resign.

Pressure from lawmakers and the White House on the Justice Department is among several areas of inquiry in the Jan. 6 investigation. Rep. Jamie Raskin, a Democratic member of the panel from Maryland, has hinted there are more revelations to come. 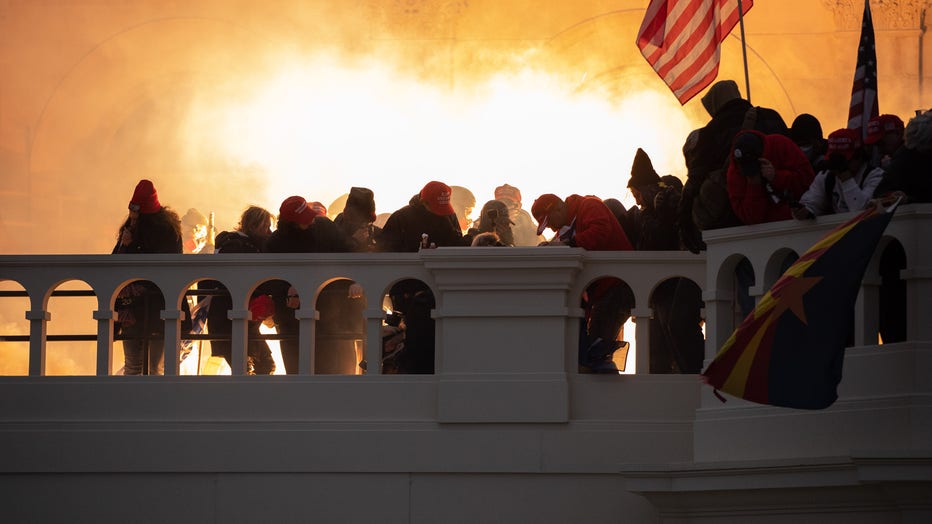 "As the mob smashed our windows, bloodied our police and stormed the Capitol, Trump and his accomplices plotted to destroy Biden’s majority in the electoral college and overthrow our constitutional order," Raskin tweeted last week.

When the results of the panel's investigation come out, Raskin predicted, "America will see how the coup and insurrection converged."