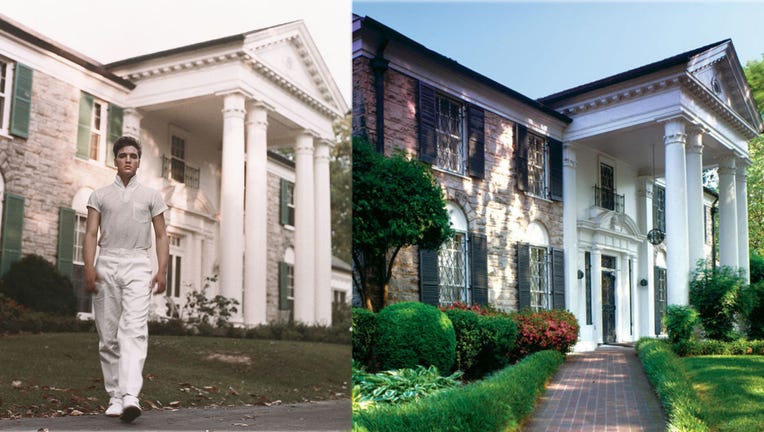 (L) Elvis Presley strolls the grounds of his Graceland estate in 1957, alongside (R) an exterior view of Elvis Presley's house Graceland in 2018. (Photos by Michael Ochs Archives & GAB Archive/Redferns/Getty Images)

MEMPHIS, Tenn. - Millions of music fans have made the rock ‘n’ roll pilgrimage to Graceland, the estate of the late Elvis Presley that remained his home base throughout the height of his success — and ultimately became his final resting place.

Graceland on Tuesday celebrated its 40th anniversary of opening to the public in Memphis, Tennessee. On June 7, 1982, a blue ribbon-cutting ceremony was held by Elvis' aunt, Delta Presley Biggs, and CEO Jack Soden, officially opening the mansion’s doors for fans to experience his long-time private retreat through live tours.

Graceland has since welcomed more than 22 million paid visitors over the past four decades and has become one of the most famous homes in the world, joining the ranks of famous residences like the White House and Buckingham Palace.

Residents at an Australian nursing home were recently greeted to visits from "The King."

Graceland was once part of a 500-acre farm owned by the family of S.E. Toof, a prominent Memphis businessman. The land had been in the family for generations and was named after one of the female relatives named Grace, according to an official history online. In 1939, Grace's niece, Ruth Brown Moore, and her husband, Dr. Thomas Moore, built the mansion.

In 1957, a 22-year-old Elvis had been catapulted to super-stardom over the previous year with historic network television appearances and gold record awards. He bought the Graceland home and grounds in March 1957 for just over $100,000 for him and his parents, Vernon and Gladys Presley. At that time, Elvis was working on his second film "Loving You," with "Jailhouse Rock" to soon follow.

"With a sound and style that uniquely combined his diverse musical influences and blurred and challenged the social and racial barriers of the time, he ushered in a whole new era of American music and popular culture," the Graceland history page notes.

During his career, Elvis starred in 33 successful films and has sold over one billion records globally — becoming known worldwide by his first name. Throughout his success, the "King of Rock ‘n’ Roll" acquired various homes in the Los Angeles area and spent much of his time on the road, but Graceland remained "a constant in the life of Elvis Presley" for the next 20 years, according to its history page. 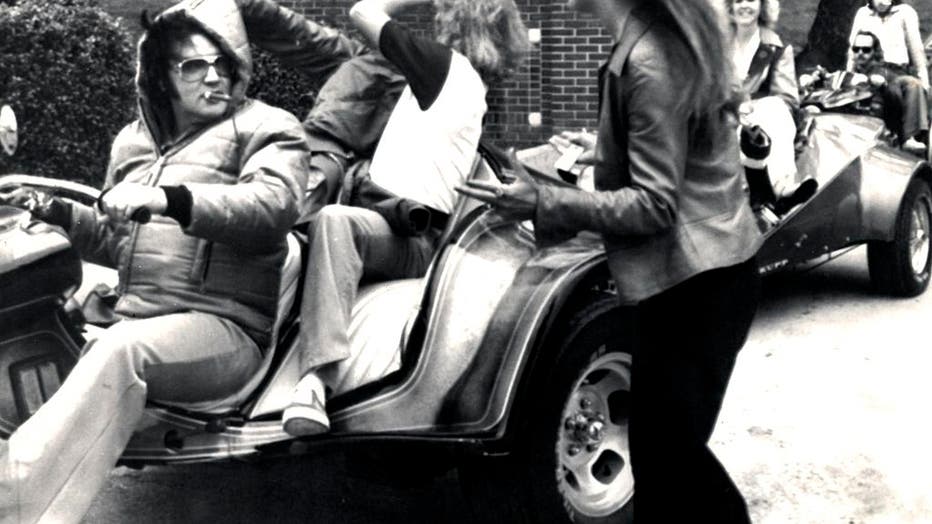 Residents of Graceland included Elvis’ parents and his grandmother, Minnie Mae — all of whom are now buried at the Meditation Garden at Graceland. Other family members lived at Graceland over the years, such as Aunt Delta — who lived there when it first opened for tours and continued to reside there with her dog, Edmond, until her death in 1993.

What happened to Graceland after Elvis’ death?

Elvis died in his master suite at the Graceland estate in August 1977 due to heart failure. The official history page describes Elvis as having been not one to "worry about financial planning," and instead enjoyed and shared his wealth during his lifetime.

"While the estate he left was by no means broke, there was a cash flow problem, especially with Graceland costing over half a million dollars a year in maintenance and taxes," Graceland’s website states.

Lisa Marie Presley, the only child of Elvis and ex-wife and actress Priscilla Presley, was among the beneficiaries of his estate, as well as executor Vernon Presley (his father) and Minnie May (his grandmother).

But Elvis’ will noted how Lisa Marie’s inheritance was to be held in trust for her until her 25th birthday in 1993.

Vernon Presley’s will appointed three co-executors/co-trustees to succeed him: the National Bank of Commerce in Memphis, which was the bank Elvis and Vernon had done business with, Joseph Hanks, who had been Elvis and Vernon's accountant, and Priscilla Beaulieu Presley, who had divorced Elvis in 1973 but continued a close friendship with him and was Lisa Marie's legal guardian.

Considering the cash flow problem of the estate, it became logical for Priscilla and the executors to open Graceland to the public, according to its history page. In late 1981, they hired Jack Soden to plan and execute the operation — ultimately opening to the public the next year. 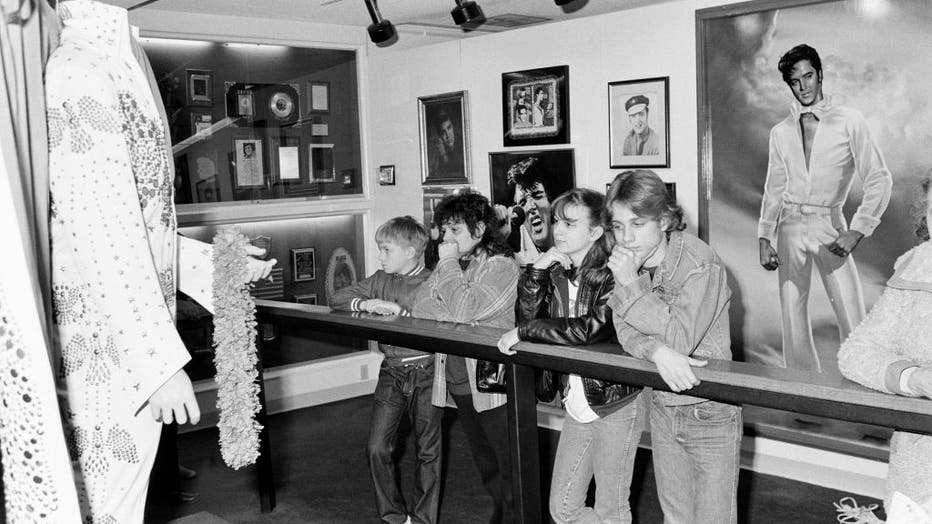 Today, fans who take part in the Graceland mansion audio tour can see the living room, his parents’ bedroom, the kitchen, TV room, pool room, the famous Jungle Room, his father’s office, the Trophy Building, Elvis' racquetball building, and Meditation Garden where Elvis and family members were laid to rest.

Many of the decor elements inside the mansion span all the Elvis eras, but primarily focus on the late 1960s to early 1970s. 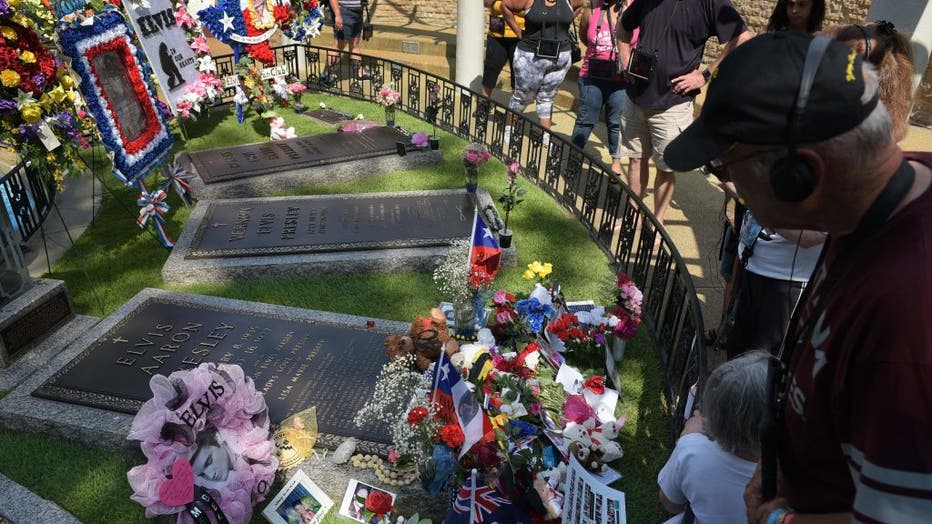 Fans file past the grave of Elvis Presley in the Meditation Garden where he is buried alongside his parents and grandmother at his Graceland mansion on Aug. 12, 2017, in Memphis, Tennessee. (Photo credit: MANDEL NGAN/AFP via Getty Images)

Graceland highlights since its opening

Feb. 22, 1984: Elvis’ jet, the Lisa Marie, arrives in Memphis and is brought down Elvis Presley Boulevard to its present location.

June 12, 1989: The Elvis Presley Automobile Museum opens at Graceland in the first new construction on the Graceland campus. Vernon’s Office also opens as part of the Graceland Mansion tour.

Nov. 7, 1991: Elvis Presley’s Graceland is placed on the National Register of Historic Places. 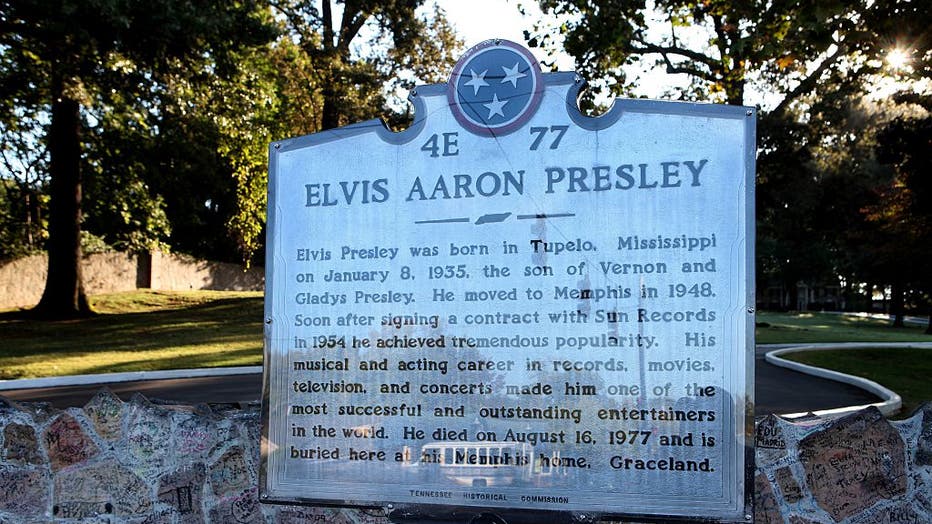 1994: Graceland makes the switch from live tour guides to audio tours, while the kitchen is added to the Graceland Mansion tour.

May 11, 1997: Gladys and Vernon’s bedroom is added to the Graceland Mansion tour on Mother’s Day.

October 27, 2016: The Guest House at Graceland opens, "fulfilling a dream of Elvis’ to build a state-of-the-art guest house for visitors to his home," the website states.