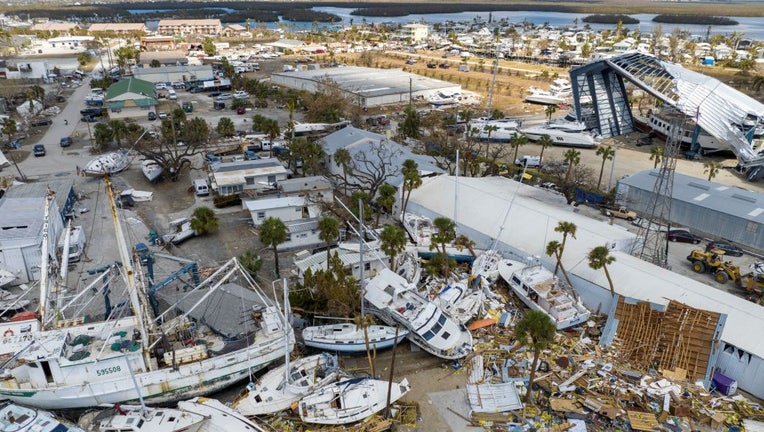 The death toll from Hurricane Ian is climbing as additional fatalities have been reported in Florida, North Carolina, Virginia and Cuba, bringing the total to at least 101 people.

Search and rescue operations continue in the Sunshine State after Hurricane Ian made landfall Wednesday afternoon near Cayo Costa, Florida, as a powerful Category 4 hurricane with winds of 150 mph.

Those destructive winds pushed massive amounts of water from the Gulf of Mexico onshore and caused a catastrophic storm surge that flooded homes and businesses and washed away roads and bridges used to access beachfront locations.

Hurricane Ian continued to spin across the state and plunged millions of utility customers into darkness as the storm's fury brought down trees and power lines across the region.

A family is evacuated from their home near Kissimmee, Florida, by the National Guard on Oct. 1, 2022. (Katie Byrne)

Once Ian moved offshore on Thursday, the storm made its way north and eventually made its final landfall along the South Carolina coast as a Category 1 hurricane with winds of 85 mph.

As of Tuesday, nearly five dozen deaths have been reported in Florida as crews continue searching damaged and destroyed homes for additional victims.

WHEN WILL POWER BE TURNED BACK ON? RESTORATION FROM HURRICANE IAN COULD TAKE MONTHS

As of Tuesday, 92 deaths caused by Hurricane Ian had been confirmed. The majority of those deaths have been reported in hard-hit Lee County, and officials said dozens of victims drowned.

"That was the last official count that we have," FDFLE Commissioner Mark Glass said. "They're working feverishly. So, you have to give them time because it takes time to go through things."

Below is a list of storm-related deaths by county:

Several state and local officials have said they are investigating additional deaths that may be related to Hurricane Ian, and those were described as "unconfirmed fatalities" by Florida Division of Emergency Management Director Kevin Guthrie on Friday.

"There is a potential for significant fatalities, but I think it's too soon to put any type of numbers on that," Florida Gov. Ron DeSantis told FOX News last week.

At least five deaths related to Hurricane Ian have been reported in North Carolina as of Wednesday.

Three of those fatalities were reported in Johnston County, and the fourth was reported in Martin County.

"Although we mourn five deaths and incurred some damage, it’s clear North Carolina missed the worst of this storm," Governor Roy Cooper said in a statement. "Now that some of our emergency resources are no longer needed at home, we are sending additional assistance to our Florida neighbors, who have a long road of recovery ahead."

Officials said two of the deaths were due to storm-related vehicle crashes.

And the Associated Press reported the deaths included a man who drowned when his truck crashed into a swamp and another who was killed by carbon monoxide poisoning from the improper use of a generator.

Virginia State Police report 19-year-old Dylan B. Covington was driving outside of Lynchburg, Virginia, on Friday evening when the combination of gusty winds and heavy rainfall toppled a tree onto his car.

Troopers reported the driver was wearing his seatbelt but died at the scene.

During the investigation, a second tree fell while police were on scene but no one was injured by the second tree.

The death toll from Hurricane Ian stands at three in Cuba, according to a report from the United Nations.

Damage assessments are still underway across the island nation, but an initial survey said more than 100,000 homes had been damaged or destroyed by the powerful hurricane.

In addition to damaged infrastructure, the UN reports that the storm's effects severely affected agriculture and crop production.