Hurricane Ian continues to strengthen in the Caribbean Sea on Monday, and the FOX Forecast Center expects the storm to rapidly intensify into a major hurricane by Monday night or early Tuesday as it approaches western Cuba. A Hurricane Warning has been issued for parts of Florida's Gulf Coast, including the Tampa Bay area, ahead of the expected wind, rain and storm surge from Hurricane Ian later this week.

Florida Gov. Ron DeSantis urged Floridians to take precautions and declared a state of emergency for all 67 counties ahead of the impacts of Hurricane Ian, which could reach Category 4 intensity by later Tuesday in the southeastern Gulf of Mexico.

Hurricane Ian updates: DeSantis issues state of emergency for all of Florida

Florida Gov. Ron DeSantis provided updates on preparations for Hurricane Ian arriving on the west coast of the sunshine state in the coming days. The tropical storm turned hurricane is currently on a path for the gulf, with evacuation orders issued for parts of Hillsborough County in Tampa.

Some mandatory evacuations were ordered Monday in the Tampa Bay area.

MANDATORY EVACUATIONS ORDERED FOR OVER 300,000 IN TAMPA BAY AS HURRICANE IAN CHURNS CLOSER TO FLORIDA 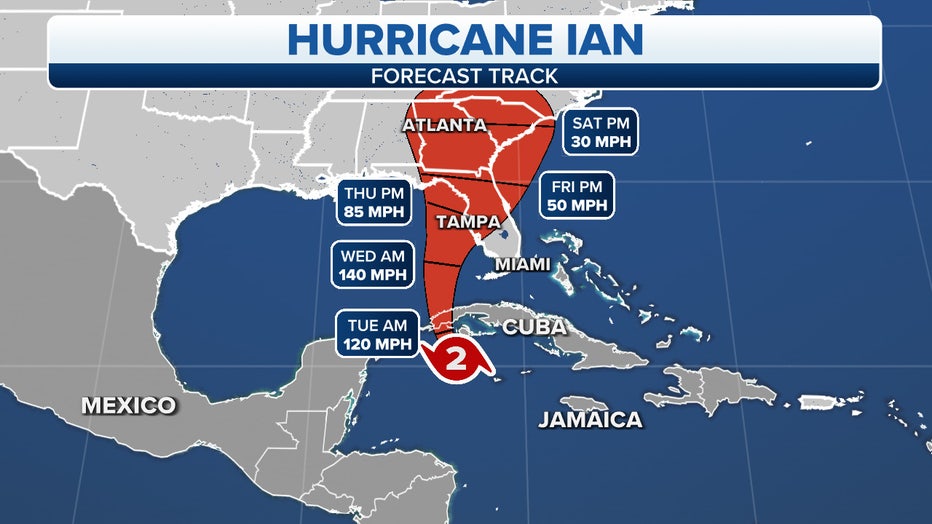 The projected path and intensity of Hurricane Ian. ( )

Here's everything the FOX Forecast Center knows about this significant hurricane threat to Florida and the southeastern U.S. later this week.

Where is Hurricane Ian?

As of late Monday afternoon, Hurricane Ian was centered about 155 miles southeast of the western tip of Cuba.

Ian was moving northwestward with maximum sustained winds of 100 mph, making it a Category 2 hurricane on the Saffir-Simpson Hurricane Wind Scale.

Hurricane Ian's outer rainbands have been lashing Grand Cayman on Monday. Wind gusts as high as 53 mph were reported on this largest island of the Caymans.

KNOW YOUR ZONE: FLORIDA EVACUATION MAP SHOWS WHO WILL HAVE TO LEAVE BEFORE A HURRICANE STRIKES 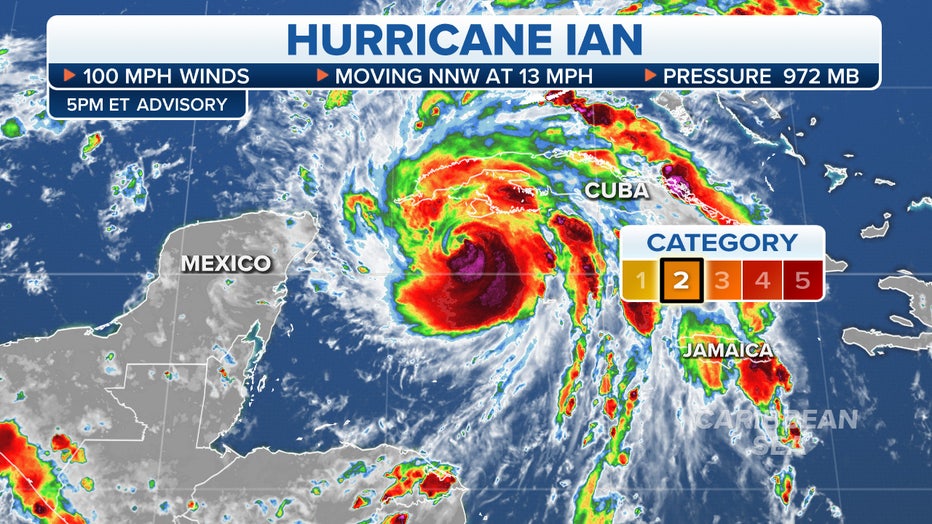 Where are watches and warnings in effect?

A Hurricane Watch has been issued in Florida from north of Anclote River to the Suwannee River and from Bonita Beach to Englewood. A Hurricane Watch means that sustained winds of at least 74 mph are possible in the watch area. A watch is typically issued 48 hours before the anticipated first occurrence of tropical-storm-force winds (39-plus mph), conditions that make outside preparations difficult or dangerous.

A Tropical Storm Watch has been issued in Florida from the Florida Keys from Seven Mile Bridge to Channel 5 Bridge, Lake Okeechobee, north of the Suwannee River to Indian Pass and Jupiter Inlet to Altamaha Sound. A Tropical Storm Watch means that sustained winds of at least 39 mph are possible in the watch area, generally within 48 hours. 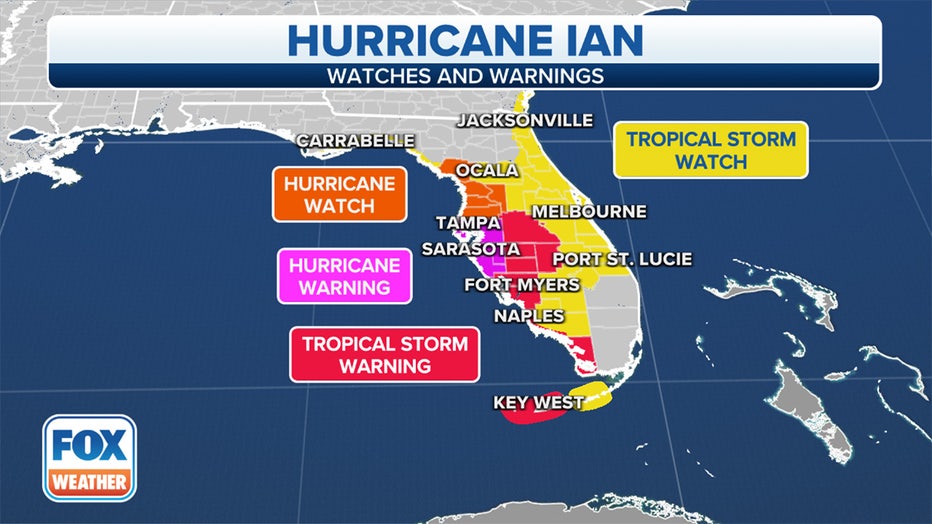 A Storm Surge Warning has been issued for Tampa Bay and from Anclote River southward to Flamingo. A Storm Surge Warning means there is a danger of life-threatening inundation, from rising water moving inland from the coastline, during the next 36 hours in the indicated locations.

A Storm Surge Watch has been issued for the Florida Keys from the Card Sound Bridge west to Key West, the Dry Tortugas, Florida Bay, Aucilla River to Anclote River, Altamaha Sound to Flagler/Volusia County Line and Saint Johns River. A Storm Surge Watch means there is a possibility of life-threatening inundation, from rising water moving inland from the coastline, in the indicated locations during the next 48 hours. 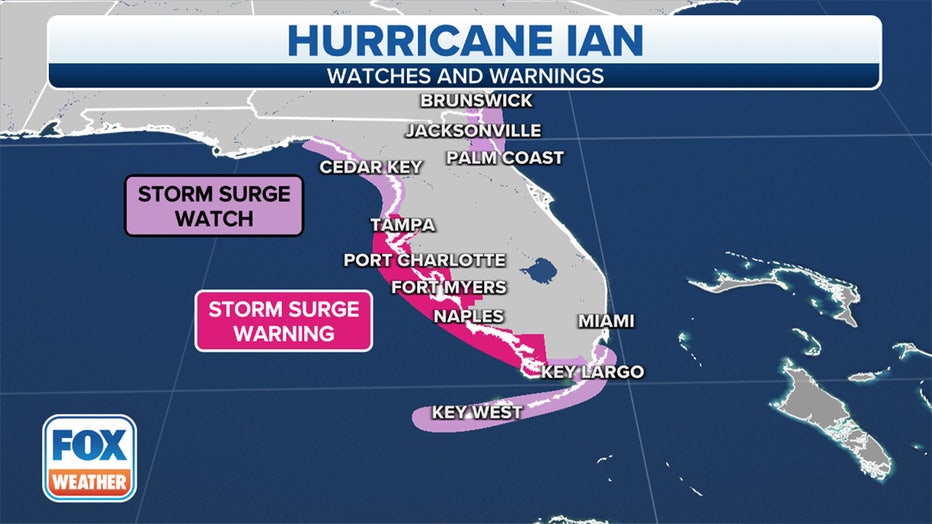 Storm Surge Watches are in effect along the Gulf Coast of Florida and in the Florida Keys. (FOX Weather)

In the Caribbean, a Hurricane Warning is in effect for the Cuban provinces of Isla de Juventud, Pinar del Rio and Artemisa.

A Tropical Storm Warning has been issued for the Cuban provinces of La Habana, Mayabeque and Matanzas. 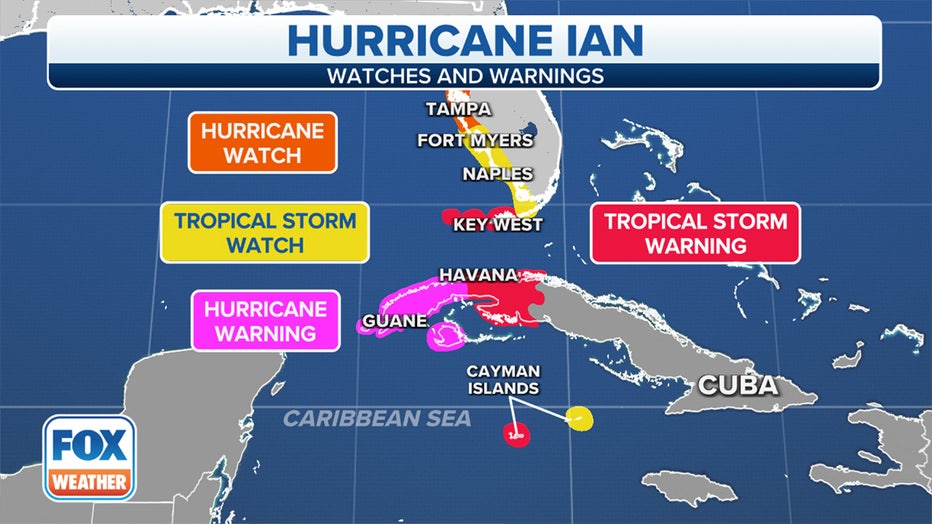 What is the forecast for Hurricane Ian?

Hurricane Ian will spread bands of heavy rain and high winds across the Cayman Islands on Monday, track toward western Cuba Monday night and early Tuesday, then emerge over the southeastern Gulf of Mexico on Tuesday.

Ian is forecast to pass to the west of the Florida Keys late Tuesday before approaching the Gulf Coast of Florida from Wednesday into Thursday.

The FOX Forecast Center expects Ian to rapidly intensify into a major hurricane (Category 3 or stronger) by Monday night or early Tuesday as it approaches western Cuba. Rapid intensification occurs when a tropical cyclone's (tropical depression, tropical storm or hurricane) maximum sustained winds increase by at least 35 mph in a 24-hour period, according to the National Hurricane Center.

As it moves away from western Cuba by later Tuesday, Hurricane Ian is predicted to reach as high as Category 4 intensity in the southeastern Gulf of Mexico. 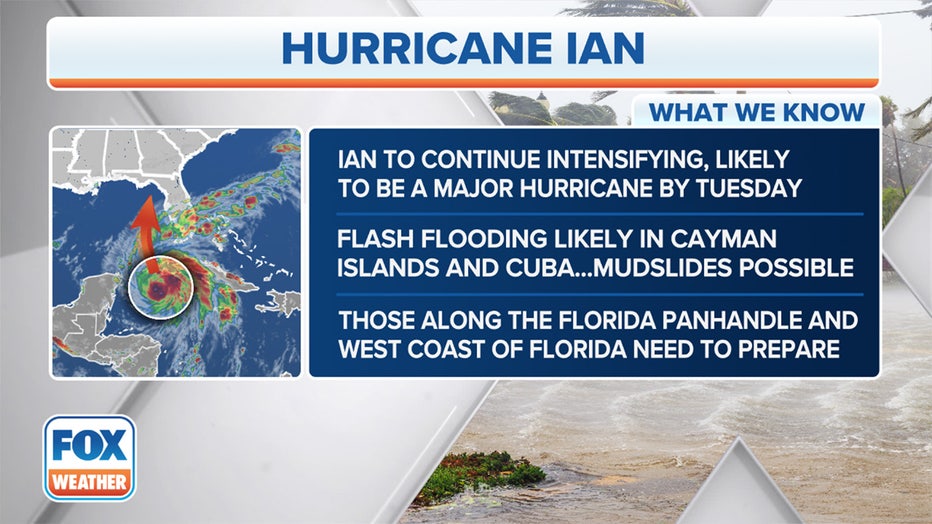 Here's what we know about Hurricane Ian. (FOX Weather)

The FOX Forecast Center noted that some uncertainty remains in the forecast for Hurricane Ian's track as it approaches Florida later this week.

Computer forecast models indicate Ian could make landfall anywhere from the eastern Florida Panhandle to the west coast of the Florida Peninsula.

An eastern track could bring Hurricane Ian ashore along Florida's west coast as early as Wednesday night, but a more northern track means Ian might not make landfall until Thursday night or Friday morning in the Florida Big Bend or eastern Panhandle.

Even if Hurricane Ian never makes landfall along the Florida Peninsula, the west coast of the state could still get scraped by the eastern side of Ian's circulation.

The hurricane is also forecast to slow down in forward progress as it gets closer to landfall, which would make the wind, rain and storm surge impacts persist for a longer period of time.

"I'm really concerned that people won’t take the threat seriously, especially for places like Tampa, Naples and Fort Myers. They are looking at the cone or the track, and it looks like it's offshore or west of them, and they are probably downplaying the impact," said Jamie Rhone, the acting director of the National Hurricane Center. "But what I want to stress to those people is that it really doesn't take a ton of wind in this part of the country to push water onto the coast. And we could be looking at a decent storm surge event even if the track is offshore."

HERE ARE THE BUZZWORDS YOU'LL BE HEARING DURING HURRICANE SEASON 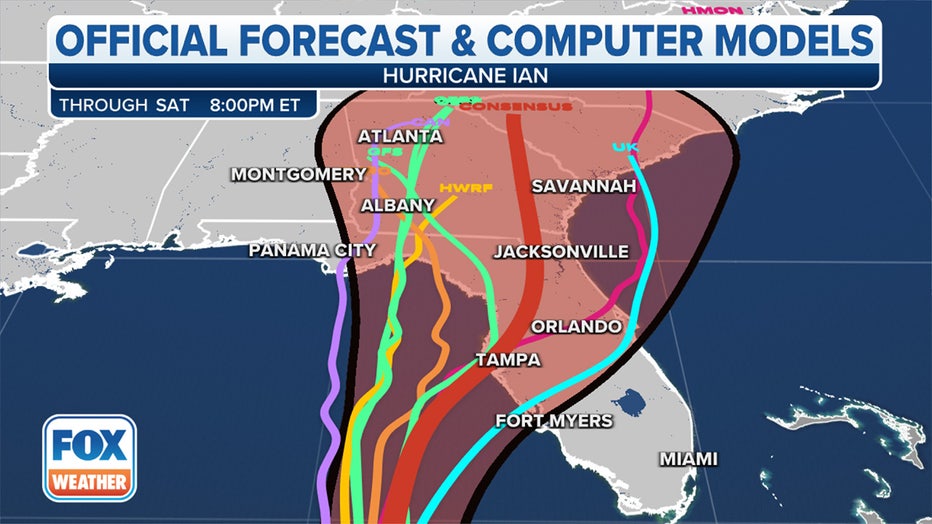 A combination of deep, warm waters and relaxed wind shear – winds that change direction and speed at various heights – in the western Caribbean Sea and southeastern Gulf of Mexico is expected to allow Ian to rapidly intensify into a major hurricane, either by the time it approaches western Cuba on Monday night or when it emerges over the southeastern Gulf of Mexico on Tuesday.

The FOX Forecast Center noted that the Loop Current, a current of very warm water flowing northward from the western Caribbean Sea into the southern Gulf of Mexico, could also provide a boost to Ian's intensification rate, as it has long been known to be a significant source of fuel for strong Gulf of Mexico hurricanes.

WHAT IS WIND SHEAR? 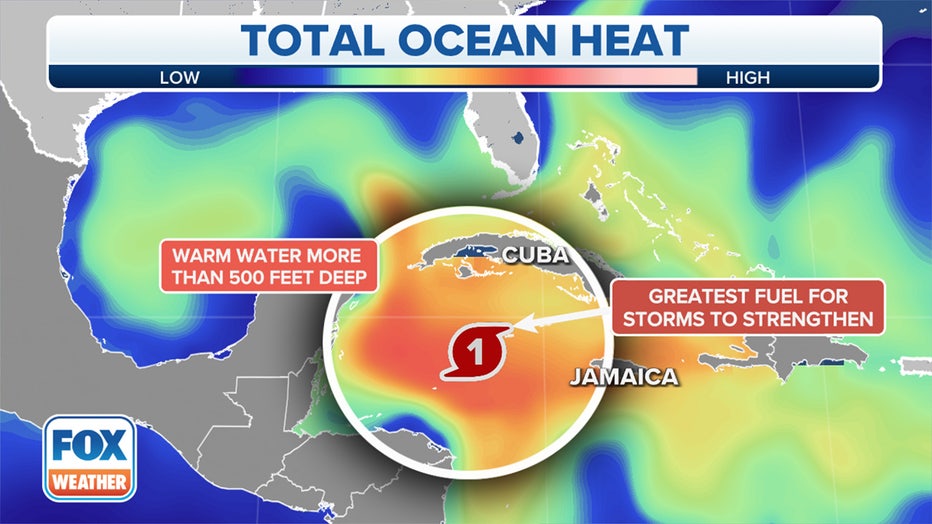 Later this week, wind shear is expected to increase as Ian heads northward through the eastern Gulf of Mexico, and that will likely cause the hurricane to weaken in intensity as it approaches landfall in Florida.

Due to Hurricane Ian's large size, impacts are likely to occur outside the forecast cone of uncertainty, and these impacts could arrive before the center of the hurricane makes landfall.

"People are just so fixated on two things, the Saffir-Simpson intensities – the number – and the track. And when a storm like this gets big, it is going to spread impacts and push water and produce rain and winds in places that’s going to catch people off guard," Rhone told FOX Weather. "So I really want everyone on the Florida Peninsula to really be paying attention and thinking about the hazards, and not the Saffir-Simpson Scale and not the skinny black line in the middle of the cone."

WHAT IS THE ‘CONE OF UNCERTAINTY’ IN HURRICANE FORECASTS? 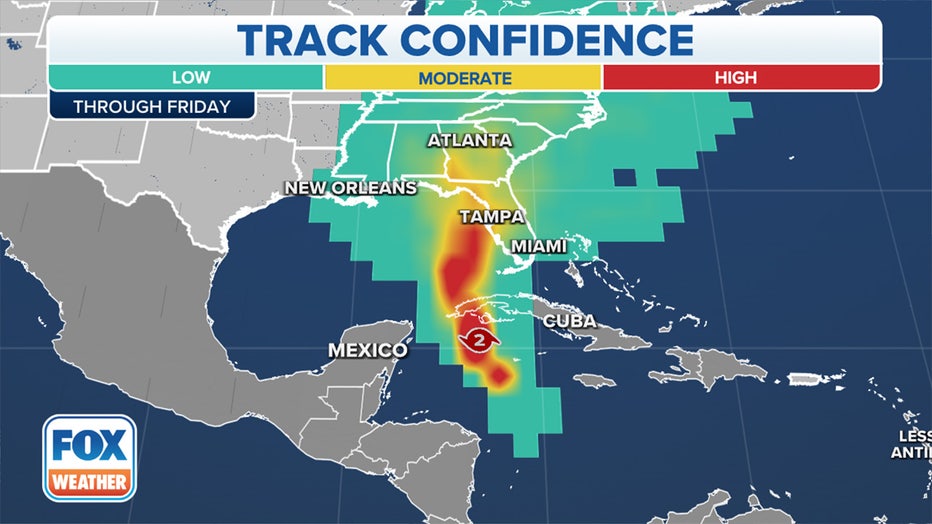 What are the expected impacts of Hurricane Ian in the Cayman Islands and Cuba?

Hurricane-force winds are expected to spread into the Hurricane Warning areas in western Cuba by Monday night. Destructive winds are possible where the core of Ian moves across western Cuba.

Tropical-storm-force winds (39-plus mph) are expected in the Tropical Storm Warning areas in Cuba by late Monday and into Tuesday.

High rainfall totals are forecast for western Cuba, where 6 to 10 inches is expected, with localized totals up to 16 inches possible. This heavy rain could produce flash flooding and mudslides in hilly and mountainous areas of western Cuba.

What are the expected impacts of Hurricane Ian in Florida and the southeastern US?

Hurricane-force winds (74-plus mph) are possible along the Gulf Coast of Florida in the Hurricane Watch areas on Wednesday, with tropical-storm-force winds possibly beginning as soon as Tuesday night.

"Anticipate, particularly the closer you are to where the eye of the storm makes landfall, anticipate power outages," DeSantis said. "That is something that will likely happen with a hurricane of this magnitude."

TRACK HURRICANE IAN WITH THESE MAPS 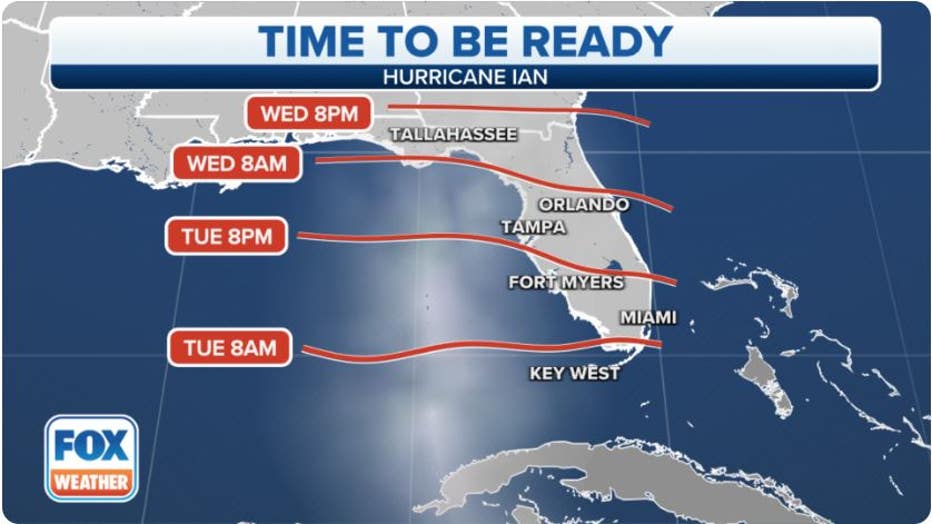 The expected increase in the size of Hurricane Ian and its potential to slow down in forward progress as it approaches Florida will increase the threat of life-threatening storm surge, regardless of the hurricane's intensity at landfall.

According to the National Hurricane Center, the water could reach the following heights above ground somewhere in the indicated areas if the peak surge occurs at the time of high tide:

Storm-surge flooding might begin as soon as late Tuesday in far South Florida, then along the rest of Florida's Gulf Coast by Wednesday. Most of the Gulf Coast of Florida should see peak storm-surge inundation either Thursday or Friday before water levels slowly subside on Saturday.

WHY FLORIDA'S GULF COAST IS SUSCEPTIBLE TO A HURRICANE'S STORM SURGE 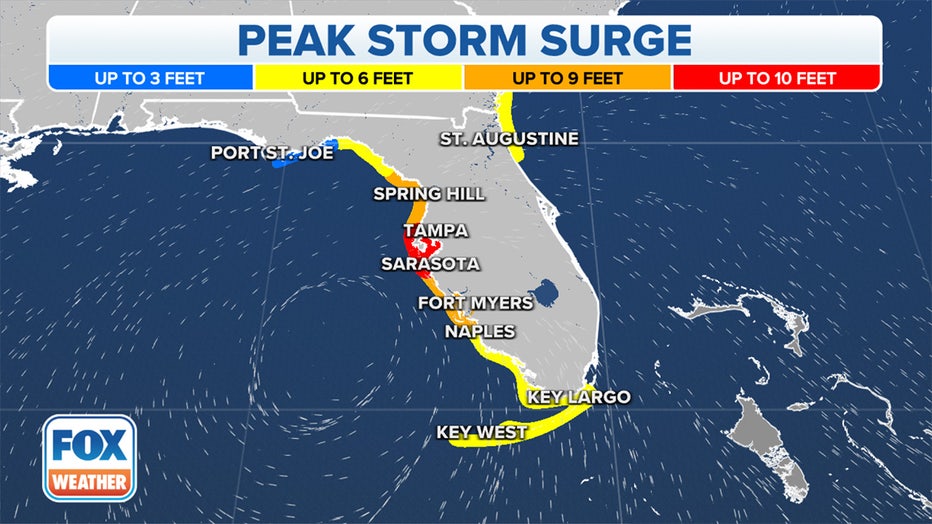 Bands of locally heavy rain were already beginning to spread into portions of Florida on Monday. This heavier rain will gradually spread northward through the Florida Peninsula in the days ahead and eventually into the Florida Panhandle and parts of the Southeast by late week.

Limited flooding impacts and rises on area streams and rivers are then possible over North Florida, the Florida Panhandle and portions of the Southeast mid- to late week.

HOW TO PREPARE FOR A HURRICANE 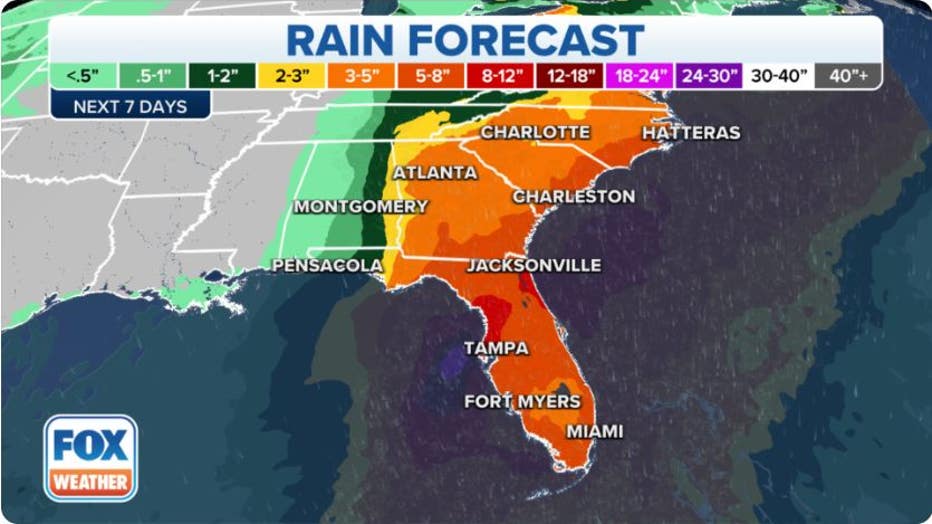 According to the FOX Forecast Center, Ian will move inland over the southeastern U.S. following its Florida landfall. Heavy rain, gusty winds and isolated tornadoes are possible across parts of the Southeast from late Friday into the weekend.

Florida's emergency management agency is advising residents to prepare for the coming storm now. Floridians can check their evacuation zone by typing their address into an interactive map.

The FOX Forecast Center will be keeping a close eye on Hurricane Ian as it strengthens and tracks in the direction of Florida this week.

Get updates to this story from FOXWeather.com.