Johnny Depp trial: Hear the verdicts being read in court

Hear the moment the jury returned with verdicts in the Johnny Depp vs. Amber Heard civil trial

A jury has ruled in favor of both Johnny Depp and Amber Heard in Depp's libel lawsuit against his ex-wife, but the "Pirates of the Caribbean" actor wasn't in the courtroom when the verdict was read.

Depp, 58, sued Heard for libel in Fairfax County Circuit Court over an op-ed she wrote for the Washington Post in 2018. Heard filed a $100 million counterclaim against Depp after his former lawyer, Adam Waldman, called her claims of abuse a hoax.

Throughout the six-week-long trial, jurors heard from both Depp and Heard extensively. Each was on the stand initially for four days, undergoing grueling cross-examinations, with Depp taking the stand one final time as a rebuttal witness.

Their testimony provided an ugly glimpse into the couple's seemingly toxic relationship and captivated the internet with daily livestreams that garnered millions of views. Some fans even camped out, spending tens of thousands of dollars for a chance to witness the court proceedings in person. 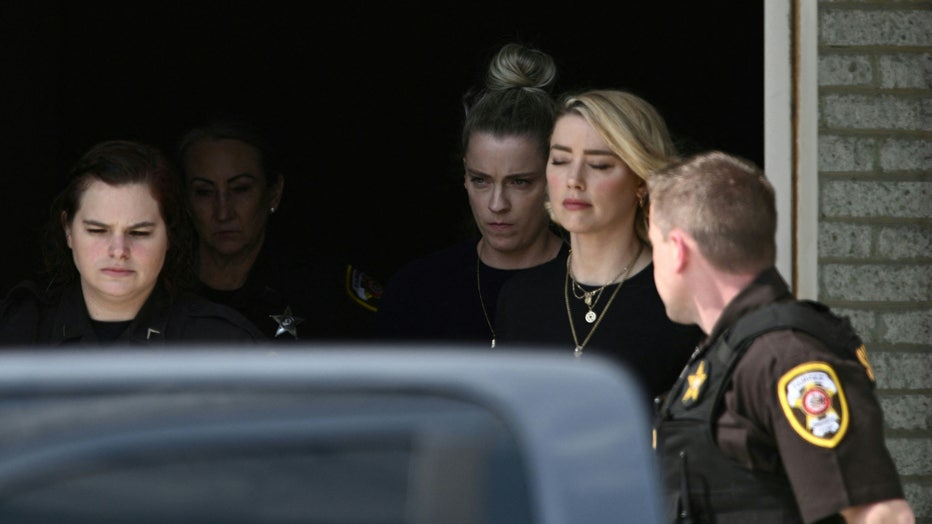 But after the case went to the seven-person civil jury, Depp didn’t wait in Virginia for the decision. Instead, he's spent the last few days on stage, singing and playing guitar with Jeff Beck in the United Kingdom.

A source close to Depp told FOX News that he would remain in the U.K. for the verdict due to previously scheduled work commitments made prior to the trial. 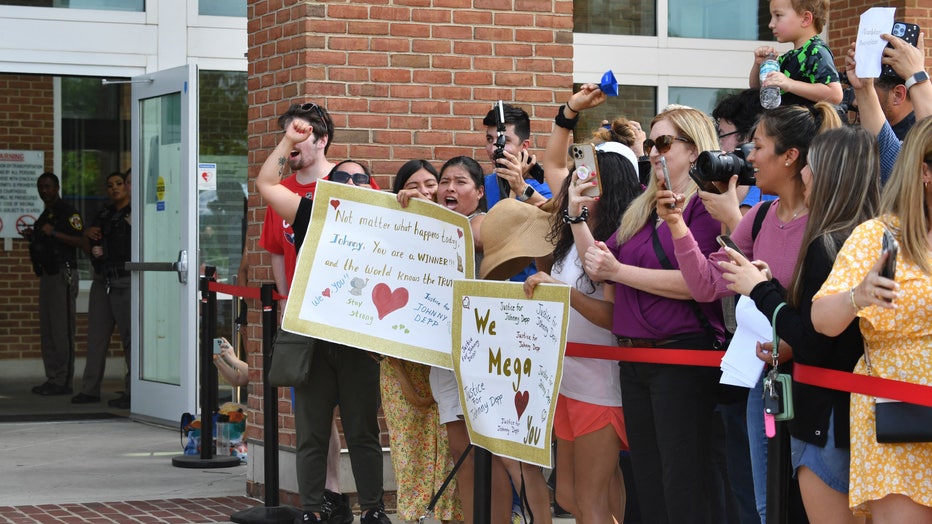 Fans gather outside the Fairfax County Circuit Courthouse in Fairfax, Virginia, on June 1, 2022, after a verdict was reached in the Depp v. Heard defamation trial. (Photo by NICHOLAS KAMM/AFP via Getty Images)

Heard said in a statement that her disappointment is "beyond words."

"I’m heartbroken that the mountain of evidence still was not enough to stand up to the disproportionate power, influence, and sway of my ex-husband," she said.

"I’m even more disappointed with what this verdict means for other women," she continued. "It is a setback. It sets back the clock to a time when a woman who spoke up and spoke out could be publicly shamed and humiliated. It sets back the idea that violence against women is to be taken seriously.

"I believe Johnny’s attorneys succeeded in getting the jury to overlook the key issue of Freedom of Speech and ignore evidence that was so conclusive that we won in the UK," Heard said. "I’m sad I lost this case. But I am sadder still that I seem to have lost a right I thought I had as an American – to speak freely and openly."

Depp released his own statement on Instagram, saying in part that the verdict "gave me my life back" and that he is "truly humbled."

"From the beginning, the goal of bringing this case was to reveal the truth, regardless of the outcome," he continued. "Speaking the truth was something that I owed to my children and to all those who have remained steadfast in their support of me. I feel at peace knowing I have finally accomplished that."

Depp, 58, sued Heard for libel in Fairfax County Circuit Court over an op-ed she wrote for the Washington Post in 2018. The piece was headlined: "I spoke up against sexual violence — and faced our culture’s wrath. That has to change." In the piece, she referenced herself as "a public figure representing domestic abuse."

Heard never mentioned Depp by name, but Depp’s lawyers argue her writing was a clear reference to abuse accusations Heard made when she sought a 2016 restraining order against him.

Depp has denied he ever struck Heard and says she was the abuser in the relationship. Heard has testified about more than a dozen separate instances of physical abuse she says she suffered at Depp’s hands.

Depp said his movie career suffered after the op-ed was published and that the accusations and the article made him a Hollywood outcast and cost him his role in the lucrative "Pirates of the Caribbean" movie franchise. 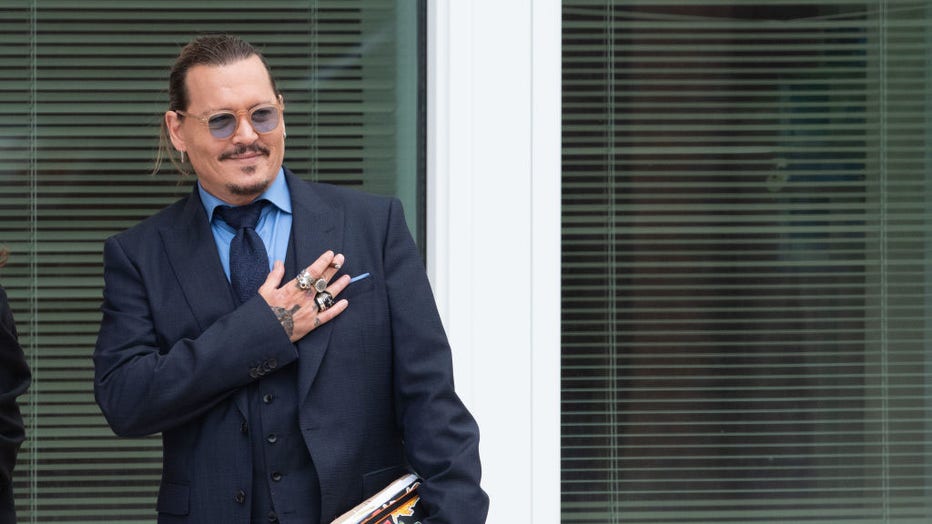 FAIRFAX, VA - MAY 27: Johnny Depp gestures to fans during a recess outside court during the Johnny Depp and Amber Heard civil trial at Fairfax County Circuit Court on May 27, 2022, in Fairfax, Virginia. (Photo by Cliff Owen/Consolidated News Pictures

Heard’s lawyers have argued that Heard’s opinion piece was accurate and didn't defame him. They've said Depp’s career downfall and ruined reputation was due to his own bad behavior and have argued that The Walt Disney Co. had already decided to ax Depp from "Pirates of the Caribbean" months before the article’s publication.

Additionally, Heard filed the $100 million counterclaim against Depp after his former lawyer, Adam Waldman, called her claims of abuse a hoax. Heard's lawyers have said Waldman made those statements in league with Depp, something Depp denies.

The two met in 2009 while filming "The Rum Diary." Despite their 22-year age difference, Heard testified there was an instant connection when Depp met with her as he considered her for a role in the film.

"I was a no-name actor. I was 22. He was twice my age. He’s this world-famous actor and here we are getting along about obscure books, old blues" music, testified Heard, who’s now 36.

While they had chemistry during the filming of the movie, she said they didn’t begin dating until doing a press tour for the film’s release in 2011. At the outset, they kept their relationship a secret.

Heard testified that the first act of physical abuse against her by Depp happened in 2013.

The two married in February 2015 reportedly at their Los Angeles home, but the nuptials didn’t last long. In May 2016, Heard filed for divorce and obtained a temporary restraining order against Depp. Their divorce was finalized in early 2017, with Heard saying she was going to donate her $7 million settlement to charity.

Heard’s op-ed was published in The Washington Post in 2018. In 2019, Depp filed a $50-million defamation lawsuit against her. Heard countersued Depp for $100 million.

Actress Amber Heard winks at her attorney, Elaine Bredehoft, left, as her trial with ex-husband actor Johnny Depp breaks for lunch at the Fairfax County Circuit Courthouse in Fairfax, Virginia, on April 18, 2022. (Photo by STEVE HELBER/POOL/AFP via Getty Images)

Why did the Depp-Heard trial happen in Virginia?

Heard’s lawyers had sought to have the case tried in California, where the actors reside. But a judge ruled that Depp was within his rights to bring the case in Virginia because The Washington Post’s computer servers for its online edition are located in the county.

Depp’s lawyers said they brought the case in Virginia in part because the laws there are more favorable to their case.

The Associated Press and Megan Ziegler contributed to this report.