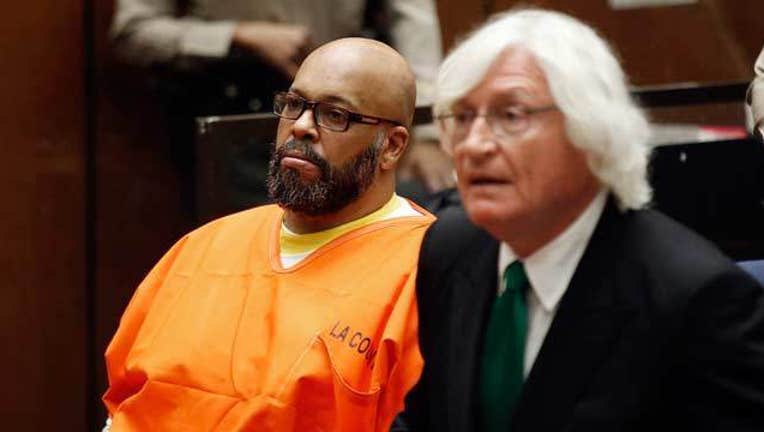 LOS ANGELES (AP) -- A California judge on Thursday said the murder trial of former rap mogul Marion "Suge" Knight will begin in January without any further delays, a move that was welcomed by Knight.

The Death Row Records co-founder has changed attorneys several times since he was arrested in early 2015 after he ran over two men outside a Compton burger stand, killing one.

His Death Row label fueled gangster rap's popularity in the 1990s, with a roster of artists that included Dr. Dre, Tupac Shakur and Snoop Dogg. He lost control of the company after it was forced into bankruptcy.

Superior Court Judge Ronald Coen told Knight the timeframe of his trial was set "in stone" and it would begin within 10 days of Jan. 8.

"I want to get back to my family," Knight said during the hearing in Los Angeles after complaining about his lack of access to legal experts to help his defense.

Knight has pleaded not guilty to murder and attempted murder charges and his lawyers have said he was fleeing armed attackers when he struck the men. Businessman Terry Carter was killed and Cle "Bone" Sloan was seriously injured. Knight could face life in prison if convicted.

Carter's daughter Nekaya Carter said her family is glad that a trial date has finally been set.

"It's far away but it's a step," she said after the hearing.

Coen said the trial was expected to last a month and he ordered court officials to provide 200 potential jurors who could serve on a case that long.

Knight, 51, was recently hospitalized for complications from blood clots that formed after he was shot in 2014. He said Thursday that he was feeling much better.

Knight pleaded no contest in 1995 and was sentenced to five years' probation for assaulting two rappers in 1992. He was sentenced to prison in 1997 for violating his probation by taking part in a fight at a Las Vegas hotel hours before Shakur was fatally wounded in a drive-by shooting as he rode in Knight's car.