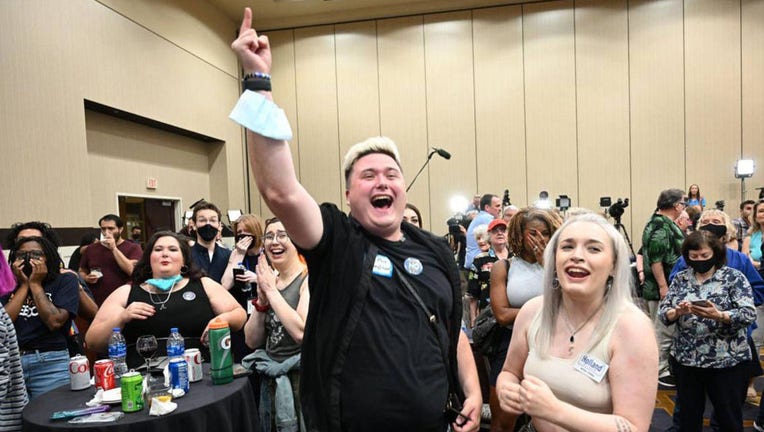 TOPEKA, Kan. - An increase in turnout among Democrats and independents and a notable shift in Republican-leaning counties contributed to the overwhelming support of abortion rights last week in traditionally conservative Kansas, according to a detailed Associated Press analysis of the voting results.

A proposed state constitutional amendment would have allowed the Republican-controlled Legislature to tighten restrictions or ban abortions outright. But Kansas voters rejected the measure by nearly 20 percentage points, almost a mirror of Republican Donald Trump's statewide margin over Democrat Joe Biden in the 2020 presidential election.

In the aftermath of the U.S. Supreme Court's decision to repeal a woman's constitutional right to an abortion, the threat of new restrictions in the state galvanized Democrats and independents more than anticipated. At the same time, Republicans showed less interest in turning out to support the measure.

The findings reinforce a sense in both parties that the Supreme Court's decision may have altered the dynamics of this year's midterm elections. Here's how it played out:

In 2020, Trump carried Kansas by 18 points. Last week, not a single county in the state favored the ballot measure as much as it had supported the former president, the AP found.

And in 14 Kansas counties that Trump won, majorities rejected the amendment.

"The anti-abortion politicians have just overplayed their hand on these bans," said Tamarra Wieder, director for Planned Parenthood Alliance Advocates in Kentucky, where another abortion measure will be on the ballot in November.

The Kansas county with the largest drop from the presidential election to the abortion referendum was Greenwood, in rural southeast Kansas. Trump won nearly 80% of the vote there in 2020, but there was about a 30-point shift on abortion, with voters narrowly favoring "no," the position that leaves abortion rights in place for women in Kansas.

Beyond counties that flipped entirely, dozens of deeply Republican counties saw voters favor the abortion amendment as expected, but by much narrower margins than their preference for Trump two years ago. Near Topeka, for example, 72% of voters in Pottawatomie County backed the former president’s re-election, while just 57% supported the amendment.
Abortion opponents said they were stunned by the margin of the results.

It wasn’t just the amendment’s margin of defeat that jolted the political consciousness. It was also the seam-busting turnout in what otherwise should have been a normal, low-turnout primary in a midterm election year.

The latest AP tallies show that more than 922,000 votes were cast by Kansas voters on the abortion referendum. That’s roughly twice as many voters as turned out for the state’s previous midterm primary election in 2018, and it’s about as many as turn out for Kansas’ midterm general elections in some years. Overall turnout — 48% of registered voters — outpaced the 34% turnout for the 2020 presidential primaries.

The most recent electorate also was considerably less Republican than in a typical Kansas primary. From 2010 through 2020, Republican primary ballots outnumbered non-Republican ballots by about 2-to-1. In last week’s election, according to the Kansas secretary of state’s office, the two groups turned out in nearly equal numbers.

Advocates on both sides of the amendment spent more than $14 million blanketing Kansas with ads and signs, knocking on doors and calling voters, according to state campaign finance reports.

That effort helped attract an unusual variable in Kansas primaries: independent voters. That group is eligible to vote on referenda but not for candidates running in any party primary. But campaign ads emphasized that "no affiliation" voters could indeed vote on the abortion question. It worked: Around 184,000 more votes were cast for the abortion amendment than voted for governor, a likely barometer to measure their portion of the electorate.

"The decision to overturn Roe really was a wake-up call for more moderate voters," said Ashley All, a spokesperson for Kansans for Constitutional Freedom, a group that fought against the ballot measure.

The result from Kansas is rippling into numerous other states.

In Georgia, the membership for NARAL Pro-Choice America jumped from 53,000 to more than 80,000 and could hit 100,000 by the November election, said Alicia Stallworth, the director of NARAL campaigns in the Southeastern U.S.

"I don’t think this is something that disappears," Stallworth said of the current energy among abortion rights advocates.
Abortion-rights advocates said the decision to strike down Roe vs. Wade, the 1973 case that recognized a woman's constitutional right to an abortion, energized many voters who had assumed abortion access was safe.

"It was such a beacon of light in this moment," said Helen Shumaker, director of state abortion access at the National Women’s Law Center, of the Kansas vote. "I think there is energy around ballot measures for the foreseeable future."
In Ohio, Democratic gubernatorial nominee Nan Whaley has called for a statewide ballot question on a state constitutional amendment to protect abortion rights as soon as 2023.

In South Dakota, a group called Dakotans for Health is pushing a similar ballot initiative in 2024. And in Colorado, advocates want a 2024 referendum that could allow public funding for abortion.

But getting measures on ballots without going through a state legislature can be difficult. The Ballot Initiative Strategy Center, which advises liberal groups on initiative campaigns, advises the process could take three years.

In half of the states, including Kansas, only lawmakers can put propositions on the statewide ballot. That means in Texas, which bans most abortions, the only options are to wait for legislators to put an initiative to a vote—as anti-abortion lawmakers did in Kansas — or vote out the incumbents.

"In Texas we know that’s why we’re losing," said Delma Catalina Limones, communications director for Avow, an abortion-rights group in that state.

But despite the apparent confidence of Kansas legislators to put the abortion amendment on the ballot this month, their expectations were upended by the resounding defeat.

Value Them Both Coalition, the main group in Kansas that fought in favor of the amendment, called it a "temporary setback" and promised in a statement that "our dedicated fight to value women and babies is far from over."