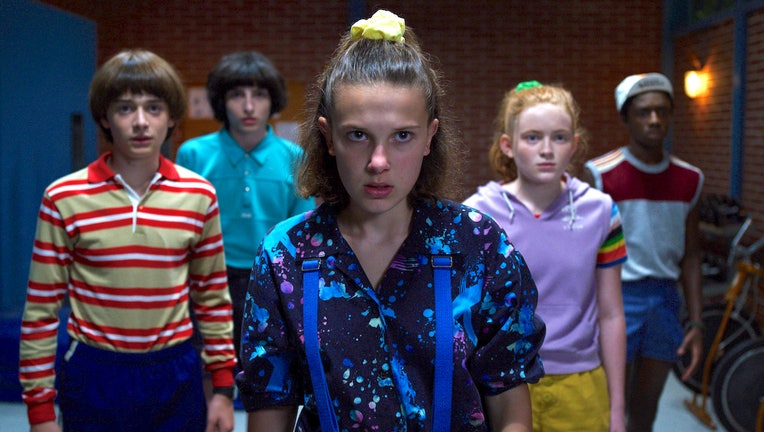 Chicago - It’s been three long years since "Stranger Things" last graced our Netflix screens. And the spooky hit is finally returning with its (supersized!) fourth season, starting this Friday, May 27. If you’re anything like us, however, you might need a little refresher as to what exactly went down in Hawkins, Indiana over the course of the show’s first three seasons.

Thankfully, Netflix has you covered with three recap videos to jog your memory.

The show’s breakout first season introduced us to a haunted alternate dimension known as the Upside Down and a monstrous creature called a Demogorgon — not to mention supporting characters like Mike’s tenacious older sister Nancy (Natalia Dyer), her popular boyfriend Steve Harrington (Joe Keery) and her sweet, ultimately doomed friend Barb (Shannon Purser, who earned an Emmy nomination for her trouble).

After much investigating, a ton of scary government agents and plenty of spooky happenings (not to mention a whole bunch of Eggo Waffles), the first season ends with the Demogorgon destroyed, Eleven missing and Will rescued — although still creepily tethered to the Upside Down.

The show’s second season picks up a year later in 1984. Eleven returns but spends most of the season locked away in a cabin with Hopper, who becomes her overprotective adoptive father. Meanwhile, Californian step-siblings Maxine "Max" Mayfield (Sadie Sink) and Billy Hargrove (Dacre Montgomery) arrive in Hawkins to shake up the show’s middle school and high school worlds, respectively. Plus Joyce gets a sweet, ultimately doomed boyfriend named Bob Newby (Sean Astin).

WATCH FREE ON TUBI: Sean Astin in "The Goonies"

The main thrust of the season centers around Will’s residual connection to the Upside Down, and specifically to a giant evil creature known as the Mind Flayer. As Will’s friends try to help him, Nancy and Jonathan become an item, Steve befriends Dustin and a less-evil Hawkins Lab scientist named Dr. Sam Owens (Paul Reiser) gets added to the fold along with local conspiracy theorist Murray Bauman (Brett Gelman). Oh, and Eleven takes a random trip to Chicago to meet a fellow superpowered teen.

In the end, Eleven reunites with her friends and the whole team works together to banish the Mind Flayer and close the gate to the Upside Down forever — thereby saving Will and getting Hawkins Lab shut down in the process. All seems happy at a winter dance where both Lucas/Max and Mike/Eleven share kisses. But a final shot of the Mind Flayer in the Upside Down ends the season on another ominous note.

Season three is set in the summer of 1985 and takes place largely in and around the newly opened Starcourt Mall. Romance takes center stage as the middle school crew start to grow up (much to Hopper’s chagrin.) And while poor Will feels left out as his friends mature without him, the gang soon has bigger problems to worry about thanks to a classic 1980s bad guy staple: Evil Russian scientists!

Hoping to reopen the portal to the Upside Down, the Russians secretly built a lab underneath the mall. Hopper, Joyce and Murray team up with a sweet (and yes, ultimately doomed) Russian scientist named Alexei (Alec Utgoff); meanwhile, over at the food court ice cream parlor Scoops Ahoy, Steve, Dustin, his co-worker Robin (Maya Hawke) and Lucas’ spunky kid sister Erica (Priah Ferguson) start their own investigation into what exactly is going on.

Plotwise, the main antagonist of the season is Max’s abusive brother Billy, who’s possessed by the Mind Flayer and used as part of the creature’s plan to create an army of possessed Hawkins residents known as "The Flayed." And the whole season naturally climaxes at the mall, where the entire Hawkins crew must work together to defeat the Mind Flayer for good. (And sing the title song from "The NeverEnding Story" in the process.)

In the end, Billy earns his redemption by sacrificing himself to save Max and her friends; Eleven’s powers are drained in battle; and Hopper gives up his own life to destroy the machine that opens the portal to the Upside Down — leaving his potential romantic connection with Joyce unfinished.

After those harrowing losses, season three ends with a bittersweet epilogue as Joyce adopts Eleven (who remains powerless), and decides to move the Byers family out of Hawkins. That means Eleven/Mike and Jonathan/Nancy have to prepare for long distance relationships. (Steve, meanwhile, makes peace with the fact that his crush on Robin won’t be reciprocated after she tells him she’s gay.)

And though the whole gang is still mourning Hopper’s death, a Russian-set post-credits scene with a Demogorgon hints at what the season four trailer has confirmed: Hopper is still alive but captured by the Soviets.

"Stranger Things" creators The Duffer Brothers have already announced that the show will end with a fifth and final season. That means these upcoming episodes will likely set the table for that final run. Season four is actually being released in two volumes this time around. The first seven episodes will premiere on May 27, while the final two feature-length installments will premiere July 1.

What time does Stranger Things season 4 come out on Netflix?

Oh and in case those recaps aren’t enough, the show also released this adorable video of the cast themselves trying to summarize all three seasons in just eight minutes.