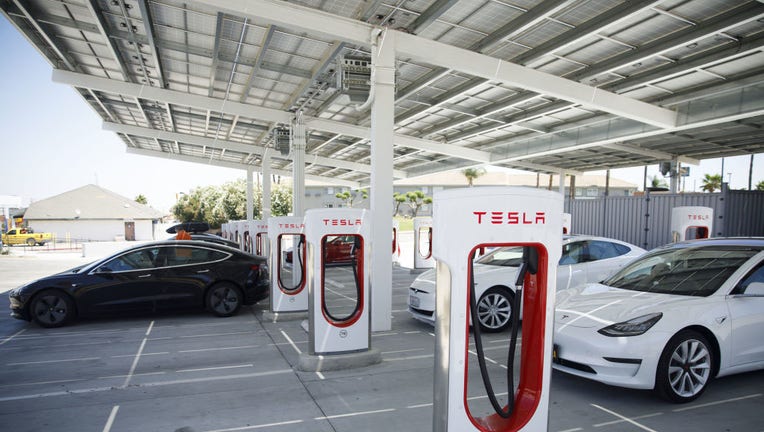 Electric vehicle owners who deal with the hassle of searching for charging stations in their area to recharge their car may get some relief, thanks to Tesla.

The automotive titan is planning to open up its supercharging stations to non-Tesla EVs in the United States later this year, according to a White House fact sheet on June 28.

"Tesla is expanding production capacity of power electronics components that convert alternating current to direct current, charging cabinets, posts and cables," the White House said in a statement. "Later this year, Tesla will begin production of new Supercharger equipment that will enable non-Tesla EV drivers in North America to use Tesla Superchargers."

FOX Television Stations reached out to Tesla Friday for comment on their plans.

Tesla has more than 35,000 supercharging stations worldwide and launched a similar supercharging program for non-EVs in Europe last year.

ScrapeHero, a data gathering company, reports that as of last month, Tesla has approximately 1,407 Supercharger stations in the U.S. California (287), Florida (102), and Texas (78) are the top states with the most stations.

The number of publicly accessible charging stations reached more than 41,000 in 2021, offering more than 100,000 places to charge EV’s, according to the Department of Energy’s Alternative Fueling Station Locator.

How would non-Tesla owners use the Superchargers?

Tesla uses a "proprietary connector" meaning a charging cord that’s only compatible with their cars. Non-Tesla EV owners would need an adapter to use the Supercharger.

While Tesla owners can use the Superchargers normally, non-Tesla owners would have to download the company’s app on their phone and select the "Charge Your Non-Tesla" option to find an available Supercharger port in their area, per a report from The Verge.

Last year, the Biden administration released a plan to build 500,000 charging stations for electric vehicles across the country and bring down the cost of electric cars with the goal of transforming the U.S. auto industry.

The $1 trillion infrastructure law President Joe Biden signed last month authorizes a nationwide network of charging stations and sets aside $5 billion for states to build them, including $63 million for Maryland. The law also provides an additional $2.5 billion for local grants to support charging stations in rural areas and in disadvantaged communities.

Biden’s $2 trillion social and environmental policy bill, now pending in the Senate, includes a $7,500 tax credit to lower the cost of electric vehicles.

The effort also is intended to help the U.S. leapfrog China in the plug-in EV market. Currently, the U.S. market share of plug-in electric vehicle sales is one-third the size of the Chinese EV market. Biden has set a goal that electric cars and trucks account for half of new vehicles sold by 2030.

The LMC Automotive consulting firm expects U.S. sales of new fully electric vehicles to grow more than 730,000 this year and over 2 million by 2025.

FOX 29 Philadelphia and the Associated Press contributed to this story. This story was reported from Washington, D.C.