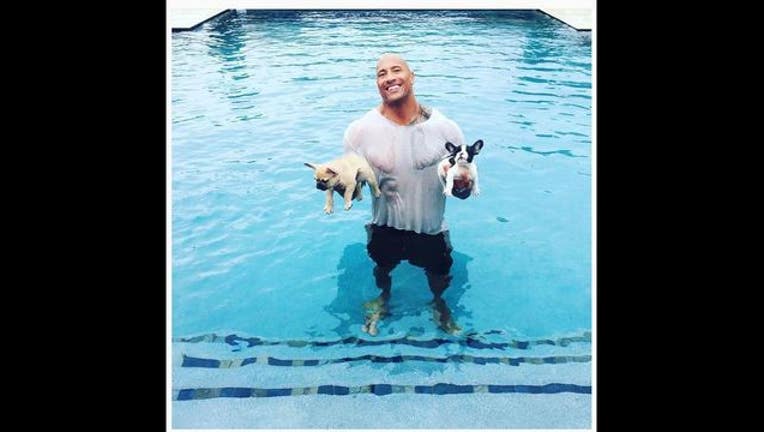 Dwayne 'The Rock' Johnson is known for playing the hero in big time Hollywood action movies, but this past Labor Day weekend he was a real-life hero to two little puppies that almost drowned.

According to a post on The Rock's Instagram account, he and his family had just adopted two young French bulldogs, Hobbs and Brutus, but when he brought "them home and immediately take them outside so they can start learning how to "handle their business and potty like big boys" things went down hill.

According to Johnson "I set them both down and they both take off in a full sprint and fall right into the deep end of our pool. HOBBS (the black and white one) immediately starts doggy paddling while BRUTUS (like a brick) sink heads first to the bottom of the pool."

"I take off into a full sprint, fully clothed, dive in the pool, swim to the bottom, rescue my brick, I mean BRUTUS and bring him back to the edge of the pool. He was a little delirious.. took a moment, threw up all the water he swallowed and looked up at me as if to say, "Thank God you didn't have to give me mouth to mouth!" and then ran off to play with his brother."

And just like that The Rock has once again captured our heart as being not only willing to save the world and a damsel in distress but also two young pups in need of floaties. However Johnson says with his heroic actions come a few words of wisdom.

"A few lessons I've learned today
A) Not all puppies have the instinct to doggie paddle.
B) Some puppies (like BRUTUS) will be so in shock by experiencing water they will sink extremely fast so react quick.
C) While spiriting to save your puppies life, before you dive in, try and throw your cell phone to safety. Don't keep it in your pocket... like I did.