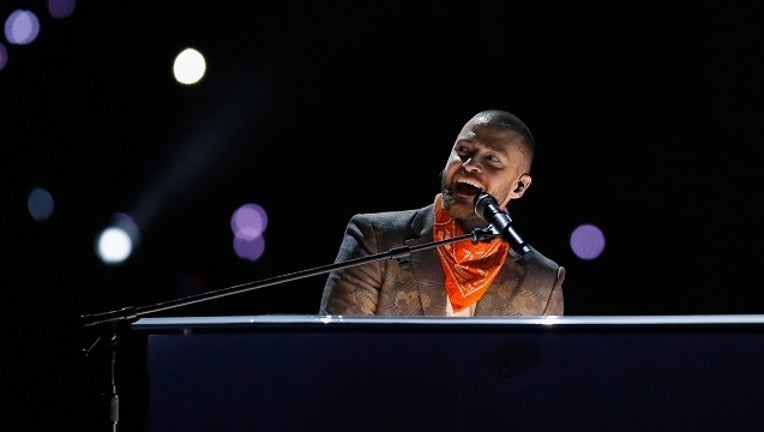 MINNEAPOLIS (AP) - Justin Timberlake's has paid tribute to Prince during his Super Bowl halftime performance with a cover of "I Will Die 4 U."

The singer's set started out in an underground portion of U.S. Bank Stadium made to look like a club filled with lasers and dancers. Timberlake emerged from into the stadium and performed a dance-filled set that included "Sexyback" and "Cry Me A River."

Timberlake danced atop the NFL logo and then with a marching band for "Suit & Tie."

The singer kept on his feet before taking a seat at a white piano to perform "I Will Die 4 U" with footage of Prince projected onto a long screen in the middle of the stadium.

Before the game, there were rumors that Timberlake would use a hologram of Prince during his performance, drawing criticism from fans and those who knew the late superstar.

Nick Foles caught a 1-yard touchdown pass from tight end Trey Burton on a fourth-down trick play, and the Philadelphia Eagles have a 22-12 halftime lead over the New England Patriots in the Super Bowl.

The Foles score came after Tom Brady dropped an over-the-shoulder catch on a trick play for New England on an earlier drive that ended in a failed fourth-down play.

With 34 seconds left in the half, Foles lined up at quarterback before shifting behind the right side of the offensive line as Corey Clement took the snap. Foles paused at the line of scrimmage before running to the end zone as Burton took a reverse pitch from Clement. Burton was recruited as a quarterback at Florida.

Foles and Tennessee's Marcus Mariota are the only quarterbacks to throw and catch a touchdown in the playoffs since at least 1950.

The Eagles answered a 26-yard scoring run by James White that pulled the Patriots within three. Stephen Gostowski missed the PAT kick. Earlier, the Eagles' Jake Elliott missed and the Eagles failed on a 2-point conversion.

White, who had three touchdowns and a 2-point conversion in last year's Super Bowl win over Atlanta, has 26 career points in the Super Bowl. That's fourth all time behind Jerry Rice (48), Adam Vinatieri (34) and Emmitt Smith (30).

New England Patriots wide receiver Brandin Cooks is out for the rest of the Super Bowl with a concussion.

Cooks was wide open early in the second quarter underneath the Philadelphia zone, when he caught Tom Brady's pass, pivoted and danced back and forth to try to extend the play. He didn't see Eagles safety Michael Jenkins coming, though, and was knocked to the turf with a legal-but-jarring hit by Jenkins.

Cooks was barely moving for several seconds, before sitting up and slowly walking off the field. The Patriots soon announced he was out for the remainder of the game with a head injury.

This leaves Brady without one of his most important targets. Cooks was second on the team during the regular season with 1,082 yards and seven touchdowns, a critical contribution amid the absence of wide receiver Julian Edelman.

The first Super Bowl of Cooks' career was a short but rough one.

He took a jet-sweep handoff in the first quarter and tried to hurdle Eagles safety Rodney McLeod hit him in the groin area and slammed him backward to the turf at the 8-yard line after only a 1-yard gain on third-and-2. Then Patriots kicker Stephen Gronkowski had a 26-yard field goal try bounce off the left upright after a mishandled snap.

Turns out Tom Brady's not quite as good on the other end of a pass, and Philadelphia's lead is growing.

Brady botched an attempted over-the-shoulder catch on a throw from receiver Danny Amendola on a trick play. The Patriots went for it on fourth-and-5 after that play, and Brady's throw to Rob Gronkowski was knocked away by Philadelphia's Jalen Mills.

Earlier in New England's drive, Brandin Cooks stayed motionless on the field for about a minute after a hard blindside hit to the head from Malcolm Jenkins at the end of a 23-yard catch. It was announced that Cooks wouldn't return.

Foles threw a 34-yard touchdown pass to a leaping Alshon Jeffery in the back of the end zone to give the Eagles a 9-3 lead in the first quarter.

Foles was 8 of 11 for 102 yards on the first two Philadelphia possessions.

The Patriots matched the Eagles' field goal on the opening drive. It was the first time in eight Super Bowls with Tom Brady and Bill Belichick that New England scored in the first quarter.

Tom Brady and the New England Patriots have finally scored points in the first quarter of a Super Bowl.

The Patriots answered an opening field goal by the Philadelphia Eagles with Stephen Gostkowski's 26-yarder for a 3-3 tie on New England's first possession.

It's the first time in eight Super Bowl appearances that the Patriots have scored in the first quarter with Brady and coach Bill Belichick. The key plays were Brady's completions of 28 yards to Chris Hogan and 15 yards to running back James White.

Both teams drove 67 yards to their first points.

A Metro Transit spokesman says 17 people were taken away after they blocked a light-rail line carrying Super Bowl ticketholders to the stadium.

Howie Padilla says no one was hurt in the protest, which blocked trains for about two hours ahead of Sunday's kickoff. Metro Transit had buses standing by to get ticketholders to the stadium in time.

The activists said they were protesting police brutality, as well as the light-rail trains being taken over by Super Bowl spectators rather than being available to ordinary citizens.

The Philadelphia Eagles have settled for Jake Elliott's 25-yard field goal and a 3-0 lead over the New England Patriots on the opening drive of the Super Bowl.

The Eagles had a first down at the 5 after Corey Clement's 16-yard gain on a catch and run. But a penalty and two incomplete passes forced Philadelphia to settle for the field goal.

The Patriots will take over looking for their first points in the first quarter in eight Super Bowl appearances with quarterback Tom Brady.

Quarterback Nick Foles had completions of 17 yards to Alshon Jeffery and 15 yards to Torrey Smith the play after Smith had a drop on second down.

The New England Patriots have won the opening coin toss for the Super Bowl and have deferred to the second half.

The Philadelphia Eagles will start the game with the ball and hope to be the first team to score on the opening possession of the Super Bowl since Devin Hester returned the opening kickoff for a touchdown for Chicago against Indianapolis in the 2007 game.

Carson Wentz is throwing passes in warmups for the Philadelphia Eagles.

The injured quarterback was walking gingerly and not stepping into the throws as he worked alongside starter Nick Foles.

Wentz tore a ligament in his left knee against the Los Angeles Rams in Week 14. Foles led playoff wins against Atlanta and Minnesota.

Foles is trying to join Bob Griese, Doug Williams and Jeff Hostetler as backups to win Super Bowls after starting no more than five games during the regular season.

The Eagles are playing the New England Patriots, who are trying to win their sixth Super Bowl with quarterback Tom Brady.

Winning the NFL MVP award might not be a great omen for Tom Brady.

The past eight winners of the AP MVP award to reach the Super Bowl have lost the game, including Brady in the 2007 season against the New York Giants.

The overnight temperature in Minneapolis reached minus-6 degrees and was up to 2 degrees around four hours before kickoff between the New England Patriots and Philadelphia Eagles.

The coldest previous range was the Detroit Super Bowl in 1982, with a low of 5 degrees and a high of 16 when it was played at the Silverdome. There was a chance for the Minneapolis high to reach 5 on Sunday.

When the Super Bowl was in Minnesota at the Metrodome in 1992, the outside temperature at kickoff was 26 degrees. That's the average high here for Feb. 4.

The coldest outdoor game in Super Bowl history was in New Orleans at Tulane Stadium in 1972, when the kickoff temperature was 39 degrees.