WASHINGTON - In the wake of the U.S. Supreme Court decision to overturn Roe v. Wade and eliminate federally protected abortion rights, an FDA regulation could still allow women access to abortion pills in states where abortions will no longer be legal.

In December 2021, the U.S. Food and Drug Administration made permanent a rule that allows patients to consult with prescribers through telehealth and receive abortion pills — also known as medical abortion — by mail. Although federal law trumps state law, abortion law experts say it’s still unclear whether states will be able to restrict the pills in a post-Roe America.

U.S. Attorney General Merrick Garland, in a statement released Friday following the ruling, said the FDA's approval of mifepristone means that "states may not ban Mifepristone based on disagreement with the FDA’s expert judgment about its safety and efficacy."

How do abortion pills work?

Mifeprex, better known as mifepristone, is a drug that blocks the hormone progesterone, which is needed for a viable pregnancy, according to the FDA.

Taken with misoprostol, the two drugs can be used through the first 10 weeks of pregnancy.

Both drugs are available as generics and are also used to treat other conditions.

Medication abortions accounted for 54% of all abortions in 2020.

The FDA said a scientific review supported broadening access to the drugs and found complications were rare. The agency has reported 26 deaths associated with the drug since expanding access in 2000, though not all of those can be directly attributed to the medication due to existing health conditions and other factors.

Medication abortion laws in the U.S. 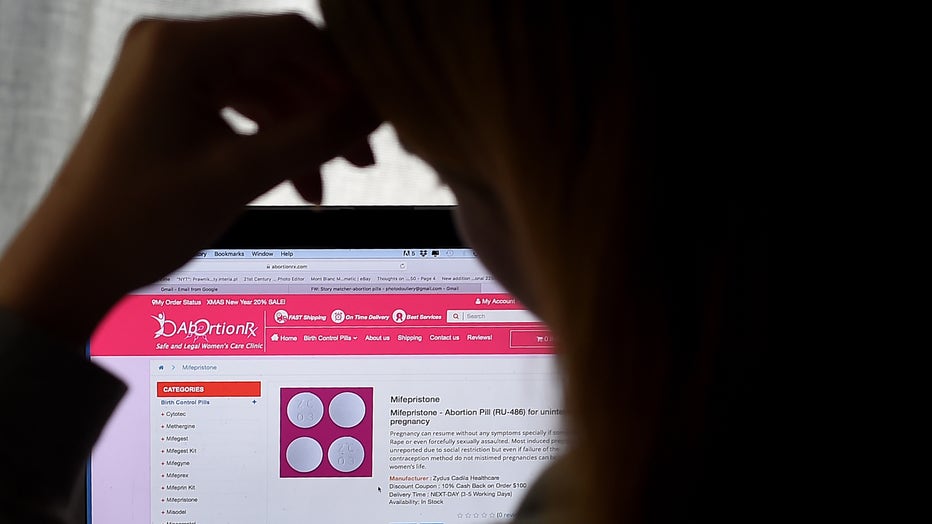 In this photo illustration, a person looks at an Abortion Pill (RU-486) for unintended pregnancy from Mifepristone displayed on a computer on May 8, 2020, in Arlington, Virginia. (Photo by OLIVIER DOULIERY/AFP via Getty Images)

In the months after the FDA made the telehealth rule permanent, state lawmakers introduced more than 100 restrictions on medical abortions in 22 states, according to the Guttmacher Institute, an abortion-rights research organization.

Eight states introduced legislation to ban all medical abortions, but none had been enacted as of May 2022, according to Guttmacher. Two states — Kentucky and South Dakota — have outlawed mailing abortion pills, and three states — Kentucky, South Dakota and Tennessee — made it illegal for anyone but a doctor to administer them.

A total of 19 states require a medical clinician to be physically present when abortion pills are given to a patient.

Whether that will all change following the Supreme Court’s ruling is yet to be determined.

"The general rule is that federal law preempts conflicting state law," said Laura Hermer, a professor at the Mitchell Hamline School of Law in St. Paul, Minnesota in an interview with the AP. "There is no question that the FDA has proper authority to regulate the drugs used in medication abortions. The question is whether a state can make a viable, winning argument that, for public health purposes, it needs to further regulate access to the relevant medications."

Hermer said she doesn’t think there is a valid public health reason because the published evidence is that the drugs are "exceptionally safe." But if a state gives embryos and fetuses full rights as people after the Supreme Court overruled Roe v. Wade "then all bets would be off."

Telemedicine providers have to abide by the laws of the state where the patient is, said Dr. Sarah Traxler, chief medical officer for Planned Parenthood North Central States in St. Paul. She acknowledged that some organizations disagree. "But," she added, "we don’t feel like we have liberty to mail pills from Minnesota to other places in the country where it’s illegal to provide medication abortion."

Thirteen states have trigger laws that immediately ban abortion if Roe v. Wade is overturned, and 26 states are certain or likely to quickly ban abortion, according to the Guttmacher Institute.