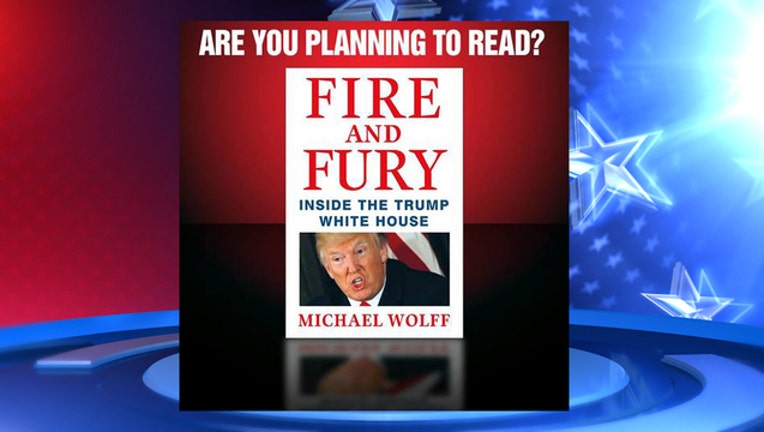 WASHINGTON (AP) - Michael Wolff's a provocateur who's said to love a brawl and once bemoaned the glare of the spotlight - and the bigger disappointment of watching it move on.

Obscurity is a threat to Wolff no longer.

His incendiary new book on President Donald Trump is drawn from what he said was regular access to the West Wing and more than 200 interviews, including some three hours with Trump himself.

It blew open what seems an inevitable feud between the publicity-loving president and his former adviser Steve Bannon, who is quoted extensively and unflatteringly describing Trump, his family and advisers.

Trump's lawyers sent Wolff and his publishers cease-and-desist letters, as they had to Bannon. Instead of halting publication of "Fire and Fury: Inside the Trump White House," Wolff's publisher accelerated its sale to Friday, due to "unprecedented demand."

As of midday Friday, the book was No. 1 on both Amazon.com and BarnesandNoble.com.

"I authorized Zero access to White House (actually turned him down many times) for author of phony book! I never spoke to him for book. Full of lies, misrepresentations and sources that don't exist. Look at this guy's past and watch what happens to him and Sloppy Steve!" Trump wrote. White House spokeswoman Sarah Huckabee Sanders said the White House had rejected some two dozen of Wolff's requests for an interview with Trump.

The author retorted on NBC's "Today" show: "I absolutely spoke to the president. Whether he realized it was an interview or not I don't know. But it certainly was not off the record." Wolff said he spoke with Trump for a total of about three hours over the course of the campaign and after Trump's inauguration. He added that he has recordings and notes and remains "absolutely in every way comfortable with everything I've reported in this book."

"My credibility is being questioned by a man who has less credibility than, perhaps, anyone who has ever walked on earth," Wolff said.

Wolff has given Trump's allies fodder, particularly with an acknowledgement in the introduction that he could not resolve discrepancies between some accounts in a White House riven by rivalries.

"Many, in Trumpian fashion, are baldly untrue," Wolff writes of some accounts. "Those conflicts and that looseness with the truth, if not reality itself, are an elemental thread of the book." He says he "settled on a version of events I believe to be true."

For example, Wolff writes in the book that Trump didn't know who former House Speaker John Boehner was on election night 2016. Sanders disputes that, pointing to public photos that show the golf enthusiasts had hit the links over the years. Two people close to Boehner confirmed that and said they had spoken before and after the election.

Sanders also derided Wolff's contention in the book that Trump and his family had not wanted to win the election.

For his part, Trump went after Bannon in an unusual White House statement. Wolff and his publisher did not respond to a request for comment and an interview.

Wolff built his four-decade career writing about some of the world's rich and powerful people - including Rupert Murdoch - in seven books and across a wide range of newspapers and magazines. Sometimes, he critiqued the media. And often, he got scathing reviews back on his writing style, his focus on atmospherics and his factual mistakes.

"One of the problems with Wolff's omniscience is that while he may know all, he gets some of it wrong," wrote the late David Carr in The New York Times, noting some discrepancies in dates in Wolff's 1988 book about Murdoch, "The Man Who Owns the News: Inside the Secret World of Rupert Murdoch."

But Wolff was getting support from other corners. Janice Min, an owner of The Hollywood Reporter, tweeted that she was one of the few guests at a dinner reported in the book at Roger Ailes' house in January last year. According to Wolff, Bannon discussed Trump's plans for appointing Cabinet and other advisers and Ailes warned him about the qualifications of some. "It's not a deep bench," Bannon acknowledged, according to the book.

"So I was one of the 6 guests at the Bannon-Ailes dinner party in January 2017 and every word I've seen from the book about it is absolutely accurate," Min tweeted.

Nearly a year ago, Wolff criticized news outlets covering their own industry even in the time of Trump.

"The media should not be the story," he said on CNN in February.