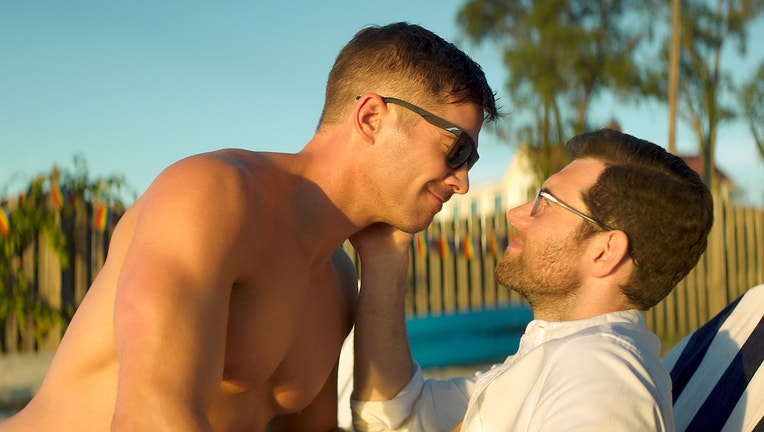 CHICAGO - Step aside, Hugh Grant and Diane Keaton, the pantheon of great, neurotic rom-com leads has found a new king in Billy Eichner. Best known for yelling at people on the street (or yelling at them in the "Parks and Recreation" offices), Eichner unveils a softer but no less high-strung version of himself in "Bros," his new Judd Apatow-produced studio rom-com about two gay men "maybe, possibly, probably, stumbling towards love. Maybe. They’re both very busy."

As a romantic comedy, "Bros" is a fun time at the movies, jam-packed with genuine laughs that make up for its at times more surface-level pathos. As a message statement, it’s a clumsy if well-meaning celebration of the LGBTQ+ community. But as a showcase for Eichner, it’s an absolute knockout. Those who watched his work on the hidden gem Hulu comedy series "Difficult People" have already seen this more vulnerable, nuanced side of Eichner before. For everyone else, he’ll have them at hello.

Eichner’s talents extend beyond just his winning performance as Bobby Lieber, a 40-year-old podcast host and museum curator with zero interest in commitment. Eichner also co-wrote the screenplay with director Nicholas Stoller ("Forgetting Sarah Marshall") and his sardonic voice rings through like a bell. The film’s comedic tone-setter comes early, when it smash-cuts from an ejaculation joke to one of those wistful Gershwin-scored New York City montages you might find in a Nora Ephron movie.

It’s an early heads up that "Bros" is steeped as much in "You’ve Got Mail" earnestness as it is "There's Something About Mary" raunch. And while combining puerile humor with genuine heart is basically the entire Apatow model, Eichner puts a uniquely queer spin on the template that makes "Bros" stand out in a sea of R-rated rom-coms about commitment-phobes. 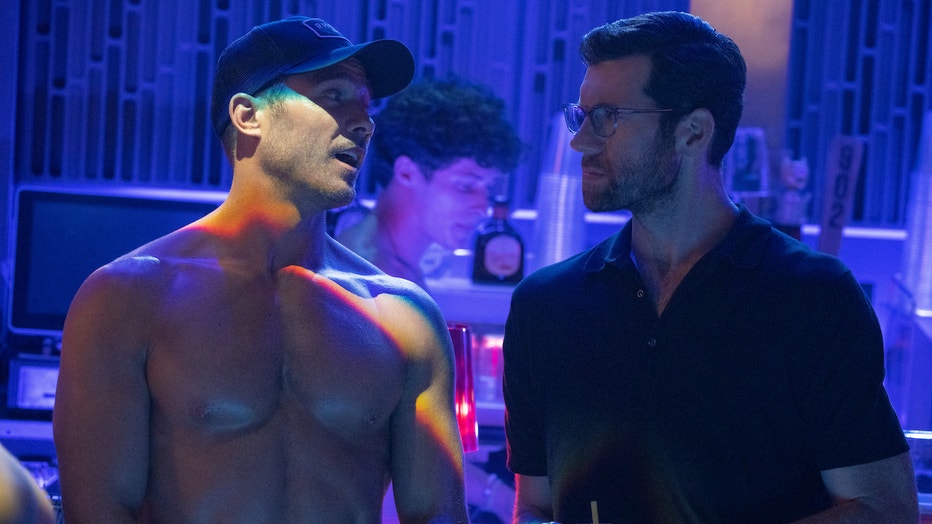 For instance, Bobby first crosses path with his "very hot, very boring" love interest Aaron (Luke Macfarlane) at a launch party for "Zellwegr" — a dating app for gay men who just want to talk about actresses and go to bed. (It’s exactly the kind of joke you hire comedian Guy Branum to deliver.) And "Bros" has a refreshingly casual attitude towards non-monogamous, non-heteronormative approaches to sex and dating.

WATCH FREE ON TUBI: Hugh Grant in the queer period romance "Maurice" — get the app

Bobby himself has never been in love, nor in a relationship, and as the film opens he seems torn on whether or not that’s a good thing. On the one hand, he clearly values his independence and autonomy and the freedom of a single life; on the other, he’s also got decades of unpacked insecurities lurking beneath his confident, sarcastic exterior. For Bobby, being alone is a defense mechanism — a way to stave off rejection by never asking for anything in the first place. "No one’s more emotionally unavailable than me," is his biggest brag, and he doesn’t seem the least bit phased when someone opens with the pick-up line, "You look angry."

WATCH FREE ON TUBI: The 1996 documentary "The Celluloid Closet" — get the app

To push Bobby out of his comfort zone, "Bros" smartly pairs him with a love interest who’s his match in commitment-phobia but his polar opposite in everything else. For human golden retriever Aaron, staying single isn’t a way to avoid rejection so much as skirt any kind of internal self-reflection. Where Bobby buries his insecurities behind his biting wit, Aaron buries his beneath his CrossFit abs and a pathologically passive "go with the flow" demeanor. "Bros" understands the opposites-attract appeal of pairing a high-strung neurotic with a sensitive himbo (one of the best, most underutilized rom-com pairings of them all), but it’s also smart enough to see what those two very different archetypes have in common too. 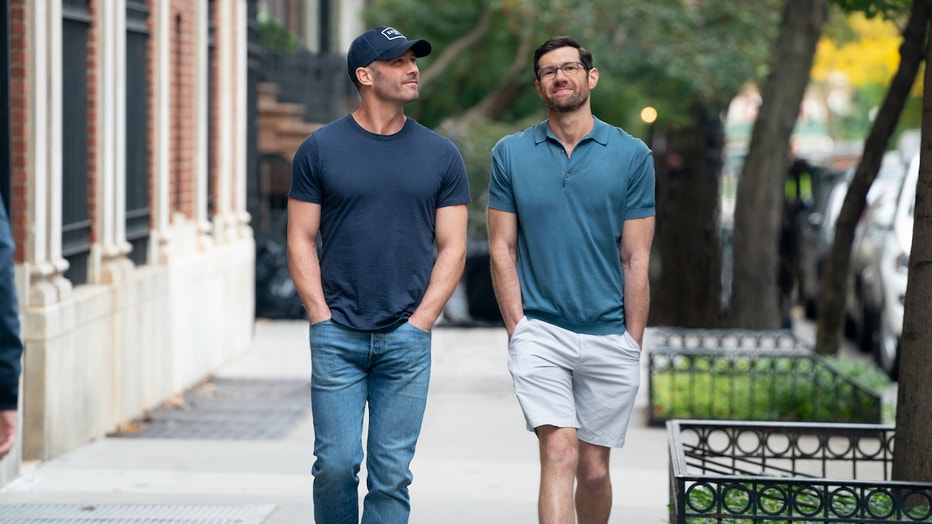 Indeed, the nuanced interpersonal stuff in "Bros" is so good (and so funny) it’s a shame the movie overbroadens its focus elsewhere. Like this year’s other big, buzzy gay rom-com, "Fire Island," "Bros" clearly feels an immense pressure to do right by the LGBTQ+ community as a whole (a pressure few, if any, straight romances ever face). But it’s hard to be all things to all people. "Fire Island" prioritized its delightful queer found family themes, somewhat to the detriment of its central romances. "Bros," meanwhile, couples its winning love story with an ode to the broader LGBTQ+ experience that feels a little tacked on. 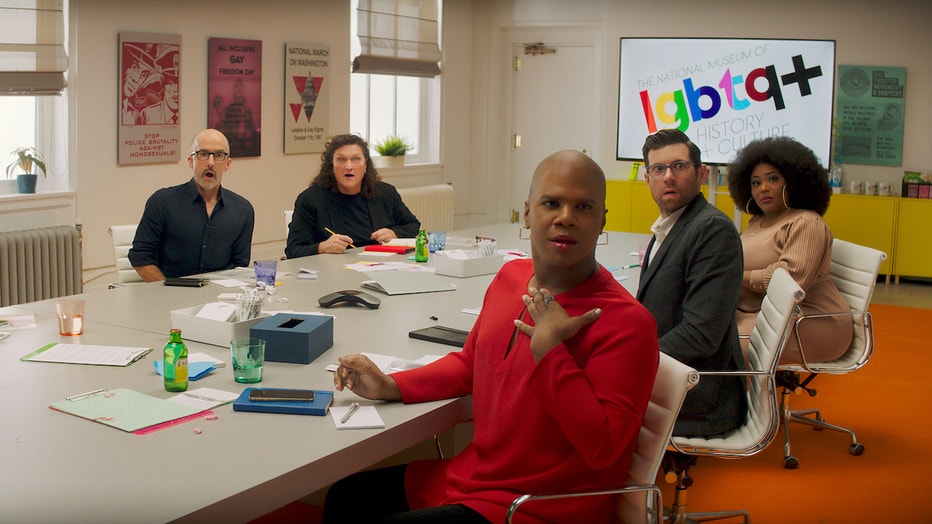 Though it’s fun to see Eichner bounce off supporting players like Jim Rash, Dot-Marie Jones, Miss Lawrence, Ts Madison, Eve Lindley and Bowen Yang, a subplot about the first national LGBTQ+ history museum trying to pick its final exhibit winds up feeling like more of a cultural essay than a story. And that’s on top of Eichner’s understandable, if sometimes overwhelming, desire to parse the entire Xennial gay male experience in just one movie, lest he never get the chance to make another.

WATCH FREE ON TUBI: The camp queer classic "But I’m A Cheerleader" — get the app

There are worse problems for a movie to have than earnest representation, of course, and Bobby is such an erudite overthinker that "Bros" almost gets away with it all as a reflection of what it’s like inside his brain. (The movie even gets ahead of this very critique when Bobby recalls how his dad used to tell him, "Not everyone wants to hear about this gay sh-t all the time.") But in splitting its focus between so many themes, and in rushing to include so many cameos and supporting players, "Bros" loses some of the magic that happens when it zeroes in on the specificity of its two leads and their unique dynamic with one another. 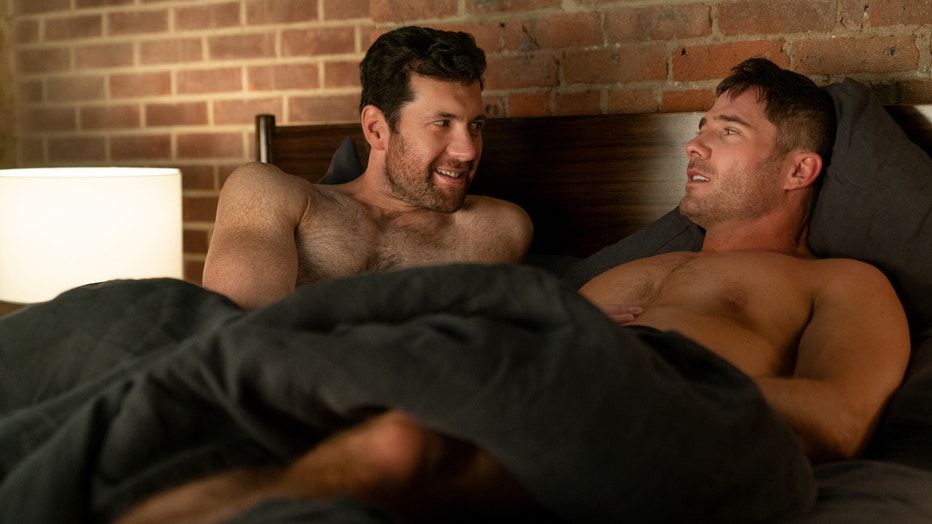 Still, if "Bros" doesn’t quite crack that top-tier of the romantic comedy echelon, it more than makes the case for Eichner as a romantic leading man. The greatest rom-com performances often come with a tinge of melancholy — a genuine sense of fear that things might not work out for them in the end. Beneath his brash exterior, Eichner has that sensitivity in spades. If he turns out to be the new Meg Ryan, we’ll happily keep having what he’s having.

Make it a double feature with "10 Truths About Love," streaming free on Tubi

10 Truths About Love (2022): Camilla Belle stars as Carina Franklin, a thriving romance columnist who has her own love life totally figured out — at least until her longtime boyfriend dumps her. Even worse, her editor insists on giving her column a "male perspective" and hires a writer named Liam (David Lafontain) to balance her out. When the two new co-workers clash, Liam sets out to demonstrate that his tactics work by helping Carina win back her ex. Of course, in trying to prove each other wrong, Liam and Carina might just realize how right they really are for each other. "10 Truths About Love" is a Tubi Original. Rated TV-14. 90 minutes. Dir: Brian K. Roberts. Featuring: Camilla Belle, David Lafontaine, Jennifer De Lucia, Karn Kalra, Paula Rivera, David Keeley.

How to watch "Bros"

"Bros" debuts in theaters nationwide on Sept. 30. It is not currently available to stream.