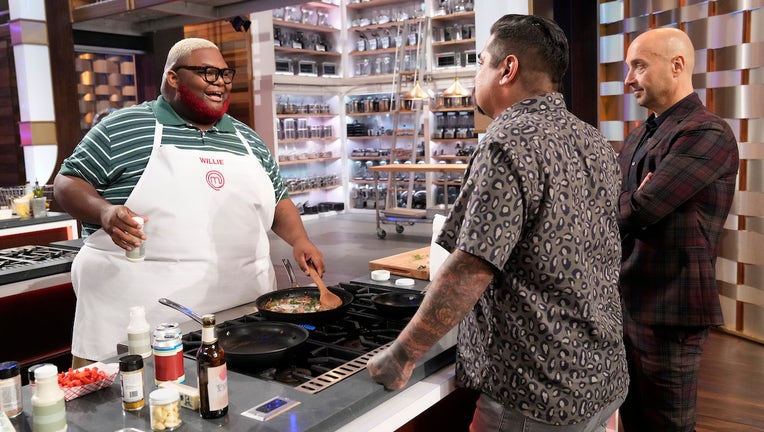 Chicago - Welcome back to "MasterChef" recaps for another other two-course culinary gauntlet (or another pair of back-to-back episodes, whichever you prefer). First, the top 10 chefs must make haute cuisine out of convenience-store food in "Gas Station Gourmet," then they take a peppery page from a previous champion’s book in "Winners Mystery Box — Gerron Hurt." Miss a week? You can read our recaps and watch On Demand, on FOXNow, on Hulu and on Tubi, FOX’s free streaming service. This television station is owned by the FOX Corporation.

"MasterChef: Back to Win" is just barreling down the road to the finale with its back-to-back episodes, as the culinary melee continues and the field grows ever thinner. But as the competition heats up, so do the dishes, as the top ten chefs face a couple of grueling challenges to their chef sensibilities.

"MasterChef: Back to Win" recap: From gas station to gastronomy

First, we’ve got "Gas Station Gourmet," in which the remaining chefs enter the MasterChef Kitchen to find a makeshift filling station shelf filled with all kinds of road-friendly snacks you’d find at any Mobil: sunflower seeds, chips, pretzels, candy, and so on. The brief: Use at least three of these gas station snacks in a gourmet dish that accentuates their qualities and feels cohesive. 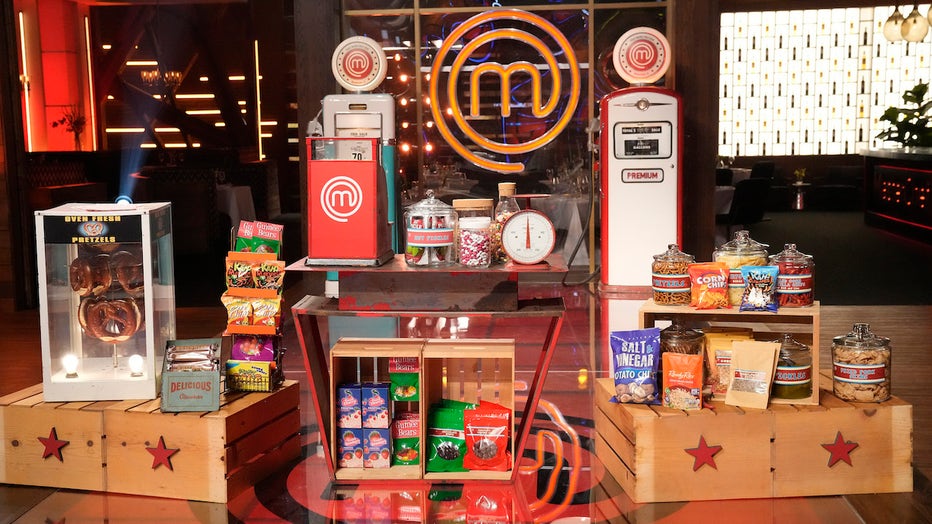 It’s a big challenge for the remaining chefs — except Derrick, whose immunity pin lets him sit out this particular pit stop. And to their credit, most of the chefs take enormous swings with their ingredients: Christian’s melting gummy bears into a sauce for his corn chip-crusted snapper, for Pete’s sake. But others are playing it seemingly safe, as in the case of Willie’s unambitious chicken pot pie, which he gas-station-ifies with a few pretzels crunched in the pastry.

Michael is arguably the most ambitious, shooting for a molten lava cake with a host of crunchy gas station treats he’ll combine into a salty, crunchy accompaniment. But he runs into some major problems, most notably when he accidentally turns off his oven and doesn’t realize for several crucial minutes. Eek! His solution is to bump up the oven to 500 degrees and pray it’ll work, but he’s frazzled from this setback.

The cook is done, and judges Gordon Ramsay, Aarón Sánchez and Joe Bastianich quickly pick their top three. First up is Bowen, with his impressive-looking pork katsu cordon bleu sitting on a cherry cola glaze, with a pile of sweet potato fries on top. (Love that charred lemon, Bowen — good move!) Gordon says it "looks straight out of a gastropub," but the sauce is sweet; it could have been rounded out with more chili.

Next is Christian, whose gummy bear-beer sauce is simply too bizarre an idea to ignore. To his delight (and Gordon’s shock), it works: "From the bottom of my heart, it’s f--king delicious," he gushes. "It’s edgy, dangerous, and good." Joe loves the fry on the fish, and jokes that Skittles risotto is next on the menu. 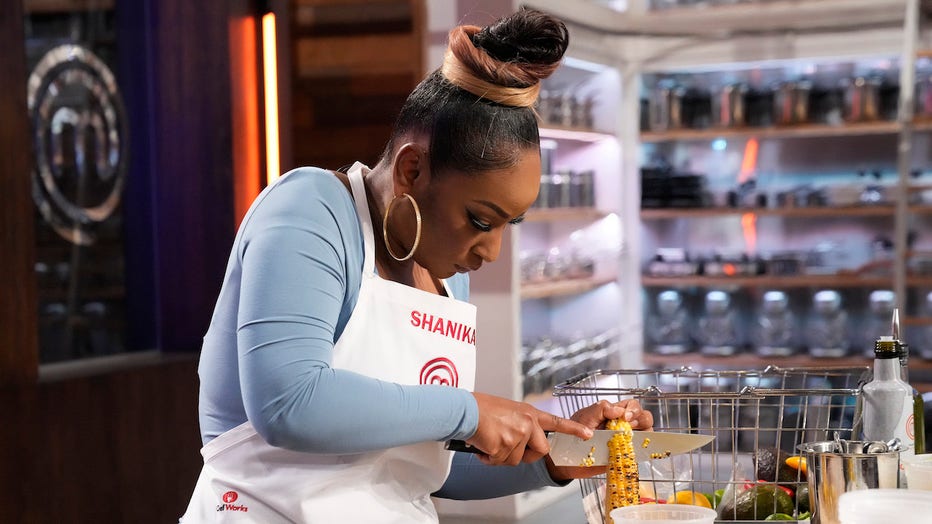 Last but not least, Shanika cooked a Cool Ranch Dorito-encrusted snapper with a lemon-lime soda avocado puree and lemon-lime herb sauce. As she explains, the dish is an ode to her mother, whom she lost young, but whose memories of cornmeal-crusted snapper live on in her memory. In her interviews, Shanika fights back tears and admits, "I don’t like emotions." But it’s a genuinely heartwarming moment, especially since the dish is good — crispy, delicious, super summery and light. "If it takes that kind of journey to create this kind of food, I think it’s worth taking," Joe offers.

It’s that level of cooking that earns her and Christian (presumably due to his gummy bear sauce — a culinary Hail Mary if ever there was one) both immunity pins.

Now for the bad news: Willie, Brandi, and Michael are in the bottom three. Willie’s pot pie is unelevated and unexciting; Gordon admits the gas station snacks feel thrown away rather than highlighted, and Joe complains the dish is too greasy and rich. At this point in the competition, a pot pie is hardly elevated, and it’s a case where Willie’s down-home roots can bite him in the butt.

WATCH FREE ON TUBI: Lidia Bastianich (Joe’s mom!) welcomes you to "Lidia’s Kitchen" — get the app

In contrast, it’s Brandi’s ambition that lands her in the danger zone: she’s crafted a strange-looking orange arepa with cola skirt steak and Fruity Pebble crema. The judges are put off by the color, the lack of salt and flavor in the arepa and the lackluster attempt to incorporate the ingredients. "You would never steep creme fraiche in cereal and expect it to impart flavor," Aarón warns. 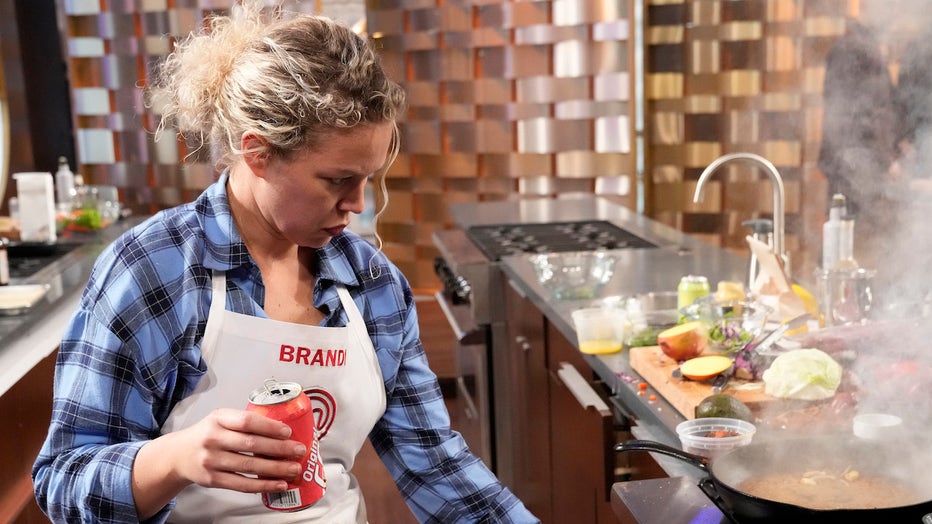 Michael is most disappointed since the high heat turned his lava cake into fondant, and a bad one at that. "Not even the finest pastry chef in America would attempt that in 45 minutes," Gordon says; the fondant is "gross," with crystallized sugar around the edge, and Joe says it tastes like "chocolate scrambled eggs."

Still, his toppings elevated his ingredients well enough to keep him in the competition, as Brandi’s top-to-bottom missteps get her the boot this episode.

"MasterChef: Back to Win" recap: That’s a spicy competition

From there, we roll right into "Winners Mystery Box — Gerron Hurt," in which another previous "MasterChef" winner pops up to challenge his fellow chefs. This time: Peppers! Overflowing from Hurt’s box in a bold array of colors, they’re the basis for Gerron’s challenge to the chefs. They’ve got 45 minutes to build a dish that features these peppers as the hero. (Christian and Shanika sit this one out from the balcony, but they’re to be the last immunity pin holders of the competition — no more will be given for the rest of the season.) 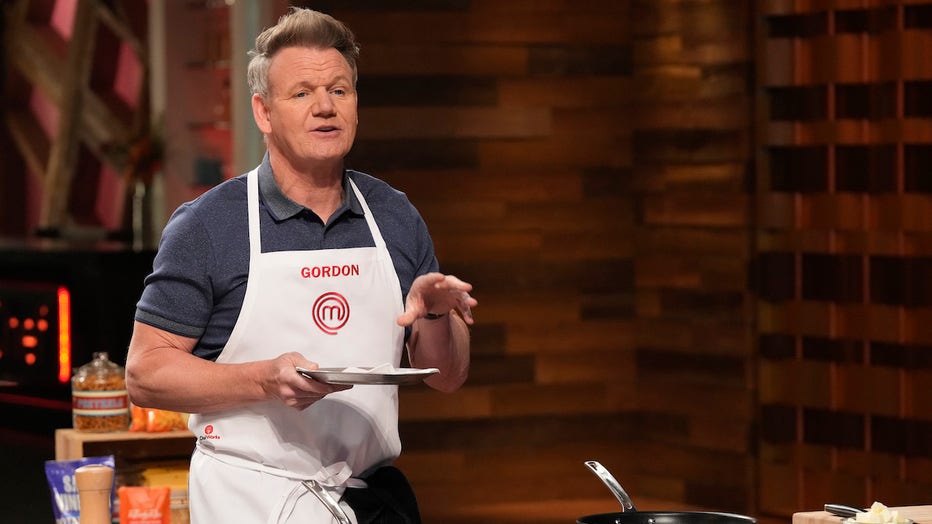 It’s a tough pill for Emily, who infamously hates spice and peppers: "It’s my nightmare challenge." But most everyone else is excited, especially Bowen, who calls himself "a sweet and spicy boy." Six of the chefs are leaning into savory, but Derrick, ever the wildcard, is aiming for sweet: a churro with a chocolate chili sauce.

Once the cook is done, the judges decide to taste everyone’s dishes, now that the field is so small. Most everyone gets solid notes: Amanda’s batinjan harra (a Lebanese eggplant dish) wows the judges with its playful textures, and Willie bounces back nicely from last week with a flavorful crawfish and shrimp etouffee. Michael’s spice-rubbed hanger steak pairs wonderfully with the cooling feta and eggplant puree he served, and Dara’s potato and pea samosas make Aarón’s palate "dance."

But the big highlights are Amanda and — shock of shockers — Emily, who overcame her trepidation to deliver a shrimp Fra Diavolo that looks inviting on the plate and uses spice well. "You should be using these ingredients more often," Gordon beams. Miraculously, it’s enough to give her the win; she may not get a pin, but she gets a huge advantage in the next competition. 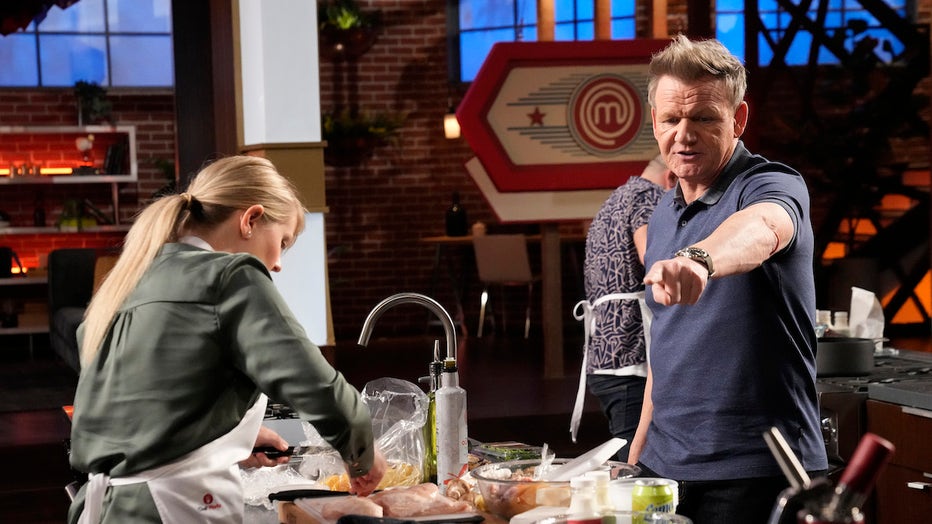 Derrick, and Bowen, however, get the worst marks of the night. Derrick’s used too thin a tip on his piping bag, resulting in small, crunchy churros that are hardly appetizing. But Bowen’s dish baffles the judges the most: a pale banana pepper stuffed with a stomach-churning combo of pork, peppers and cooked caviar. For those not in the know, Gordon lays out why you don’t cook caviar: it turns hard, into "little ball bearings in your mouth." Add to that a dense, hockey-puck-like mofongo on the bottom, and that amateur-level mistake turns this dish into the one that knocks Bowen out of the competition.

If this week has taught us anything, big swings can either send you to the top or come back to kick you in the butt. As the remaining eight chefs sharpen their knives in the season's final stretch, we’ll have to see if they learned those lessons.

Next time on "MasterChef: Back to Win"

The show takes a page from Bon Appetit and pairs off chefs to cook the same dish without being able to see each other. Cue the frantic tossing of utensils over a ten-foot dividing wall!

Dish of the night

I could just lose myself in about a dozen of Dara’s beautiful-looking samosas, with those bright green and red chutneys popping off the plate.

About the writer: Clint Worthington is a member of the Chicago Film Critics Association. He is the founder and editor-in-chief of The Spool, and a Senior Staff Writer at Consequence. You can find his other work at Vulture, Nerdist, RogerEbert.com and elsewhere.

Mary Berry’s Absolute Favorites (2014): "Great British Bake-Off" icon Mary Berry cooks up comfort food in her cozy kitchen, casually coaxing curious cooks into concocting Berry’s favorite recipes. (No, we will not apologize for any of that alliteration.) One season, eight episodes.

How to watch "MasterChef"

"MasterChef" airs Wednesdays at 8 p.m. EST on FOX. You can also watch On Demand or stream online via FOXNow.All 12 seasons of the show, including the first six episodes of the current season, are streaming on Hulu. And there’s a whole world of "MasterChef" streaming free on Tubi, including beloved series "MasterChef Junior" and several international editions.