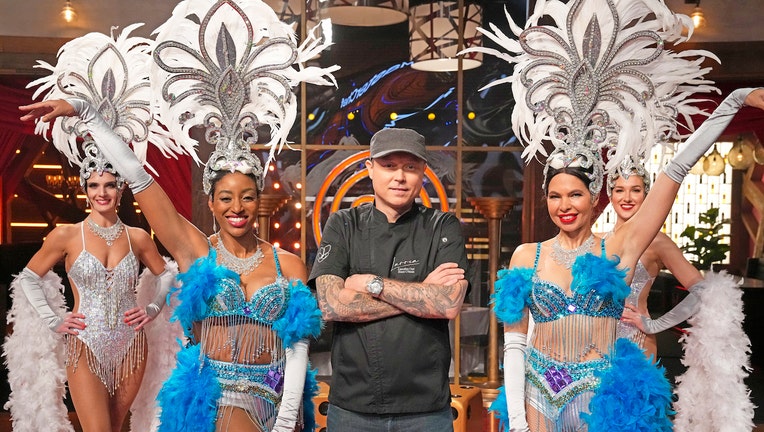 Chicago - Welcome back to "MasterChef" recaps! In episode 5, "Mystery Box — Spirit of Vegas," the chefs get a Sin City-inspired challenge, but their booze-infused dishes may make them lose their shirts. Miss a week? You can read our recaps and watch On Demand, on FOXNow, on Hulu and on Tubi, FOX’s free streaming service. This television station is owned by the FOX Corporation.

With the elimination of Stephen (a semifinalist in his season!) last week, it’s clear "MasterChef: Back to Win" is refusing to take any prisoners. It doesn’t matter how far you got last time you were in the "MasterChef" Kitchen: "The slate has been wiped clean," Gordon Ramsay warns them.

Any one of them could be on the chopping block — except, of course, for last week’s immunity pin winner Emily, who gets to enjoy this episode’s challenge from the balcony, serving up encouragement and vicarious concern instead of food.

Speaking of which, this week’s challenge is Las Vegas, baby! The remaining chefs walk into the kitchen to see some Vegas Strip-themed accouterments, wooden boxes at their stations and one enormous crate behind Gordon, Aarón Sánchez and Joe Bastianich. It’s a mystery box challenge! (Fred, as always, is adorably perturbed, hoping there won’t be any live animals under that big box. "I already made a promise to my mother that I wouldn't kill animals on live television," he says.)

WATCH FREE ON TUBI: Get stressed about risotto in Gordon Ramsay’s "Hell’s Kitchen" — get the app

Never fear, Fred: The big box is hiding season 7 winner Shaun O’Neale and two Vegas showgirls. The theme this season seems to be demonstrating the impact "MasterChef" can have on contestants’ careers, especially if they win: Shaun tells the chefs about the new restaurant he’s opening in Vegas, his new cookbook and so on. Shaun is "living proof of what MasterChef can do," says Gordon, a reminder of what a redemptive win on "Back to Win" might offer its contestants.

"MasterChef: Back to Win": Boozy roulette

This week’s mystery box challenge comes from Shaun, whose new Vegas joint features many dishes that use alcohol as an ingredient: They must construct a dish that highlights whatever random bottle of spirits is under their particular boxes. (And remember, this season they have to make three identical dishes to test the consistency of their skills.)

Some contestants take to their selections well: Cate is excited to get some versatile bourbon, and Michael is particularly jazzed to work with tequila. Others, though, get some curveballs thrown at them: Brandi, a country gal if there ever was one, balks at receiving limoncello. ("It tastes like what you’d clean your countertops with!," she argues.) Fashion-forward Tommy doesn’t really know what to do with scotch, since he’s never tasted it (he’s more of a white wine or champagne fella) and Shanika is not too happy to get gin, saying that it "tastes like poison." And naturally, Dara and Shayne are underage, so they’ve never tasted booze (wink-wink); Shayne proudly says he’s "more of a water guy." 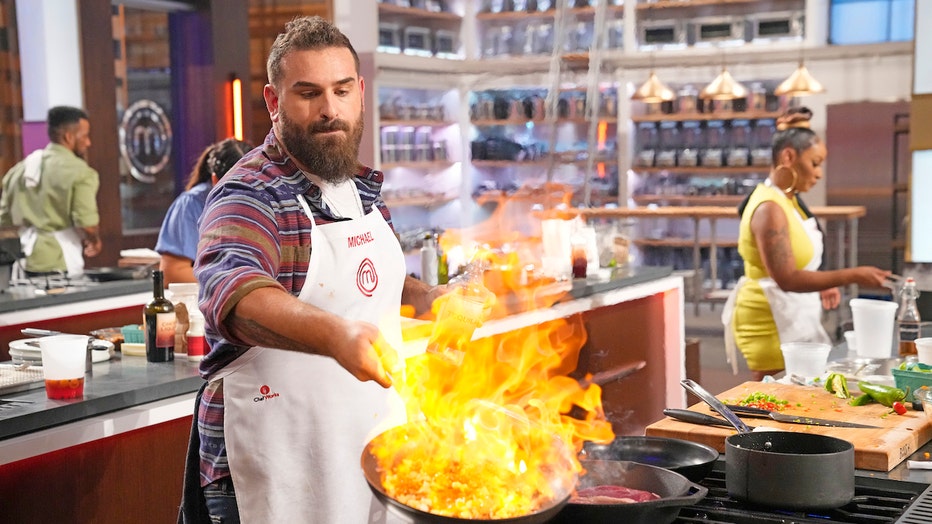 "MasterChef: Back to Win": Duck amok

The chefs go to work pairing proteins and flavor profiles with their respective boozes, and predictably, several of them go for more neutral white meats that can really highlight those strong flavors. Michael chooses duck, Shayne and Shanika go for pork, etc.

Some of the chefs have some really inspired ideas for what to do with their respective spirits: Fred’s taking the biggest swing of the night by making krempita, a Montenegrin dish that usually involves layers of puff pastry and custard. But his version will use phyllo dough, which he is making from scratch. It’s a bold move. 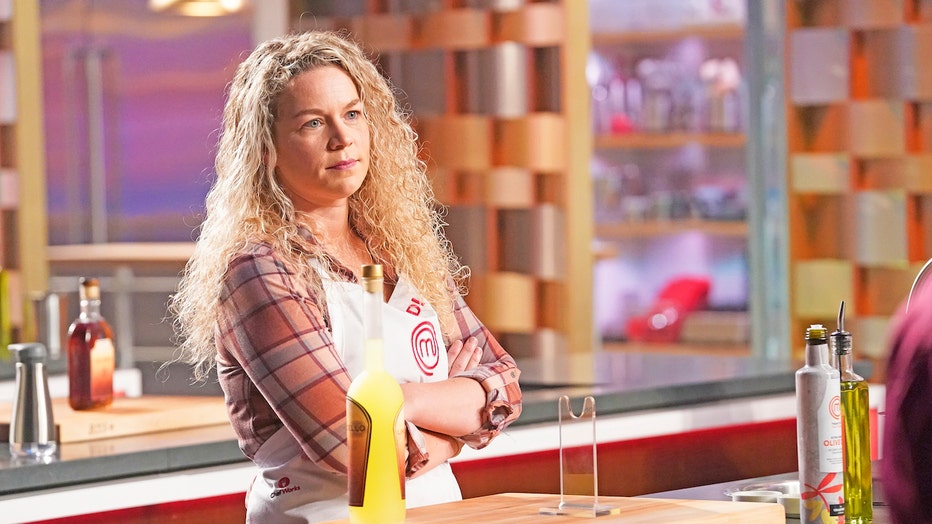 But not everyone’s having a great time, as Brandi is banging her head against the wall to figure out what to do with this limoncello. "That limoncello is rough," she mutters to herself in the pantry. "When I say rough, I mean rough." Still, rather than go the expected sweet route, she’s going savory, and hopes the inventiveness pulls her through.

Dara, meanwhile, is struggling with a tiramisu-inspired tropical cake that has so many elements Joe notes that it sounds like "three different desserts." What’s more, her dark rum caramel has crystallized, which is throwing her for a loop. "If it’s not great, don’t put it on the plate," Samantha tells her, which is wise; all the best advice rhymes, after all.

"MasterChef: Back to Win": Hardly a cakewalk

60 minutes and some sweat-inducing flambés later (Fred tries to blow on his flambé to put it out, bless), the cook is done! And after some deliberations, they’ve got a top and bottom three to highlight.

The top three starts with Christian’s coconut bang shrimp, a simple but sexy-looking dish that Gordon says "hits the jackpot" (good Vegas pun, Gordon). Brandi’s big-swing limoncello-seared salmon is perfectly cooked and impresses even the exceedingly-Italian Joe, who apparently orders a "limoncello back" as a shot after a beer.

WATCH FREE ON TUBI: Lidia Bastianich (Joe’s mom!) welcomes you to "Lidia’s Kitchen" — get the app

But the real marvel, and the natural winner of the immunity pin for next week, is Fred’s krempita with mascarpone vanilla cream and a miso apple brandy butterscotch. "You plate with such beautiful finesse," Gordon marvels, and they’re all blown away that he made phyllo dough from scratch — a first in the MasterChef Kitchen.

Next come the bottom three. Dara’s rum-soaked cake is hardly "soaked"; it’s bone dry, and the layer cake just looks like three silver dollar pancakes with some fruit stacked on top. Joe thinks it’s heavy and greasy, Aarón can’t taste the rum and even Dara admits she "was a mess today." 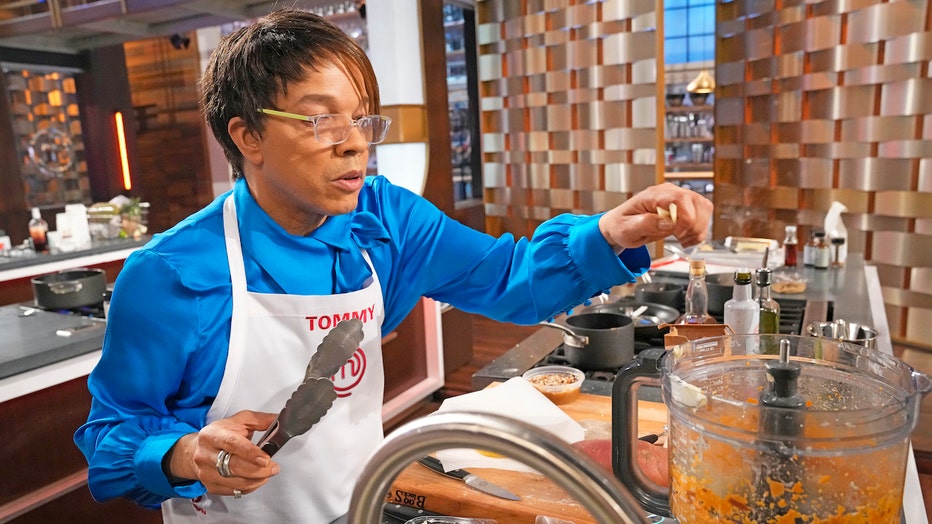 At the start of the challenge, Tommy said he wanted to "bring a little fashion" to his dish, but his sweet potato tartelette is just a brown-on-brown mess. What’s more, he made the bizarre decision to melon ball his roasted sweet potato "so it doesn’t look so unattractive." "Is this really what it’s supposed to look like," Joe asks accusatorily, balking at his choice of a mustard-yellow plate to further muddy the sludgy brown dish. This is the second week Tommy’s been in the bottom three, and I can’t help but wonder if his over-the-top ideas don’t get in the way of his cooking.

Luckily for him, though, Cate’s stone fruit spiced cake was even worse: She horrifically undercooked it, to the extent that she just had to tear bits of variably-cooked cake off the pan, scatter them on the dish, and call it "deconstructed." Joe sees through that gambit though, and Gordon just looks at her disappointingly. "It reminds me of a dish that’s been sent back to the kitchen when someone’s finished her dessert," he sighs.

That’s enough to earn Cate, who was also a semifinalist in her season, this week’s elimination. She’s tearful in her talking-head interview, but confident that she did the best she could. "Sometimes the sh--t hits the fan and you’ve gotta duck." Another reminder that this season of "MasterChef" is no joke, and every spin of the roulette wheel could be your last.

Dish of the night

I mean, it’s gotta be Fred’s krempita, which a) looks amazing and b) is all the more impressive knowing he made his own phyllo dough. For reference, in Gordon’s own home cooking shows, he just tells you to buy your own phyllo and puff pastry because it would be too time-consuming and complicated. For him to pull it off in an hour is nothing short of miraculous. He deserves the win.

Next week on "MasterChef"

We go outside for a team challenge, and Gordon throws things!

"MasterChef" airs Wednesdays on FOX. The first two episodes are also currently available to stream on Hulu. Recaps run weekly, and you can read them all below.

About the writer: Clint Worthington is a member of the Chicago Film Critics Association. He is the founder and editor-in-chief of The Spool, and a Senior Staff Writer at Consequence. You can find his other work at Vulture, Nerdist, RogerEbert.com and elsewhere.

Mary Berry’s Absolute Favorites (2014): "Great British Bake-Off" icon Mary Berry cooks up comfort food in her cozy kitchen, casually coaxing curious cooks into concocting Berry’s favorite recipes. (No, we will not apologize for any of that alliteration.) One season, eight episodes.

How to watch "MasterChef"

"MasterChef" airs Wednesdays at 8 p.m. EST on FOX. You can also watch On Demand or stream online via FOXNow.All 12 seasons of the show, including the first four episodes of the current season, are streaming on Hulu. And there’s a whole world of "MasterChef" streaming free on Tubi, including beloved series "MasterChef Junior" and several international editions.