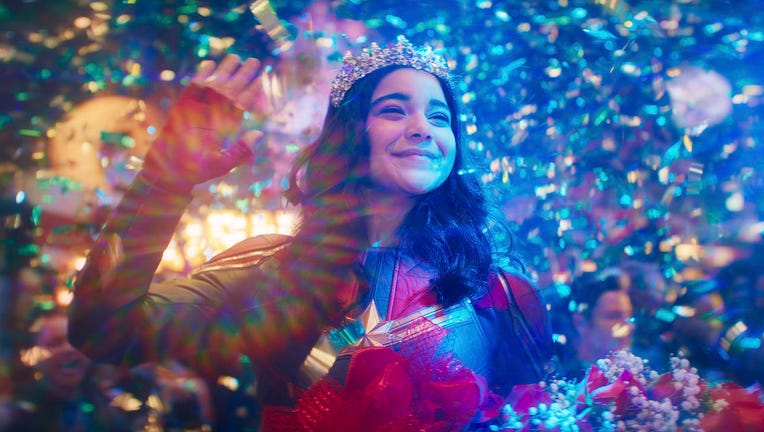 CHICAGO - Jo March. Andie Walsh. Lara Jean Covey. Lizzie McGuire. Each generation gets its own creative, dreamy and slightly nerdy teen girl protagonist. The latest to join their storied ranks is Kamala Khan (Iman Vellani), the 16-year-old heroine of the new Marvel Disney+ series "Ms. Marvel." A breakout comic book character, Kamala makes her live-action debut in a winning teen series that’s so endearing, it would still be worth watching even if it didn’t involve superheroes at all. But the fact that "Ms. Marvel" is deeply steeped in MCU lore will hopefully help bring her teen girl appeal to an audience just as wide as the one Spider-Man has enjoyed over the years.

Anchored by Vellani’s effervescent lead performance, "Ms. Marvel" has an energy that sits somewhere between a Netflix teen rom-com and a CW superhero show, all placed within a cheerful, vibrantly-colored world that calls to mind the films of Gurinder Chadha ("Bend It Like Beckham," "Blinded by the Light"). Kamala lives in Jersey City with her protective Pakistani-American parents (Zenobia Shroff and Mohan Kapur); attends mosque with her activist-minded hijabi pal Nakia (Yasmeen Fletcher); and fangirls out about the Avengers with her tech-whiz best friend Bruno (Matt Lintz). The adults in Kamala’s life all want her to get her head out of the clouds and start focusing on her future. But when an old family heirloom unlocks some phenomenal cosmic powers, her superhero fandom suddenly gets some unexpected real-world applications. 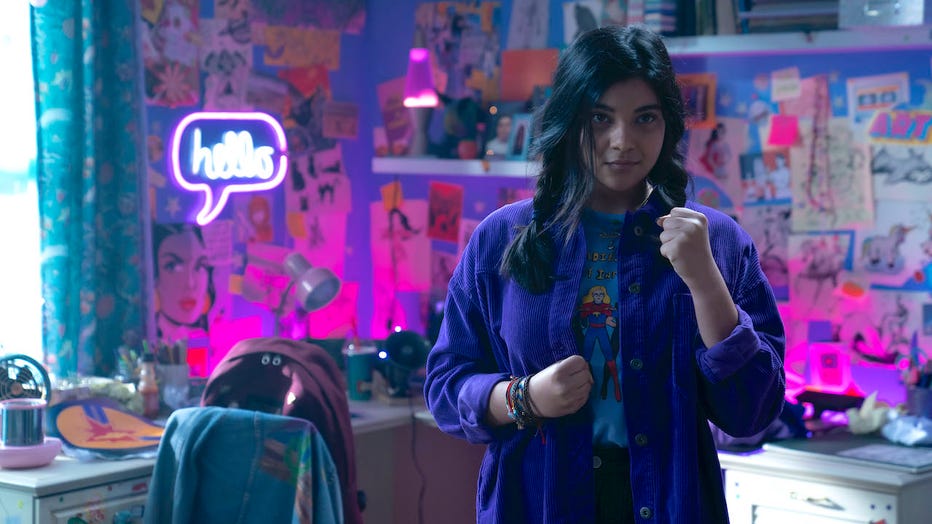 Though Marvel has big screen plans for Ms. Khan — who will next pop up in the "Captain Marvel" sequel, "The Marvels" — one of the best things about "Ms. Marvel" is that Kamala’s origin story feels like a proper TV show, not just an event miniseries. The two episodes screened for critics mostly focus on introducing a sprawling ensemble of endearing characters and a quirky world you want to return to week after week. And while that might prove frustrating for those who prefer more action-driven superhero stories, it’s a savvy shift for Marvel television. None of the previous Marvel Disney+ shows have particularly excelled at plot anyway, so why not lean into the sort of character-based storytelling that TV does best?

Surprisingly, it’s actually the superhero stuff that’s the weakest part of the series. The biggest knock against "Ms. Marvel" is that its special effects are, frankly, some of the worst Marvel has ever produced. Kamala’s cosmic, crystalline space- and shape-bending abilities look more like a rough CG model than a finished effect. And coupled with some vagueness about what her abilities actually entail (they’ve been tweaked from the comics), that robs her early hero moments of some of their tension. 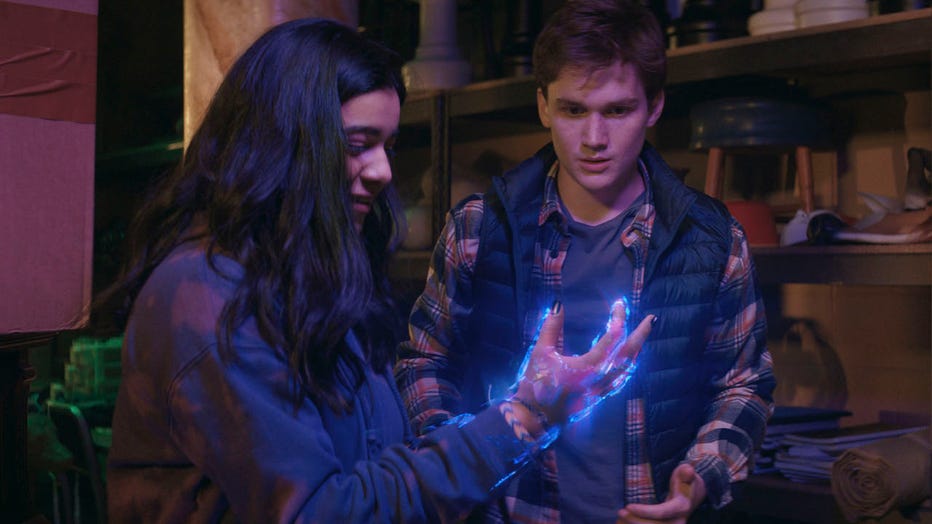 But what the series lacks in whiz-pow superhero effects, it makes up for in heaps of style elsewhere, spearheaded by head directors Adil El Arbi and Bilall Fallah ("Bad Boys for Life"). Kamala’s overactive imagination is brought to life via animated sequences and fantasy interludes. In one memorable moment, graffiti springs to life as she’s brainstorming ideas for how to personalize her Captain Marvel cosplay for the first ever "AvengerCon."

Adding even more flair is a killer soundtrack — expect The Weeknd, Swet Shop Boys and M.I.A. — that gives Kamala’s coming-of-age story a pulsating rhythm all its own. The NERVO & Krewella collaboration "Goddess" (ft. Raja Kumari) scores the montage where Kamala learns to control her powers, while The Ronettes’ 1963 hit "Be My Baby" provides the perfect backdrop for a musical homage to both "Dirty Dancing" and "Adventures in Babysitting" as Kamala celebrates her dreamy meet cute with the handsome new boy at school.

Indeed, while Kamala’s superhero fandom ensures the series is chockfull of MCU references and Easter eggs, head writer Bisha K. Ali brings an equal love for the "girl culture" canon too. "Ms. Marvel" often feels less like a superhero story starring a teenage girl than a teen girl story that just happens to feature a superhero. Love triangles, parental relationships and college plans are just as monumental as cosmic abilities, and one of the second episode’s sweetest scenes begins with a teenage girl casually offering her friend a tampon. 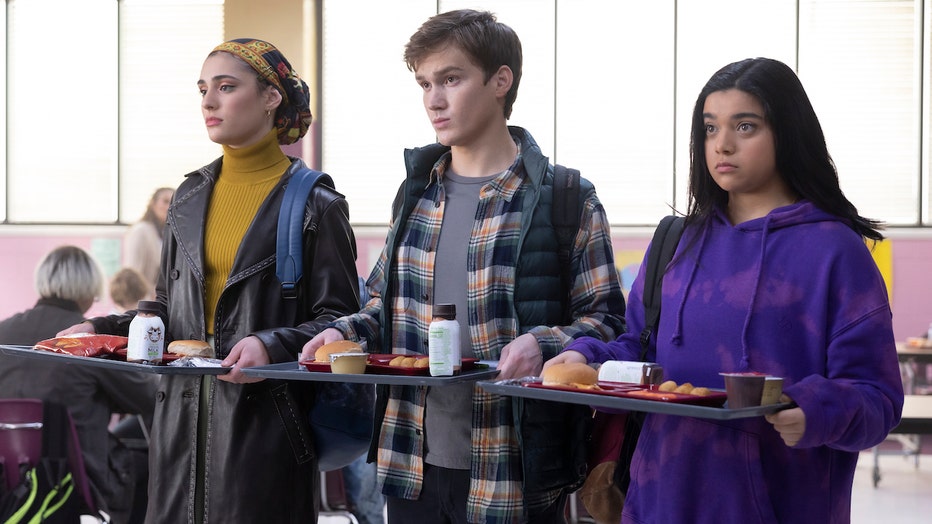 The closest MCU parallel is the John Hughes-inspired vibe the Tom Holland "Spider-Man" movies achieve in their best moments. And that sunny tone is buoyed by Vellani’s pitch-perfect central performance, which combines expert comedic timing that evokes a young Hailee Steinfeld with a sweetness that’s all Vellani’s own. Just as welcome is the specificity layered into the supporting characters, from (mostly) hip school guidance counselor Mr. Wilson (Jordan Firstman) to Kamala’s devout older brother Amir (Saagar Shaikh). While there’s an occasional clunky moment when the show steps back to explain an element of Pakistani or Islamic culture to its global audience, the trade-off is that "Ms. Marvel" gets to balance its somewhat broad sitcom energy with a huge helping of lived-in detail.

Whether it’s two characters bonding over their favorite Bollywood films, an analysis of the social cliques at an Eid celebration or Kamala’s parents sharing some classic New Jersey love for Bon Jovi, "Ms. Marvel" has a wonderful sense of specificity baked into its worldbuilding. Though Kamala’s initial impetus to become a hero stems from her obsession with Captain Marvel (Brie Larson), the early episodes seem to hint that her maternal lineage — including some traumatic history during the Partition of India — will be just as important to her superhero identity.

That means that like so many of the best superheroes, Kamala’s origin story is rooted in her family, her community and her experiences. She just puts a fresh face on those well-worn tropes. It’s a marvel to watch.

Make it a Tubi double feature with "Blinded by the Light"

Blinded by the Light (2019): "Bend It Like Beckham" director Gurinder Chadha brings a delightfully quirky true story to life in this music-fueled crowd-pleaser. It’s 1987 in the small town of Luton, England and the last thing you’d expect a British-Pakistani Muslim teenage boy to be into at the height of the New Wave craze is the music of Bruce Springsteen. But when Javed Khan (Viveik Kalra) picks up one of The Boss’ cassette tapes, his entire world turns upside down. "Blinded by the Light" captures that unique feeling of falling for your first great love (musical and otherwise). And both Springsteen fans and novices alike are sure to be charmed by this funny, thoughtful coming-of-age story. Rated PG-13. 117 minutes. Dir: Gurinder Chadha. Featuring: Viveik Kalra, Kulvinder Ghir, Meera Ganatra, Nell Williams, Aaron Phagura.