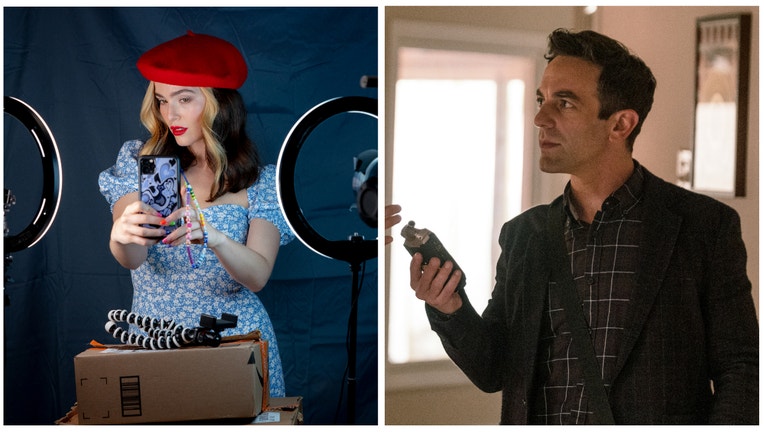 Chicago - In an era where so many people want to turn themselves into online brands, what’s the difference between personal fulfillment and successful brand management? That’s the question at the heart of two provocative dark comedies released this week: B.J. Novak’s directorial debut "Vengeance" and Quinn Shephard’s sophomore feature "Not Okay."

Together, they serve as a portrait of two ends of Millennial self-absorption: "Vengeance" follows a late 30s/early 40s "Xennial" (Novak) trying to milk a tenuous personal connection to make a true crime podcast, while "Not Okay" follows a mid-20s "Zillennial" (Zoey Deutch) who becomes an Instagram influencer by pretending she survived a terrorist bombing.

Both films deploy a curious, sometimes contradictory set of tones to explore the bedlam of our current social media age. And while they’re imperfect but engaging on their own, they’re even more intriguing as a double feature. Read on for more thoughts on each.

RELATED: 10 of the best streaming shows of the year (so far)

Not Okay (streaming on Hulu) 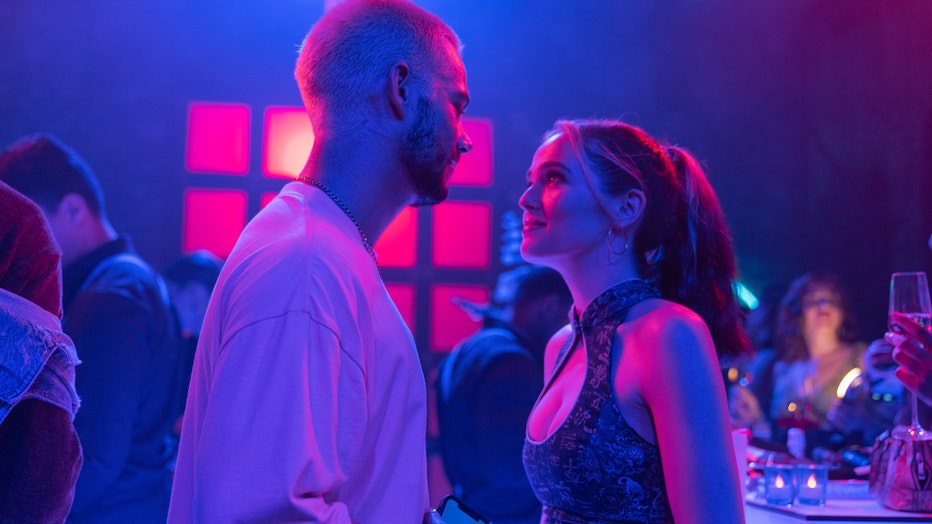 The opening act of "Not Okay" plays like a darkly satirical riff on "Emily In Paris." Looking to make her privileged but humdrum life look more impressive online, photo editor/would-be-writer Danni Sanders (a mesmerizing Zoey Deutch) decides to fake a trip to Paris on Instagram one weekend. But when the city is struck by a series of bombings right near where Danni posted her last faked photo, she sees an even quicker road to online and in-person clout: Pretend to be a traumatized survivor who’s bravely willing to share her story.

WATCH FREE ON TUBI: Zoey Deutch in the provocative teen dramedy "Flower" — get the app

It’s a bitingly acerbic setup that 27-year-old writer/director Quinn Shephard fills with the details of someone deeply steeped in the world of YouTube reaction videos and emotional Insta stories capped off with the perfect emoji. (Dylan O'Brien absolutely nails the dirtbag energy of a bleached-blonde weed influencer.) "Not Okay" opens with a cheeky warning that the film contains "flashing lights, themes of trauma, and an unlikeable female protagonist," and the first act glides along on that gleefully satirical energy.

But around the 30-minute mark, "Not Okay" makes a bold shift in tone. Looking to juice up her story with more lived-in specificity, Danni decides to attend a support group for violence survivors. There one of the attendees reveals that he was at the 2017 Ariana Grande concert bombing. Another named Rowan (Mia Isaac) is the teenage survivor of a Parkland-esque school shooting that left 23 of her classmates dead.

All of the sudden the stakes of the film skyrocket as "Not Okay" weaves these evocations of real-life violence into its heightened social media satire. A big part of what makes "Not Okay" so compulsively watchable is the question of whether Shephard can pull off such a tricky tonal tightrope, particularly as Danni and Rowan strike up a warm relationship as friends and activists; the latter’s genuine trauma standing in stark contrast with the former’s glib self-centeredness. 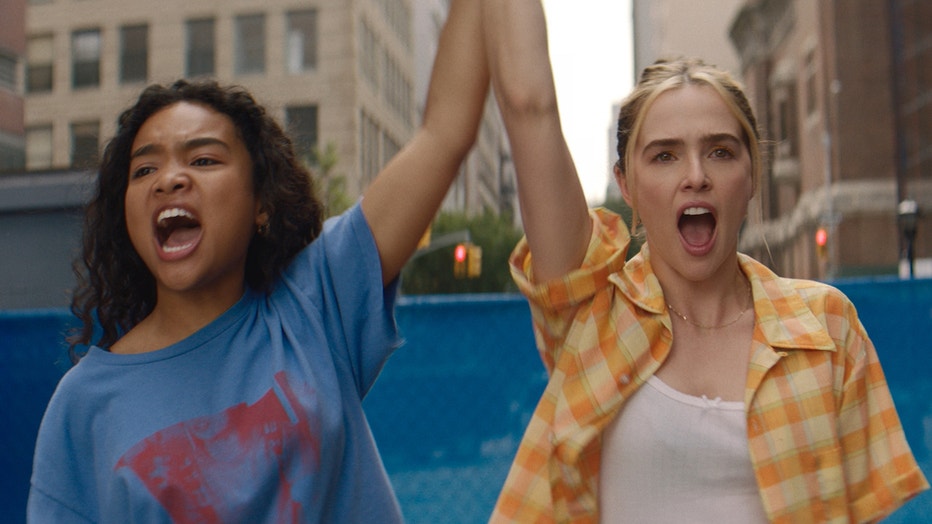 Mia Isaac and Zoey Deutch in the film NOT OKAY. Courtesy of Searchlight Pictures. © 2022 20th Century

Shephard succeeds more than she fails, deploying a provocative tone without ever letting "Not Okay" slip into bad taste. If anything, she’s perhaps a little too gentle in the film’s back half, as "Not Okay" shifts into more straightforwardly dramatic territory. The stylish film ultimately struggles to find its center under the sheer number of digital-age themes crammed into its internet scammer story. Still, the appreciable audacity of what Shephard is trying to do coupled with the stellar work of a uniformly great cast make this off-beat satire worth a "like and subscribe." 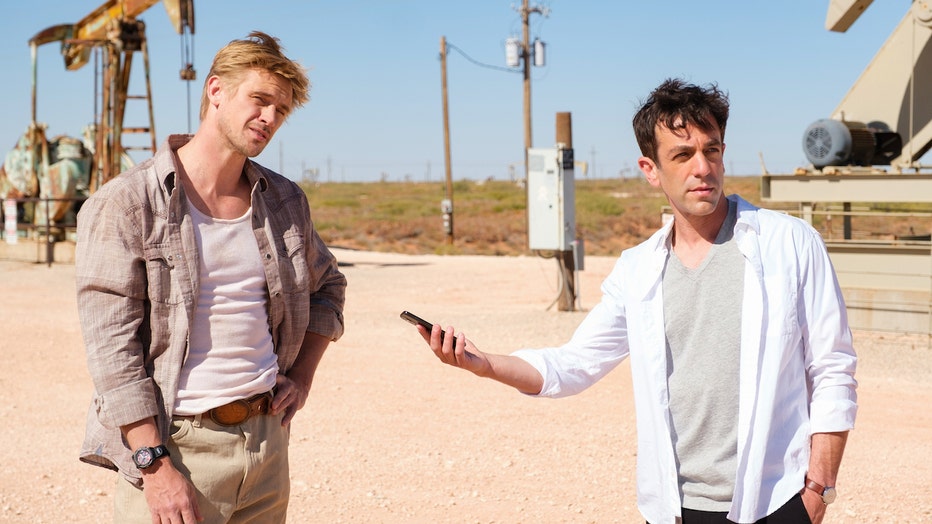 On its surface, "Vengeance" seems like a typical fish-out-of-water comedy: Ben Manalowitz (writer/director B.J. Novak) is a self-important, commitment-phobic Brooklyn journalist who takes an extended visit to small-town West Texas, where he sticks out like a Harvard sweatshirt at a monster truck rally. But that comedic cultural divide is just one of the many, many things Novak has on his mind in his debut feature, which also doubles as a contemporary social thinkpiece and a genuine thriller.

In other words: It’s a movie about a true crime podcast! After being somewhat improbably roped into attending the funeral of a casual fling named Abilene (Lio Tipton), Ben spots an opportunity to create an "existential crime story" about the modern state of America (and a dead white girl, of course). You see, even though Abilene died of a drug overdose, her brother Ty (Boyd Holbrook) is convinced she was murdered by a drug cartel. And under the guise of investigating Abilene’s death, Ben decides to make a podcast about the small town conservative urge to turn to conspiracy theories to explain away life’s problems. Yet the deeper Ben digs, the more secrets he uncovers — and the more he starts to question his own big-city assumptions.

As he proved with his 2021 social issue FX show "The Premise," Novak has clearly spent his post-"Office" years thinking deeply about the state of the world. And while the mix of tones in his debut feature occasionally calls to mind the work of the Coen brothers, Novak’s overt intellectualism gives "Vengeance" its own offbeat rhythms. You never quite know where it’s going, which is the most enjoyable thing about it. And Novak gets great supporting turns from actors playing three very different flavors of Texan: Ashton Kutcher, J. Smith-Cameron and especially Holbrook. 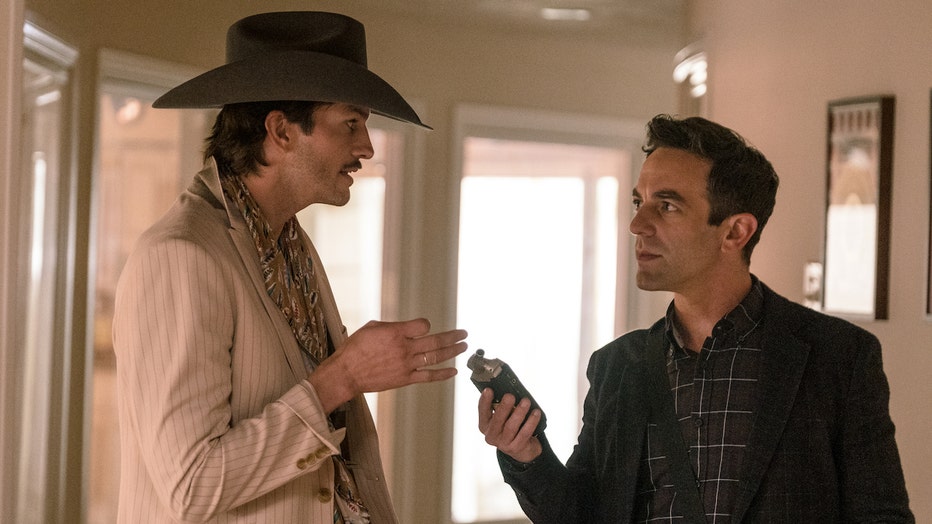 It’s a shame, then, that the movie is about half as smart and thought-provoking as it thinks it is. "Vengeance" has too much on its mind to fully gel, as Novak jumps from ideas about commitment-free modern dating to the human cost of the opioid crisis to the tribal divides of online "hot take" culture. And in trying to avoid patronizing Texans in one way, Novak winds up patronizing them in another, celebrating their small town "authenticity" in a way that feels only skin deep. "Vengeance" ultimately turns out to be a bit of morality play with a moral that feels unearned. Still, the journey to getting there is unique enough (and funny enough) to recommend.

Make it a double feature with "Bad Influence," streaming free on Tubi

"Bad Influence" is streaming for free on Tubi — get the app

How to watch "Not Okay" and "Vengeance"

"Not Okay" is streaming on Hulu. "Vengeance" is in theaters nationwide; it is not currently available to stream.