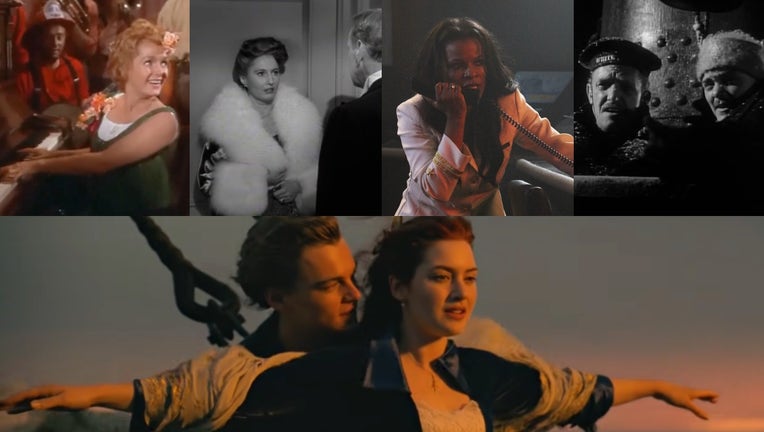 Top, from left: Debbie Reynolds in “The Unsinkable Molly Brown,” Barbara Stanwyck in “Titanic,” Keesha Sharp in “Titanic 666” (photo credit: Tubi), a scene from “A Night to Remember.” Bottom: Leonardo DiCaprio and Kate Winslet in “Titanic.” All scree

It took a month after the Titanic sank for the first film to be released about the event. Even by today’s standards, that is fast. "Saved from the Titanic" starred American actress Dorothy Gibson, and the silent short told a fictionalized story of her real experience aboard the doomed passenger liner. Gibson even wore the same outfit she had on when she was saved that chilly April night in 1912.

The first movie about the Titanic’s sinking is now lost to history — a fire in 1914 destroyed the last remaining copy — but over the last century, there has been no shortage of filmmakers compelled to depict this tragedy. In 1929, the British drama "Atlantic" became the first sound adaptation, though a German version was shot simultaneously. It also holds the honor of being the first of many to include "Nearer, My God, To Thee." This hymn is alleged to be the last song the ship’s band played and has become part of Titanic lore.

Noël Coward’s stage play "Cavalcade" takes place over three decades and features major historical events including Queen Victoria’s death, World War I and the sinking of the Titanic. It was adapted into a movie in 1933 and won Academy Awards for Best Picture, Director and Art Direction. This would begin a pattern of the Oscars tipping their hat to movies featuring the ship’s ill-fated maiden voyage across the Atlantic.

The Titanic was also the subject of a Nazi propaganda feature film released in 1943. The aim was to highlight the British and American weaknesses that the movie cited as the reason for the catastrophic chain of events. It was the first movie to use the title "Titanic," but is far from the last.

With such a sea of Titantic choices, it’s no surprise that the titles traverse a variety of genres including melodrama, musical, and horror. Here are five to check out.

Barbara Stanwyck stars as Julia Sturges, a rich socialite who boards the White Star Line’s crown jewel in a bid to save her children from a life of silver-spoon entitlement. Julia is trying to escape a loveless marriage and return home to Michigan with her daughter and son, but her plans are foiled when her husband Richard (Clifton Webb) manages to secure a ticket at the last moment. It is only in the last third of the 97-minute run time that the iceberg comes into play and much of the movie is taken up by this melodrama. Thankfully, Stanwyck’s performance is compelling and so are the lavish gowns and glamorous outerwear designed by Dorothy Jeakins.

Paternity disputes, flirtatious teens, and an alcoholic priest are foregrounded, but there are some recognizable elements such as unheeded iceberg warnings. "Titanic" was almost given the title "Near, My God, To Thee," which is sung as the ship begins to sink. The Jean Negulesco-directed movie received Oscar nominations for Best Screenplay and Art Direction.

"Titanic" is streaming (for free!) on Tubi.

More than 60 years after its release, "A Night to Remember" is still considered the definitive historically accurate portrayal of the Titanic’s sinking. The Roy Ward Baker film is based on Walter Lord’s 1955 book of the same name, and the author/historian interviewed more than 60 survivors to gather their recollections regarding the voyage. When it came time to make the adaptation, blueprints of the original ship were used to create sets that matched the real thing. It was the most expensive British film ever made at its time of release.

Unlike either movie with the name "Titanic," this portrayal doesn’t spend too much time on specific passengers, and it also gives insight into the nearby vessels that played a role. Rather than spend a lot of time building up to the inevitable, the iceberg is hit at the half-hour mark and the majority of the film’s 120-minute run time is spent reacting to the disaster. The effects are impressive, particularly when considering this is long before CGI capabilities. It is a technical marvel that doesn’t ignore the emotional stakes — there are several gut-punch exchanges.

Margaret "Molly" Brown is a presence in many adaptations of this story (she goes by the fictitious name Maude Young in the 1953 film) and the First Class passenger is remembered for her efforts to save those who had leaped into the icy ocean as the ship sank. Kathy Bates is probably the most recognizable Molly Brown to a contemporary audience, but long before the James Cameron movie, Debbie Reynolds played the new money legend in an MGM musical.

This song and dance affair is a fictionalized telling of Molly Brown’s journey from youth to the "Unsinkable" moniker. Reynolds earned an Oscar for her portrayal of one of the Titanic’s most legendary passengers.

There is so much about the Kate Winslet and Leonardo DiCaprio epic that is baked into the pop culture landscape that just the name of the ship conjures images of the two. Director James Cameron exclaimed, "I’m the king of the world" when he won Best Director at the Oscars, and that line — from DiCaprio’s Jack Dawson — has no doubt been yelled on many boats and luxury liners since then. It became the highest-grossing film of all time in 1998 and it was the first to break the $1 billion mark at the box office.

"Titanic" also took home 11 of its 14 Academy Award nominations, which included Best Song for the "My Heart Will Go On," Celine Dion’s smash hit. Pop superstar Britney Spears later paid homage to the film’s fictional Heart of the Ocean diamond in the "Oops!... I Did It Again" video. And audiences still debate Rose’s lack of door-sharing decades after the film came out, even prompting "Mythbusters" to examine the scene in the "Titanic Survival" episode.

This is one of the biggest movies of all time and it reignited interest in the accident and everything that followed. After several failed expeditions the wreckage was discovered in 1985, which meant Cameron could use real footage of the sunken vessel’s current resting place. "Titanic" owes a debt to "A Night to Remember" and Cameron even consulted with Walter Lord when making the epic. The big difference between the movies (aside from budget and technological advances) is that Cameron dialed up the melodrama with the love story at its heart.

FOX's Ashley Dvorkin joins NewsNOW from FOX's Pilar Arias to talk about the significance of a film like 'Titanic,' what the blockbuster did for the main actors and what's next for James Cameron.

In 2012 it was announced that a replica of the White Star Line ship was being planned and this vessel was going to have a different departure location than the 1912 passengers. This was still met with a lot of raised eyebrows and comments about tempting fate. A decade later and the Titanic II has still not set sail. Now, a new movie is taking the replica reigns and adding a twist of ghostly terror.

"Titanic 666" is the story of the fictional Titanic III, which sets sail from New York City in 2022 — so rather than portraying the real ship’s doomed maiden voyage, the film approaches this story as a horror movie. Influencers, historians, clairvoyants and relatives of original Titanic passengers are on board, but the actions of a stowaway soon unleash a new hell. What we have been led to believe about the events of the original tragedy may be a cover story for something far more terrifying.

"Titanic 666" is currently streaming (for free!) on Tubi, in both English and Spanish.

About the writer: Emma Fraser is a freelance culture writer with a focus on TV, movies, and costume design. You can find her talking about all of these things on Twitter.

Yet more Titanics, all streaming (for free!) on Tubi